A selection of Hymns and Songs
Ives
A Symphony: New England Holidays
Beethoven
Piano Concerto No.5 in E-flat, Op.73 (Emperor)

In his capacity as Conductor Laureate, Michael Tilson Thomas returns every season to the LSO but has only rarely featured music by Charles Ives – a composer central to his repertoire, whom he conducts more perceptively than any other of his contemporaries. 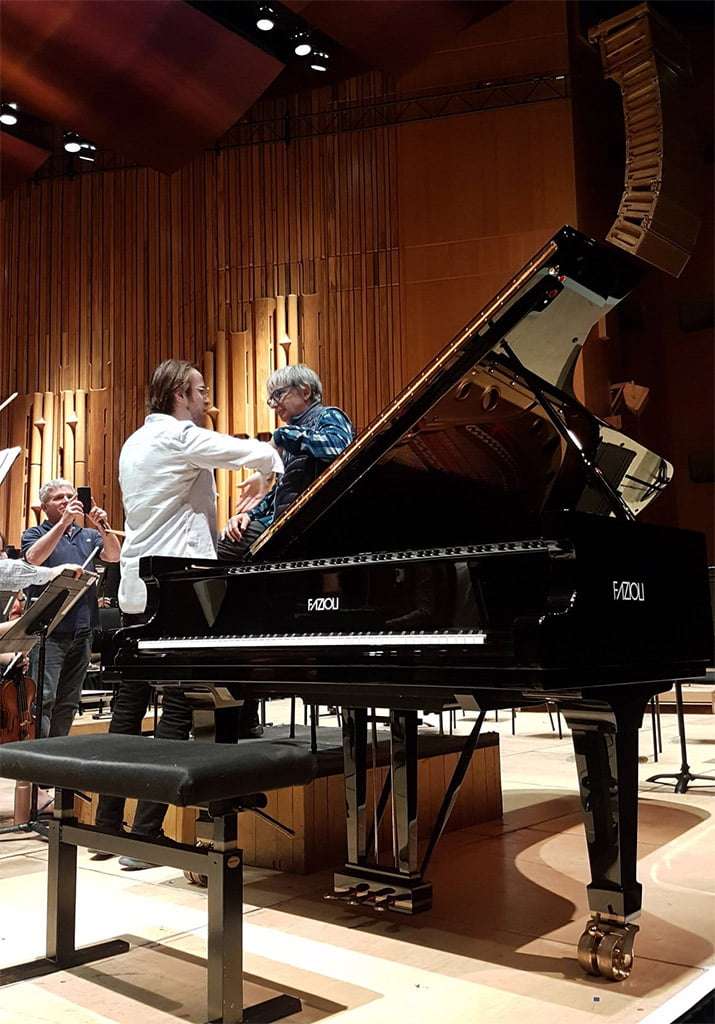 Fortunate, then, that this programme included A Holiday Symphony (to give its abridged title) that Ives compiled from various sources between 1897 and 1913 and which evokes memories of patriotic events around New England in a seasonal succession from Winter to Fall. Not only that, but this piece was presented within a context of the hymns and songs to be heard during its course, idiomatically arranged (including by MTT) and sensitively sung by the London Symphony Chorus. A further enhancement was Ives’s own reminiscences as read by Samuel West before each movement, a legitimate procedure given the composite nature of this work. The conductor ended his initial remarks by requesting the audience reserve its applause until the end of the sequence, thereby encouraging a more attentive response.

The performance was everything one might have hoped. MTT conjured a suitably wintry response from the LSO strings for ‘Washington’s Birthday’, with its uproarious barn-dance interpolation then achingly nostalgic postlude. The shifting tonalities of ‘Decoration Day’ were raptly unfolded, making the brazen march-past at its climax the more startling. Even more so was ‘The Fourth of July’, weaving its allusions into complex textures before an eruptive culmination and laconic pay-off. MTT once described ‘Thanksgiving and Forefathers’ Day’ as among Ives’s greatest achievements – and, whether in the granitic harmonies of its opening, the poignant recollections toward its centre or the choir-capped fervency of its apotheosis, it was hard to dissent in the face of such transcendental power.

MTT gives a comparable overview-cum-performance of this piece in his Keeping Score DVD series with the San Francisco Symphony, and it is to be hoped he will return to the LSO for a similar presentation of Ives’s summative work – the Fourth Symphony.

Enthusiastic as it was, the almost capacity Barbican Hall was evidently there for Beethoven’s ‘Emperor’ Concerto with Daniil Trifonov. There were numerous impressive aspects – not least the soloist’s alternately muscular and lucid playing in the outer movements, and an Adagio whose limpid gracefulness was free of contrivance. Conversely, Trifonov’s concern to play down the rhetoric often undersold this music at expressive cruxes, and the ringing clarity of his Fazioli tended to harden during more-combative passagework. Directing a reduced LSO (just four double basses), MTT was an alert accompanist – but this did not prevent a sense of enervation from at times inhibiting the music’s visceral energy. Certainly, the ensuing ovation felt out of proportion to what had been heard.

Trifonov returned for a lively if unduly arch rendering of the Finale from Beethoven’s E-flat Sonata, Opus 31/3. In view of his admiration for the band King Crimson and his own creative instincts, maybe a concert paraphrase on Moonchild or Exiles would be worth considering.