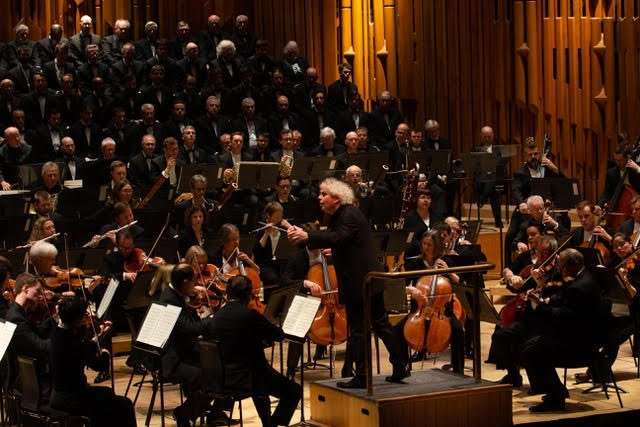 Just occasionally you go to a concert such as this where you know you have witnessed something quite extraordinary. Sir Simon Rattle opened with Berg’s 1934 Lulu Suite, which is a wonderful example of romantic serialism. Unfortunately, the mention of 12-note rows often has people running for the hills, and the row of seats behind where I sat was almost empty, and yet full for the Beethoven. It is difficult to know why this should be the case given that Berg’s multi-faceted score is richly melodic, with, in Sir Simon’s hands, echoes of Wagner and Bruckner. The Suite is divided into five sections, a Rondo (Andante and Hymn), Ostinato, Lulu’s Act 2 Song, before she kills Dr Schoen, Variations from Act Three, and an Adagio precis of the operas last scene with the Countesses dying lament for the woman she loves.

The opening Andante became an adagio in his broad paced conception of the score. Initially the textures were ultra-refined, the string tone glowingly beautiful, every change of tempo was entirely natural and the Hymn had huge weight, without any sense of congestion. There was virtually no change of pace for the Ostinato, but the balance of the parts ensured that every strand was heard and forward movement not lost, while the cataclysmic final chords were earth-shattering. Iwona Sobotka had no problems with the extended range and wonderfully lurid intervals of Lulu’s song, although a couple of notes were taken from below, and far more than usual one was reminded of Wagner.

In the Variations there was a clear sense of impetus and forward movement, with the brief, but nevertheless beautiful clarinet solo superbly delivered by Chris Richards and the equally succinct fairground music was perfectly executed. The long ravishing melodic lines of the final Adagio were sung with Brucknerian majesty; there was gleaming pulsating power and the final shrieks were terrifying, thus ending the finest performance of the work I have heard Live. 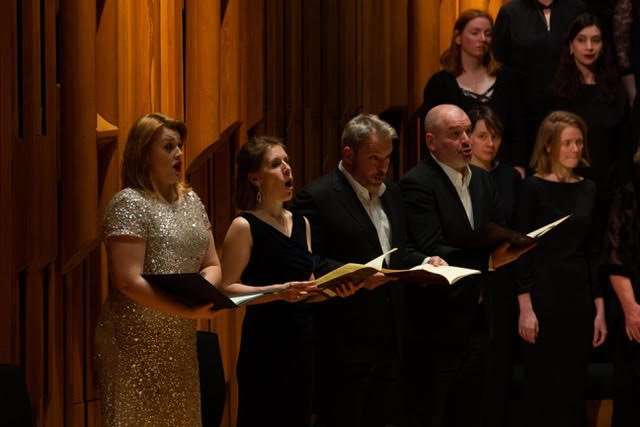 When, in 2015, Rattle recorded the greatest symphony – The Ninth – with the Berlin Philharmonic, he used three flutes and oboes and a chorus of 74, whereas at the Barbican they were four and the chorus was a far more appropriately sized 129. The pianissimo introduction to the first subject was, at a fast but never hectic tempo, rhythmically defined, the forte outburst hewn out of granite. The use of hard sticks meant the timpani cut through, and because they were doubled the woodwind chorales were clearly audible. One also noticed the way in which he leaned on the second half of a phrase, which created a huge sense of sweep and power without ever becoming a mannerism. The second subject was marginally slower with some beautiful woodwind playing, here the timpanist used softer sticks, and there was a very effective rallentando before the return of the opening theme. Indeed, unlike so many conductors today, Rattle wasn’t afraid to slow for the recapitulation and before the coda. The development was given a power-house performance with an absolutely massive climax, where the timpani and brass rang out, and the sense of tension and grip were exceptional, the attack jarring.

As you might expect the Scherzo was fast with the woodwind initially playing in pairs and then doubled, exulting in the chorale like fanfares and here the vital double-bass parts were vividly characterised. Sir Simon’s use of micro-dynamics and internal balancing were exceptional, which brought the music to pulsating life, nowhere more so than when the woodwind seem to improvise over pizzicato strings. There was no relaxation in the Trio, and the combination of alert, spiky woodwind, a superb horn solo and singing lines was unusually satisfying.

The great Adagio molto e cantabile was thankfully taken at a measured pace. The first theme was played ppp: the woodwind chords held, which immediately created a sense of profound introspection. You would have to go back to Otto Klemperer to hear the second subject sung with such heart-rending beauty, the ethereal woodwind over pizzicato strings passage was exquisitely played, and the way Rattle moulded the melodic line harked back to a different age. Given the power of the first movement, unsurprisingly the two forte outbursts were emotionally jarring, the plunge into minor darkness writ large, and from there onwards the movement flowed effortlessly forward to a serene conclusion.

You do wonder what the first audience must have thought of Beethoven’s savage assault on convention at the start of the finale, and Rattle was suitably violent here, the great lower-string recitatives were eloquently delivered, but lacked Toscanini’s trenchant power. As with most conductors Rattle inserted an unmarked, but highly effective pause before the great theme, which started at a true ppp, and was beautifully phrased, which moved to a triumphant conclusion where the power of a full-sized modern symphony orchestra brought a lump to the throat. Florian Boesch is of course one of the world’s greatest Lieder singers but you really need a bass or bass-baritone to deliver the glorious plea for harmony that launches the choral finale, but he, after a little opening roughness and an over-enthusiastic interpretation of the ad libitum marking on the first syllable of “freudenvollere”, delivered a vividly painted account of the Ode. When the other soloists entered there was a real sense of elation, and the full chorus’ final great cry of “vor Gott” knocked you back in your seat. The march was perfectly paced, contra-bassoon suitably prominent. The tenor Robert Murray got so carried away he looked as though he was going to drop his score, and the final accelerando worked perfectly. One could only call the ensuing orchestral fugato, with blaring brass, ferocious, and when the chorus, at full- pelt, launched into the big tune the tempo was slightly faster than in its first appearance, but as throughout the members of the LSC sang their hearts out. The core of the finale is the declaration of the power of God, “Seid umschlungen, Millionen”, which was perfectly paced and massively imposing. Thereafter, every change of tempo and mood was entirely natural, including the way in which Rattle would suddenly highlight a particular word, the pointing of orchestral detail exceptional and the inexorable power of the coda, containing two unusually savage staccato, sforzando chords, which were thrillingly realised.

The moment the final chord died away quite rightly members of the audience were on their feet, and within 30 seconds just about everyone else had done the same. So, a great Ninth and a great concert.