“Que Sera, Sera (Whatever Will Be, Will Be)” – so sung Doris Day nearly sixty years ago. Updating this to the LSO’s Principal Conductorship post Valery Gergiev: will it be Simon, Tony, Mark or Dan? We’ll find out when the Orchestra is ready to tell us. In terms of preferring antiphonal violins, with double basses positioned to the left, there is nothing to choose between them (and it’s Gergiev’s seating plan too). Meanwhile, Sir Simon Rattle presided over this concert that embraced a great Violin Concerto and an equally great Symphony, and added a wonderful piece by Hans Werner Henze. 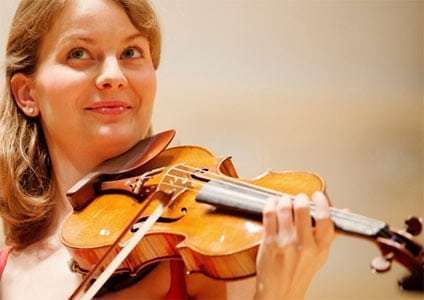 Beethoven’s Violin Concerto received a majestic outing. Rattle and the LSO’s accompaniment was consistently ear-grabbing; indeed at times it rather overshadowed the soloist in terms of character (balance was excellent). Veronika Eberle, a little tentative at times, her violin’s upper register somewhat edgy, was ‘first among equals’, the vision of the work more Rattle’s it seemed (he conducted without a score), and she was very generously part of it, if perfectly capable of some cutting-loose demonstration (not least in Kreisler’s first-movement cadenza), just as she was of bordering on inaudibility, tantalisingly so, yet everything she did carried effortlessly, just as some off-the-radar orchestral dynamics also entranced the ear.

From the off this was a meticulously prepared performance, full of expectation, albeit one in danger of being considered mannered, arch even, yet it worked on the night, orchestral detail gleaming explicitly and afresh (not least from Daniel Jemison’s bassoon). The first movement, creamily expressive in the woodwinds and with fibrous strings, was flexible in tempo, including reflectively spacious, and veered between muscular and delicate. In the opening Allegro it was the ma non troppo qualification that took precedence. These performers were not to be rushed or take a straight line; a timing of 26 minutes is a small part of the story. A magic spell hung over the coda, which survived impolite coughing but not mood-breaking clapping. The Larghetto reinstated raptness, the opening as hushed as you like, daringly so, intensely quiet as if in deep slumber, if then radiantly blossoming, Eberle fully sympathetic to such contrasts, and also in the finale, which danced along with rustic vitality as well as nudges and emphases, the soloist enjoying some Paganini-like fireworks in the cadenza, which seemed just a little misjudged. Overall, though, this was a reading that contained not one bar of routine. 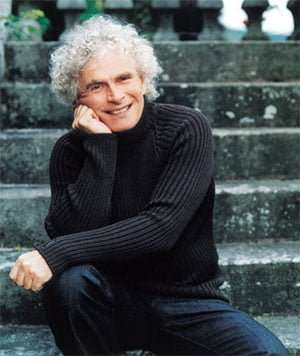 To open the concert’s second half, John Gilhooly, Chairman of the Royal Philharmonic Society (he also wears a Wigmore Hall hat), presented artist manager (at Askonas Holt) Martin Campbell-White with an Honorary Membership of the RPS, first awarded in 1826 and one-hundred-and-thirty times since. Mr Campbell-White has managed a long list of international musicians over many years, including Simon Rattle who graciously saluted his long-time executive and the recipient of the certificate was equally courteous in his acceptance. At which point Rattle suggested we read the words of the Henze to come as the lights would be doused to match music of the night; an apt decision.

In the 15-minute Being Beauteous (1963), Hans Werner Henze (1926-2012) sets Rimbaud’s suggestive French words for soprano, four cellos and a harp. Expressionist and pointillist, also sultry, the harp ticks away the hours of darkness, the music becoming rapturous and seductive, Henze’s palette of colours exquisite and rich. This was something of a Dialogues des Carmélites day-release, for Poulenc’s opera is currently on at Covent Garden (review-link below), Rattle conducting, with Constance sung by Anna Prohaska. She was here for intimate Henze and was totally secure and tonally luminous in covering the composer’s demanding range – nearly off the coloratura scale – Rattle (standing on the shop floor) securing a finely graded response from the LSO quintet in music that is elusive yet found the listener fully involved in proceedings.

At one point the concluding work of this programme was Brahms 4, but the change to Schumann 2 was welcome, for each of this composer’s superb Symphonies tends to be waylaid when compiling concerts, yet have been marvellously served by the gramophone. For all that Rattle reduced the LSO’s string sections (12 first violins, five double basses), there was plenty of attack and fullness when required, but clarity was his watchword, equality between orchestral sections, and an unforced approach with brought lightness and buoyancy to proceedings. If the main dynamic was forte there was a regular subtle variance above and below it, a rise to fortissimo only when needed and quite often a subtle myriad of pianissimo and below dalliances. For all Rattle’s control, there was an irresistible flow to this account, not through swiftness (speeds were moderate) but through springy rhythms, pellucid textures and sureness of direction; the first movement closed with a Celibidache-like ‘softening’ of the final chord. The scherzo was agile and quicksilver, those right-positioned second violins really cutting through the air and electrifying the exchanges, but with something saved for a gold-medal-winning acceleration at the end. If Rattle made heavy weather of the first trio, the second one glowed with feeling, as did the sublime slow movement, quite chaste but with a Tristan-like ecstasy bubbling under the surface. The finale, nimble and articulate, had its apotheosis reached by stealth, not heaven-storming but confidently in-keeping with what had gone before.

There are many ways to play this inimitable music (Sawallisch’s Dresden recording probably remains the library choice), but Rattle’s view, responded to by a mettlesome and considerate LSO (Gordan Nikolitch leading, a rare appearance in this role) was revelatory (I look forward to listening to his Berlin tapings of this repertoire, just issued), and proved to be a compelling triumph for all concerned.