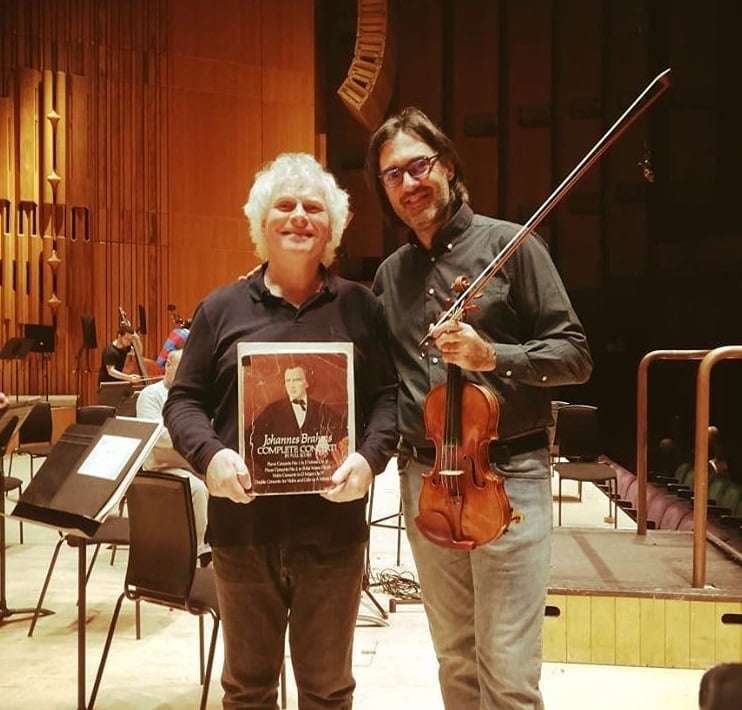 Enescu’s First Romanian Rhapsody is currently doing a London omnibus impression: the LPO played it recently and the Kensington Symphony Orchestra has it earmarked for March 16. Simon Rattle and the LSO offered it as a festive finale rather than an exuberant entrée, but in doing so competed Enescu’s indigenous invention with Debussy’s imagined Spain; and, anyway, ‘Ibéria’ was misplaced as the last of the three Images, upsetting the Frenchman’s symmetrical design.

This concert then, played two nights ago at this address and then in Paris, opened coldly with a Concerto. But we were soon warmed by Brahms’s for Violin, the orchestral introduction eloquently shaped – spacious but with purpose, carefully observed, weighty (eight double basses) yet luminous, pregnant with anticipation for Leonidas Kavakos’s entry – and if you can be both imperious and abandoned, that’s what he was by way of his initial appearance.

Kavakos and Rattle negotiated the first movement with a persuasive leeway of tempo and temperament, the violinist’s tone creamy-rich, gorgeous at times, his intonation spot-on, with the LSO displaying many subtleties of colour, dynamics and details. Joachim’s cadenza was made integral to the (here) twenty-five-minute-plus whole, and to signal the coda Andrew Marriner’s clarinet riposte was a model of sensitivity. Equally exquisite was Juliana Koch’s oboe preface to the Adagio, arguably too spacious in relation to what had gone before if communing raptly on its own terms … and you could sense an attacca into the Finale several seconds before it arrived, the movement given with fire and an intense singing line. 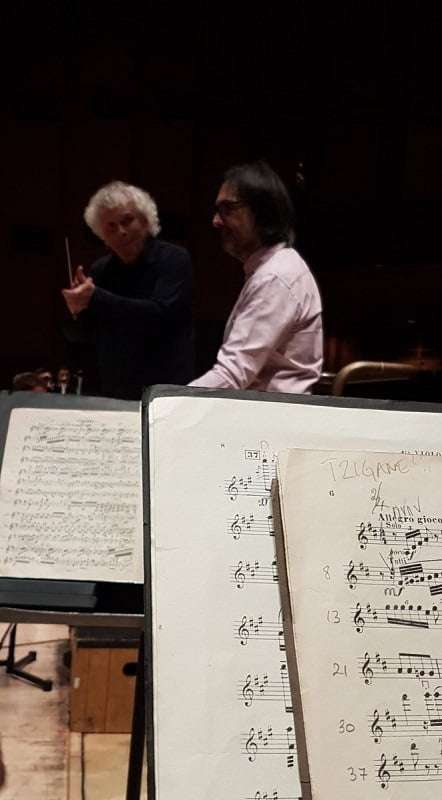 Of Debussy’s Images, amongst his finest souvenirs, ‘Gigues’ (the English leg) was spectral and refined, translucent, dripping with sentiment, with some deft mute extrication from the trumpeters (now on silver-coloured instruments, they were gold for the Brahms). If ‘Rondes de Printemps’ is stylistically similar to ‘Gigues’ (another reason not to juxtapose them) it was nevertheless of fluidity and freshness to shimmer and shimmy the arrival of Spring, with just a hint en route of Winter linger. The first section of ‘Ibéria’ was ideally relaxed yet pointed – a tour in a vintage jalopy rather than a souped-up sports car and with a notable diminuendo to explore byways. In the second segment nocturnal perfumes and resonances were wonderfully conveyed (transporting me back forty years to the Royal Festival Hall when Celibidache and the LSO of that era worked a miracle with this music), here strings and horns were notable; and then the morning of a fiesta day, brought off with celebratory panache.

As for the Romanian Rhapsody, a masterpiece of notated improvisation, folk-music and strolling-player instrument sound-a-likes (harps as cimbaloms, flutes as panpipes), there was a twinkle-in-the-eye opening from woodwinds, the textures remaining airy as the piece developed into a right old knees-up, Sir Simon leading from the front with textbook gestures and some rather less so, the double basses really swinging. I am less certain about the vocal adornment to the ultimate chord, but I don’t want to be a party pooper.