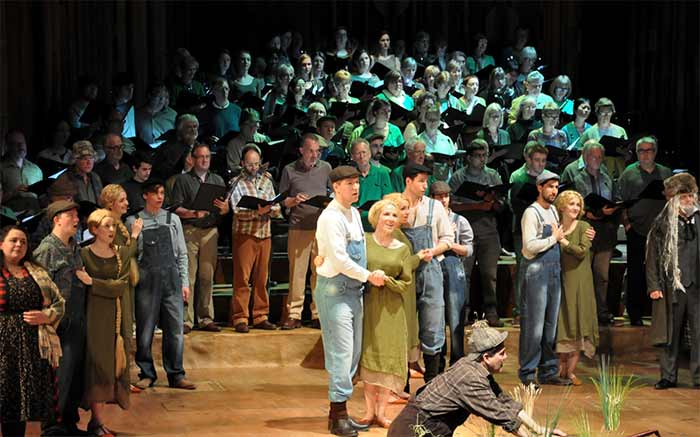 Becoming firmly ensconced in the LSO’s seasons, this Discovery strand of commissioning works for young people (started last year with Jonathan Dove’s The Monster in the Maze) was all the more moving this year as it was the premiere of Peter Maxwell Davies’s The Hogboon. Max – as he was forever known – died on 16 March, some six months after putting the finishing touches to the score of his last-completed major work, mostly composed while undergoing treatment for the reoccurrence of cancer. It seems remarkable that such life-enhancing, enjoyable music for young and amateur musicians alongside professionals, could come from the pen of a seriously ill octogenarian, but belief in the power of music (and, by extension, art) was what Max was all about. As such it was the most fitting epitaph to this great composer.

The tale, of Max’s own making, adopts and melds various folk traits and is set, appropriately, around his beloved Orkneys. The island kingdom, led by the Earl or Orkney, is threatened by the sea monster Nuckleavee. Dreamy seventh son of a seventh son, Magnus, although chastised by his six elder brothers is encouraged by his mother, who says he may yet be the island’s saviour. Calling on the benign household spirit, the Hogboon, and with advice from the Good Witch and her cat, Magnus is able to lull the Nuckleavee into a false sense of security so that it starts to yawn. Following the Good Witch’s instructions, on the seventh yawn Magnus thrusts a smoking peat cinder through its gullet and onto its spleen. The monster’s ensuing anguish brings compromise; by agreeing to alleviate its pain the islanders get an agreement from the Nuckleavee not to threaten them again. As a reward the Earl not only offers the magic sword to Magnus but also his princess daughter, while his six brothers are betrothed to the six golden-haired maidens who had been in danger of forming the Nuckleavee’s breakfast. And it all ends in joyous celebration, though not without a warning that if they don’t continue to live in peace with the environment, the Nuckleavee will return.

In response to the variety of performers, Max responds with tonal music (much, as Christopher Austin’s detailed notes and synopsis noted, in D-major), and a variety of infectious musical styles, including Scottish reels. But it starts with a dark, sinewy melody for the violas, which reminds instantly of the opening of Mahler’s Tenth Symphony. The orchestra, stage-left, was joined by mufti-dressed London Symphony Chorus, setting the scene of fear in the face of the sea monster, eventually standing at the back, stage-right. Students from the Guildhall School were both the six elder brothers and the six maidens, while Senior LSO Discovery Choir members filled out the populace and were the cat’s kittens. But the greatest coup de théâtre is the Nuckleavee, the dark boiler-suited, kelp-spattered Junior LSO Discovery Choir who entered through the auditorium and sang its first chorus amidst the audience, claws out and grimacing all the while. There was a touch of Verdi tub-thumping to the Nuckleavee’s capitulation, the negotiations for peace and final chorus, aided by the return of the off-stage (nestled in the corner of the balcony) band of trumpets and percussion. And Lucas Pinto raced around with gusto in the silent role of the bat, a silhouette-like open-winged effigy held high at the end of a long pole. 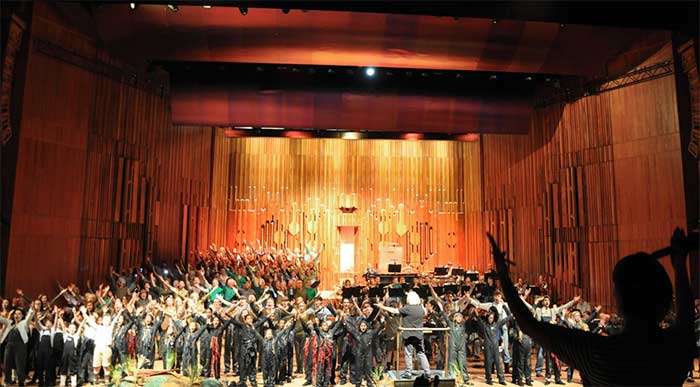 As it happens, Mark Stone’s Hogboon had relatively little to do, while Sebastian Exall excelled with youthful optimism and confident delivery. Karen Gillingham directed the multifarious forces with the minimum of fuss, although the minimum of set (a moss-covered mound and a couple of peat fires) and lack of any real character development might make cantata-style performances more appropriate in future. Simon Rattle entered amidst the chorus at the start, but was in the traditional central position, marshalling everything with quiet authority. But, in this oddly beguiling rehash of Seven Brides for Seven Brothers, it was the kids that stole the show. I’m sure that’s what Max would have wanted, and it was a great way to pay belated respects to him. Not surprisingly, the concert was dedicated to him, while he himself had dedicated The Hogboon to HM Queen Elizabeth II on the occasion of her 90th-birthday.

But that was only half the concert. An extended interval saw the platform reset for the joint forces of the London Symphony Orchestra (in black) and Guildhall Symphony Orchestra (white tops) to perform Symphonie fantastique. This marked something of a full-circle for me, as the first concert I ever saw Simon Rattle conduct, on 27 November 1979 (Philharmonia Orchestra, Royal Festival Hall) ended with the Berlioz.

I can’t remember exact details from over thirty-six years ago to report whether his view of the work has much changed. But what I can tell you is that this LSO account was not just an aural assault on the senses but a physical one. The string sound had amazing presence. Rattle was at his most flowing, allowing the music to speak naturally with little interpretative interference, making the most of six harps in the ball scene and allowing Christine Pendrill’s cor anglais solo to float lingeringly at the start of the third movement, to be answered by Fabien Thouand’s off-stage oboe. From there Berlioz’s opium-induced musical vision degenerates through decapitation (at the drum-laden climax of ‘March to the Scaffold’) to the ‘Witches’ Sabbath’, where the artist’s muse, earlier sounded most often by Andrew Marriner’s silky clarinet, transferred to Chi-Yu Mo’s devilishly squeaky E-flat counterpart.

This was a virtuosic, colourful and kaleidoscopic performance, which was thrilling. From a benign household spirit and a sea monster to a coven of hysterical witches, Simon Rattle here ran the gamut of orchestral effects to win a cheering ovation, in what was the 2016 City Livery Concert.