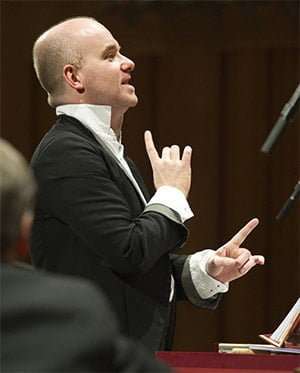 The climactic offering of this year’s Lufthansa Festival was Joshua (premiered in 1748) one of the oratorios Handel wrote to exploit the triumphal mood following the Hanoverian dynasty’s second defeat of the Catholic Jacobite threat, in 1745. However, in this performance under Laurence Cummings and his forces from the respected International Handel Festival in Göttingen, it was not so much the military bombast which came through in Handel’s re-telling of Joshua’s successful entry into Canaan with the Israelites, as the rather more human aspects of Othniel and Achsah’s love and the celebration of peace and liberty. Incidentally, Göttingen has its own Hanoverian connection, in that its university was founded by George II in his capacity as Elector.

Kenneth Tarver, as Joshua, tended to sound more lyrical than bellicose, making this a very sympathetic characterisation. Nevertheless, Tarver also proved to be a galvanising force when he stirred the Israelites in his aria ‘With redoubled rage return’ after a military setback. Sometimes, though, his singing was marred by a slight inclination to bellow in the upper range. As a tenor too, there was something of a nasal ring to Joachim Duske’s singing as the Angel.

No such problems beset Anna Dennis or Renata Pokupić as Achsah and Othniel respectively, both of whose performances were bright and well matched musically – particularly in their two duets, the first a charming pastoral idyll, here with duly relaxed support from the Festspiel Orchester. Dennis’s interpretation of her arias was sometimes undistinguished, though sincerity and passion informed ‘As cheers the sun the tender flow’r’ and there was a tender eloquence in ‘Oh, had I Jubal’s lyre’. Although Pokupić’s skills as a Handelian were not in doubt, she often seemed bound to the score, and tied up with words and notes rather than singing spontaneously as can confidently be expected from her.

As English is not his first language, it is understandable that Tobias Berndt’s words were not always clear in the part of Caleb. But he was no less committed to the narrative for that, extending particularly heartfelt emotion to ‘Shall I in Mamre’s fertile plain’, where he looks forward to ending his days peacefully in the Promised Land.

In presenting the original 1748 version of this Oratorio, this gave the choir the opportunity to render the famous ‘See, the conqu’ring hero comes’, written for this work first and only later transferred to Judas Maccabaeus with which is it now universally associated. The NDR Choir’s swift, dance-like manner helped to deflect successfully any too militaristic an account of the drama. Throughout, these singers took their part not simply as a detached commentator upon events, but as fully caught up in them in the role of the Israelites as the other characters. Although prior knowledge and intuition enable an audience to foresee the victorious outcome of Joshua’s campaigns, the choir still conveyed a sense of anxious expectation in ‘May all the host of Heav’n’ at the end of Part One which did not load the dice in musico-dramatic terms.

Cummings also maintained a cogent urgency with the orchestra without rushing, thereby revealing deeper layers to this work than a mere piece of occasional celebration – a judgment which appears to have caused its relative neglect in the concert hall for at least a century. This was a stimulating end to another intelligently devised Lufthansa Festival.