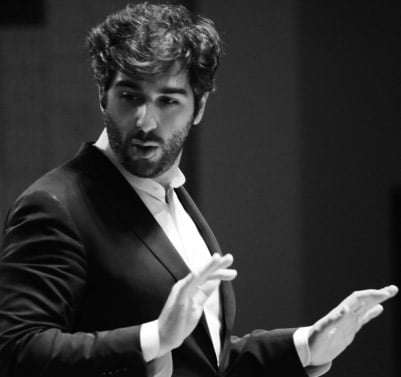 Founded in 2005, the Armenian State Symphony Orchestra – despite its old-fashioned ‘Soviet’ labelling not to be confused with the venerated Armenian National Philharmonic of Spendiaryan, Gergiev and Tjeknavorian memory – is best in the string department but, on this showing, weak in the woodwind, which need improved definition, commitment and character, the section principals oddly disinclined to ‘speak’ or take the lead when necessary. Wanting in charisma, its founder and music director, Sergey Smbatyan, is a busy, flapping presence on the podium, rarely given to grace. Dispensing with baton, small in physique, inclined to over-conduct, with misplaced energy and fussily confused cueing, hands vaguely synchronised in ungainly semaphore motion, nose in score, he negotiated his way through the delayed-start (no interval) evening with determination but only variable musicianship. In his biography he name-drops Gergiev, Muti and Colin Davis among his influences/inspirations. For the life of me I can’t imagine what he’s learnt from any of them, least of all the poised connoisseurdom of Sir Colin.

Best overall, overcoming Smbatyan’s interventionist, expressively decontextualised style, jarringly distracting at times, were the Vocalise and the valedictory closing pages of the first of the three Symphonic Dances. Elsewhere, the music dragged, the tension was loose, and the body-language of the players suggested weariness and disinterest, the notes dispatched dutifully with neither spark nor flare. A recessed alto-sax and curiously obscure timpani, hard sticks notwithstanding, left a toothless impression. More salt-and-pepper, some Caucasian seasoning, would not have gone amiss.

Playing a balanced but indifferent Fabbrini Steinway shipped in from Italy, Nikolai Lugansky, every now and again raced uncomfortably, dispatched a coolly efficient Paganini Rhapsody, the notes and bravura professionally clean, the emotions reserved. In the slower sections and Variation XVIII he went further, though his attempts at more expansive phrasing and darker lining were too often thwarted by Smbatyan’s short-winded approach. Fluffed last note aside, his encore – Rachmaninov’s G-sharp minor Prelude, Opus 32/12 – cast a spell of sorts, the Respighi-like left-hand ‘orchestration’ of the reprise holding the attention. All in all, though, it was job done rather than any artistic highs.