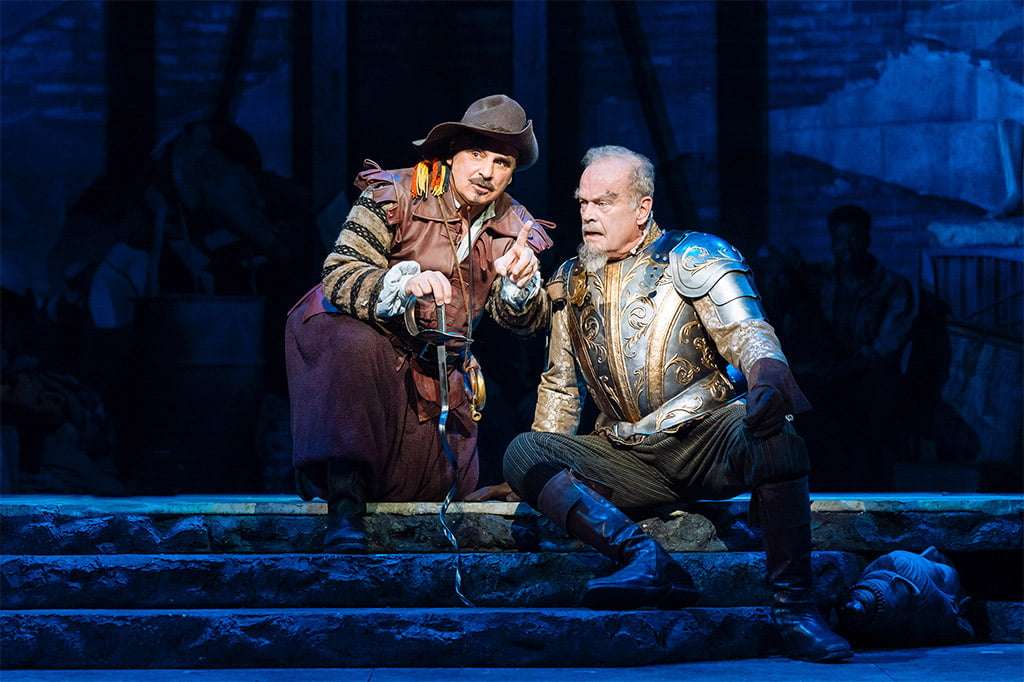 This year’s Spring musical to take over the London Coliseum, following Sweeney Todd, Sunset Boulevard, Carousel and Chess – all co-produced between English National Opera, Michael Linnit and Michael Grade – revives the 1960s show based on Cervantes’s epic Don Quixote, Man of La Mancha, for the first time in the West End (running to June 8) since it opened at the Piccadilly Theatre, starring Keith Michell, in 1968.

Famous for its rousing anthem ‘The Impossible Dream’, it was one of those musicals I’d always wanted to see; my interest whetted having much enjoyed James Fenton’s Cervantes’s adaptation for the Royal Shakespeare Company that brightened the winter nights one street over at the Garrick Theatre. Like London buses, you wait ages for one Quixote to arrive then two arrive hard on each other’s tails. The differences were instructive, but I’m glad I’ve seen both.

Kelsey Grammer – best known as the small screen’s favourite psychiatrist, Dr Frasier Crane – is not new to London. Intriguingly his debut was in one of London’s tiniest musical venues, The Other Palace in 2017 for Big Fish and here he transfers to the capital’s largest theatre. He’s joined by Danielle de Niese as Quixote’s ideal courtly woman Dulcinea, despite her constant protestations that she falls much below his exalted ideas of her as just plain Aldonza. And it’s de Niese that electrifies the production. The Overture is exhilarating and while some might find the insistent Spanish rhythms in Mitch Leigh’s score waring, I quite happily toe-tapped my way through the evening. 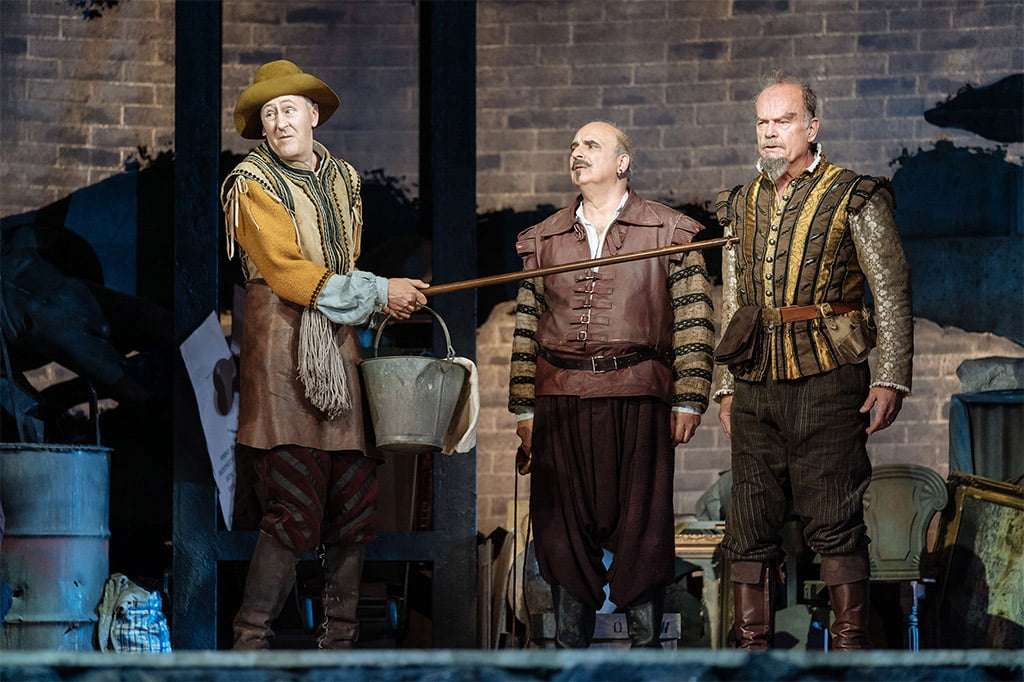 Grammer struts a rather diffident figure – or rather three figures: the author Cervantes, thrown into prison at the start by the Spanish Inquisition and forced into a mock trial by his fellow prisoners where his defence is his theatrical fiction about the aged Alonso Quijano who, in his dotage, imagines himself as the resurrector of chivalry, Don Quixote. But Grammer can rise to the heights in his appeal for people to return to civility and goodness – a message that cuts straight through to the present. While his singing is croaky, it fits his characters and (spoiler alert) Quijano/Quixote’s death scene is very affecting. In comparison to the RSC’s David Threlfall (who grew his own beard for Stratford and London), Grammer offers a more generalised characterisation and his partner-in-crime Pete Polycarpou isn’t allowed to develop Sancho Panza in the hilarious freewheeling way Rufus Hound was able to do as a foil to Threlfall. Although Grammer mentions Polycarpou’s use of metaphors, there are hardly any ensuing, whereas Hound had an unquenchable fund of them.

The other striking difference between the two productions is the equivalent of light and shade: the RSC was played out on an empty light-wood stage, evoking the Spanish sun whereas Lonny Price’s production takes its design cue from Dale Wasserman’s framing device, the imprisonment of Cervantes. We’re in a dingy, subterranean dungeon, accessed only by a huge metal staircase. With graffiti on the walls and modern-dressed prisoners, it’s as if we’re in a contemporary Fidelio. While medieval costumes brighten the main story, there is an overall lack of brilliance in the proceedings.

And, at the beginning of the second half, the action gets very dark with the hounding of de Niese’s Aldonza by the men of the inn. Such action might enhance the comparison with Don Quixote’s kindness and chivalric behaviour (with a pay-off when Aldonza visits the Don on his deathbed, jolting his realisation that what he thought was a dream had been real), but it’s harder to watch now than it would have been in the 1960s. At the end, having first spoken a reprise of ‘The Impossible Dream’, de Niese gets a change to sing it at full blast in the final chorus: a thrilling punch to the solar plexus. 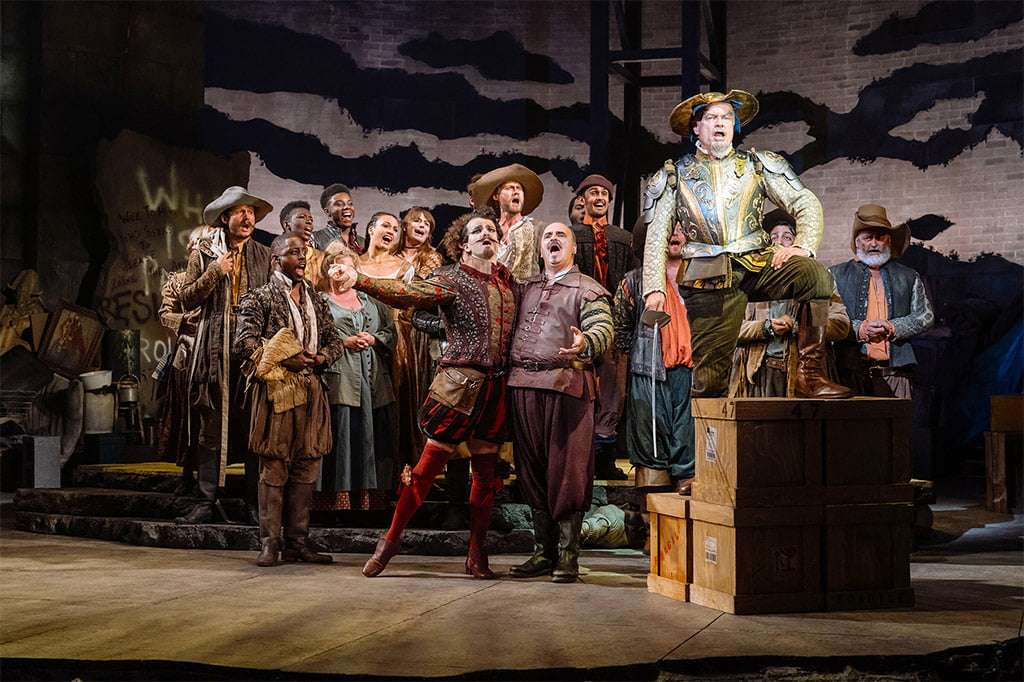 Wasserman’s book, based directly on his television drama entitled I, Don Quixote (starring Lee J. Cobb and Eli Wallach as the mismatched pair) decimates the humorous scrapes from Cervantes’s original. While the tilting at windmill episode survives it is rather lamely done here, with just a projection of the sails turning on the back wall (Threlfall flew). What Wasserman does do is bolster the part of Quixote’s ‘supposed’ Dulcinea. De Niese needs no excuse to grab both parts and run with them; vibrant in her red dress as she is in her energetic stage presence and thrilling vocalisations.

There’s a drolly understated Janus-sided performance from Nicholas Lyndhurst as the tipsy Innkeeper (hilarious in the dubbing scene) and the stony-faced, leather-coated self-appointed Governor in the cells (presumably Price would not have known the reference to Allo Allo’s Herr Flick), adding some intermittent humour. And there’s a large supporting cast of prisoners, gypsies, drinkers at the inn, most of whom dazzle with mirrors in Quixote’s final challenge against the Knight of the Mirrors where he is forced to see himself as he truly is, while the reflected beams fill the Coliseum – for once – with shafts of light.

For anyone, like me, who has never seen the show this remains a must. It opens just as next year’s musical collaboration is announced, the return of Michael Ball in Hairspray – for a twelve-week season.