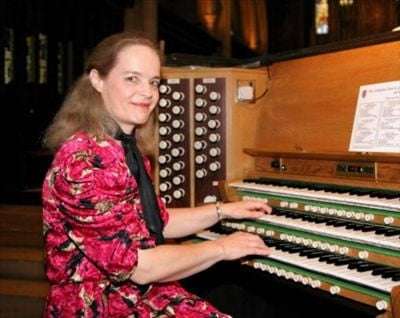 Margaret Phillips and the Royal Festival Hall organ go back a long way – she was a student of its first curator Ralph Downes and helped him work out the registrations for his recitals by playing through the pieces while he listened in the auditorium, judging the various combinations.

Her programme was judged as much to show off her sympathies as to demonstrate the organ’s adaptability to the major schools of organ building, and the preponderance of 20th-century French music only reconfirmed the instrument’s orchestral and solo-stop versatility. Phillips started, though, with a deferential nod to the French Baroque with music by J. S. Bach’s short-lived contemporary Nicolas de Grigny. She laid out its style with admirable directness – acidic hissy-fits of reed-chorus dialogues, extended decorations that almost part company with the note they’re embellishing, and a sizzling rather than upholstered organo pleno full of grandiose French bluster.

The difference between French and North German Baroque was succinctly stated by her following piece, Bach’s G-major Fantasia, even if it aspires to the French manner. Given the scope of the instrument, it was surprising Phillips didn’t use any echo effects in the airy opening ‘Prelude’ – a question of taste, I suppose – but the grandeur of the central section was delivered with considerable panache.

The inimitable catholic mysticism of French organ music of the last century is for many still the pre-eminent contemporary style, and with its inspired assimilation of plainsong has lost none of its power – at least to judge from Phillips’s account of Maurice Duruflé’s Prélude, adagio et choral varié that became a spiritual, musical and instrumental work-out of persuasive integrity, guided by the impeccably registered stillness of her playing in the central part leading into a brilliantly conceived reading of the Finale. For once, I rather missed the resonance that helps caress the music’s swagger, but at least now there is a hint of linger in the Festival Hall’s new, or newish, acoustic.

The 18 Variations by Jean Guillou inhabit a very different world, gnomic rather than cosmic, based on a theme that itself sounds like a variation, with many fractious dialogues, special and spatial effects, a stunning pedal solo and bizarre noises-off from the organ’s deepest recesses. The music implies a non-liturgical programme – and whatever it is, Phillips vividly and efficiently characterised it, but it was her noble performance of Marcel Dupré’s G-minor Prelude and Fugue that clinched the quality of the recital.

Phillips’s encore was Shalom by the Dutch organist-composer Toon Hagen, a haunting piece with a gently pulsating accompaniment supporting a remote, high-flute melody. It would do rather well as the credits-accompaniment to the bleakest Scandi-noir TV series.