Prokofiev
Romeo and Juliet, On Motifs of Shakespeare – Ballet in four acts [realised by Simon Morrison] 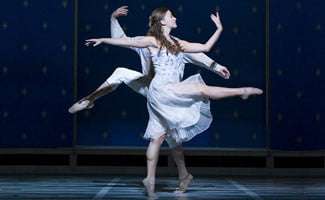 Certain masterpieces feel so ‘right’ in themselves that the very idea of their being the outcome of a revision, let alone one undertaken unwillingly, is hard to take on board. Yet Prokofiev’s ballet Romeo and Juliet seems to be one such: commissioned by the Bolshoi Theatre (Moscow) in late 1934, composed in 1935 and its run-through given a lukewarm reception early the next year, it remained in abeyance (other than an incomplete ‘out of town’ production at Brno in 1938) until a production by the Kirov Theatre in Leningrad early in 1940. That revised version has since established itself at the very centre of the ballet repertoire, arguably outstripping even Tchaikovsky’s ballets in terms of its popularity.

All of which makes this presentation of the original version, first seen in New York last year and now receiving its European premiere under the auspices of the Barbican Centre’s “Bite 08” season, the more intriguing. Yet Romeo and Juliet, On Motifs of Shakespeare is the title that Prokofiev (partly on the urging of cultural advisors) gave to this urtext – underlining the radical deviation from Shakespeare’s drama in its final stages. This involves Juliet’s regaining of consciousness before Romeo takes his own life, the lovers then being reunited by Friar Laurence and departing – prior to the re-emergence of their warring families, who quickly drop their vendetta – into an abstract nirvana of unending bliss. 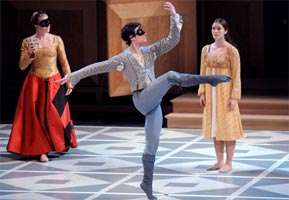 In terms of the actual music, the differences in the first two acts are largely those of scoring and dynamics – the textures being lighter and airier to a degree that looks back to Prokofiev’s Western ballets rather than the Soviet stage-works to come, with several dances reordered or their music given a different emphasis (the climax of the ‘balcony scene’ closing Act One a case in point). With Act Three, differences are more marked: the scene of parting is no emotional epic, while the dances here presented by Paris to the somnolent Juliet are either to a radically different scenario or were excised altogether. In Act Four, where the initial scenario proved the real sticking-point, the music of the lovers is considerably reordered to reflect its being a transition more than the denouement, while the return of the families is enacted to music that was recycled to become the scherzo in the Fifth Symphony. The denouement itself is made a pas de deux for the lovers – an abstract set-piece drawing on earlier themes that deftly sublimates the work’s expressive essence. 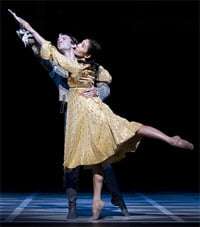 The ballet unfolds with real inevitability: a reflection, no doubt, of this production from the Mark Morris Dance Group. Those used to the drama of earlier conceptions may well find Morris’s approach unduly low-key, with little in the way of grand gestures and a preference for symmetrical distribution that finds fruitful outlet in the confrontations between Montagues and Capulets – that which follows the death of Tybalt the most arresting case in point. The frequent recourse to hand gestures during the crowd scenes can verge on affectation, but there remains an overriding sense that stage-movement in this production is being governed by musical considerations rather than a visual veneer which has been merely laid onto and, as such, fails to interact with what is heard.

The staging itself might be described as ‘abstract traditional’ – Allen Moyer’s evocation of a period setting one that provides a believable yet rarely limiting context for the drama, enhanced by Martin Pakledinaz’s vibrant though never garish costumes and James Ingalls’s generally restrained lighting. The main set is as effective in terms of massed crowd-scenes as in intimate interiors, while the transformation to a final scene of starry abstraction could hardly be seen as other than appropriate. 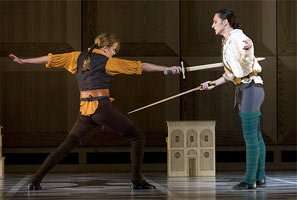 Whether visually or expressively, the dancers are rarely less than ‘in character’. Noah Vinson has a youthful ardency yet also reserve that makes him ideal as Romeo, while Maile Okamura is even more the epitome of Juliet in all her gaucherie and stubbornness – the scene during which she consumes the potion as touchingly enacted as it is exquisitely nuanced. The one controversial touch is in allotting Tybalt and Mercutio to female dancers, but Julie Warden exudes a manly aggression that contrasts effectively with Amber Darragh’s overtly foppish Mercutio; the two roles coming together as if to suggest complementary sides of a single personality. Lauren Grant is appealing as the alternately stern and yielding Nurse, while John Heginbotham brings both wisdom and warmth to Friar Laurence. Joe Bowie is imperious as Escalus and Dallas McMurray is a notably conciliatory Benvolio, with Bradon McDonald an unusually earnest and sympathetic Paris. The parental quartet, too, is capably realised.

Live ballet rarely has the benefit of a world-class orchestra, and the London Symphony Orchestra (some 50 strong on this occasion) audibly relishes its rare opportunity ‘in the pit’ – a few cracked brass notes and exposed string entries hardly detracting from the overall quality of its contribution. It helped to have so able a conductor as Stefan Asbury in charge of proceedings: far too little known in his own country, he brought an expressive keenness and a tensile rhythmic emphasis to the score, besides shaping phrases with a poise that accorded well with the music as Prokofiev initially conceived it.

There remains, of course, the question as to what that initial conception was intended to achieve. Current commentators – including biographer Simon Morrison, who took on its realisation as part of researches into the composer’s Soviet years – seem convinced that it represents the manifestation of Prokofiev’s Christian Science convictions in terms of death being outdone by a promise of eternal life. Could it not, however, have been one of numerous attempt by Prokofiev – albeit abetted by his new Soviet colleagues – to demonstrate his Socialist Realist credentials in the trouncing of bourgeois enmity and division by uncorrupted and indivisible (i.e. – Socialist) youth; such as fell foul of the Soviet officialdom as Stalinist cultural constraints became ever tighter? Put another way, is the work as heard here demonstrably superior to its revision as the outlet for some of Prokofiev’s most indelible music? Issues which are worth pondering in the light of what is thoughtful and intelligent production.