After much acclaim, popularity and international touring, Matthew Bourne’s individual take on Swan Lake, now in its fifteenth year of success, has returned home to Sadler’s Wells, this current run also finding the show’s director and choreographer reaching his 50th-birthday. 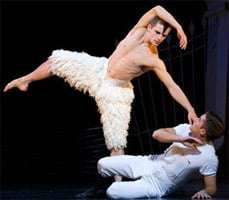 Bourne’s version of Swan Lake is not, as has been supposed in some quarters, either all-male or, given that there is indeed a distaff side, chaps in drag. The twist is that The Swan itself is manly (and name-less, no longer Odette) and the corps of swans is also male. In a sense such a change is neither here nor there, unless you want to make something of it, and Bourne is adamant that there is no hidden intention or obvious agenda.

The premise of the story is the search by The Prince to find love and to lose the shackles of his royal existence. The physicality and unanimity of the swans is one of the strongest aspects of this production; so too the palpability of ultimate tragedy. Bourne’s is not a Classical Ballet conception; rather, to quote him, it is “contemporary dance/theatre” if stylistically wide-ranging and sometimes a bit contrived (and not necessarily always fitting-in with Tchaikovsky’s glorious and grand score). Bourne’s choreography is also elegant, witty and, above all, a moving expression of emotions, powerfully cutting to the core of the narrative and involving the audience in both a human and a dreamlike experience; there is also quite a lot of divertissement, such set-pieces handled with grace and smartness, and attractively designed, too.

To determine the principal artists for any particular performance (some roles are double-cast, with The Prince running to a choice of three dancers) one had to seek a piece of paper pasted up on the wall when entering the auditorium; the conductor though was less successful in being identified (but, from a choice of three, I am pretty sure it was Brett Morris). The playing of the band is very good, with some excellent solos (not least from leader Abigail Young and trumpeter Dan Newell); it says something for the quality of these pick-up players that the principal horn is Stephen Sterling. It was also instructive to hear tempos for individual numbers that were sometime convincingly slower or faster than in non-danced concert performances or recordings of this unfailingly inventive music.

However, there are some brickbats, one being why Tchaikovsky’s brilliant orchestration of this great musical canvas needs to be “revised”, Rowland Lee taking the credit for such amendments; yet, in fact, to anyone who knows the work, there isn’t much that is different, save that the strings, only eleven in number from a total personnel of twenty-seven musicians, are very thin-sounding and, while decently played, lack the richness this music ideally needs. That a Sound Designer is acknowledged presumably explains why the harp was usually too loud and given a jumbo image in relation to the other instruments; pointless and irritating. (And the programme-book has within it the creation of a new instrument: “Corps (sic) Anglais”. That really is ‘taking’ as well as adding the p!)

Furthermore, on this particular evening, some in the audience left much to be desired in terms of behaviour; their eyes might have been engaged but so too were some mouths (a trio of people were laughing at anything and everything, pantomime-style, and then talking loud enough for their intrusions to travel several rows of seats); and not forgetting those who noisily opened packets of crisps when the music is at its quietest or most touching: hunger-pangs may have been satisfied, but ears, finer sensibilities, and respect for others, were non-existent.

However, let’s bring some Christmas and New Year cheer, for one can happily recall the enthusiasm, perfection and tangible emotions that these very talented dancers displayed, as well as the colourful designs, and it is not difficult to appreciate why Mathew Bourne’s Swan Lake is so renowned and enduring.