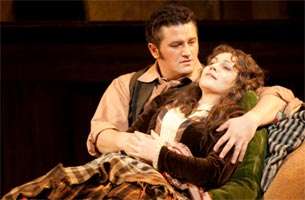 It may be a stretch to say that John Copley’s venerable production of “La bohème” looks as fresh on this, its twenty-third revival, as it did at its first run 35 years ago, but it is almost impossible to envisage a more entrancing staging in the traditional mould.

Bursting with detail (often more than can possibly be absorbed in a single performance) and barely looking their age, Julia Trevelyan Oman’s lavish sets are close to ideal in evoking a sepia-tinged bygone era of 1830s Paris. The bohemians’ garret, on split levels and full of interesting haphazard corners, manages to be both spacious enough for the men to lark about but also believably cramped and drafty. Deft lighting helps create the illusion of a top-floor room – and also draws attention-in for intimate moments.

The tour de force is the hyperactive Act Two scene, combining a rose-tinted picture-postcard street-scene festooned with bustling chorus, with the interior of Café Momus – complete with kitchen and a pool table on an upper level. Almost as wonderful is the magical gentle snowfall throughout much Act Three’s shivering mid-winter exterior.

The current run is double- (sometimes triple-) cast; for this opening night we were, unusually, able to compare two accounts of Rodolfo. Piotr Beczala of the first cast, we were told before Act One, had been suffering from a cold and, despite a valiant effort and some beautifully fluent moments, it was clear that his voice was not in the best of shape. But luckily Teodor Ilincai (scheduled for two later performances) was in the house and able to make his Royal Opera debut earlier than he was expecting, stepping into the role for Acts Three & Four when Beczala decided he could not continue. Ilincai didn’t have quite the charm or vocal grace of the more personable Beczala, but he gave a thoroughly assured and engaging performance. 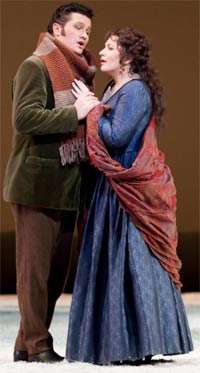 Both tenors had excellent rapport with Hibla Gerzmava’s Mimì. Sumptuously sung, Gerzmava’s portrayal was sensitive and well-rounded – timid yet warm and attractive in her first scene with Rodolfo, intimate rather than melodramatic in her final death-bed moments. Inna Dukach’s delightful Musetta (another house debut) also made a big impression.

Rodolfo’s fellow bohemians, lead by Gabriele Viviani’s solid Marcello, were all superbly played. There was a genuine sense of camaraderie between them, ensuring that their banter and silly antics felt spontaneous and endearingly fun rather than awkward.

Of the supporting cast, the excellent Jeremy White deserves a mention for his superbly observed and well-timed cameo as the landlord. Donald Maxwell also made the most of Musetta’s doddery admirer Alcindoro, but was inevitably upstaged by Dukach’s attention-grabbing performance.

Making his Royal Opera debut, Andris Nelsons showed exactly why he has been such a hit with the City of Birmingham Symphony Orchestra (where he is now Music Director). Treating Puccini’s score with due seriousness, Nelsons’s account was sparkling, full-blooded and tender. Occasionally his tendency to linger in the big romantic moments resulted in slightly messy ensemble, but his passion was always evident.

There is no reason why – with casts this strong – why John Copley’s “La bohème” shouldn’t still be entertaining audiences in another 35 years’ time.