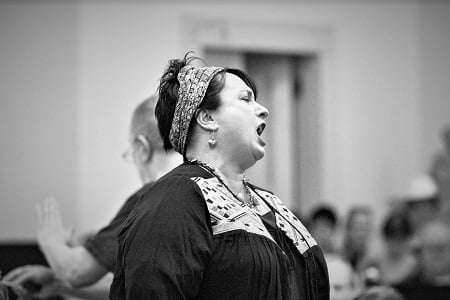 Ponchielli’s La Gioconda is very much of its time and genre – a grand Romantic opera conceived on an elaborate scale with a complex plot, requiring considerable vocal, choral, orchestral, and theatrical resources. It is a project not undertaken lightly and an almost inevitable need for compromise puts one in mind of Dr Johnson’s comment on a woman’s preaching: “it is not done well; but you are surprised to find it done at all.”

Midsummer Opera made a bold attempt to mount it in a semi-staged form, and the main impediment to its success is not really any inherent musical or dramatic qualities but the venue itself, which posed distinct disadvantages as well as some advantages. As a large, open, hall-like church without any formal structural divisions such as aisles, transepts or choir, but only the organ gallery at the back, St John’s Waterloo comprises a booming acoustic which tends to efface any attempt to sculpt nuance and subtlety – even in an epic like this opera. The Orchestra of Midsummer Opera was more than capable of filling it, as were the singers, but the latter were rather swamped in louder passages, and instrumental detail was lost except in quieter sparsely-scored moments which then sounded distant in any case.

La Gioconda exploits the spatial possibilities of a theatre, though David Roblou and Lynne McAdam could have made more explicit use of that in at least the final scene of Act One by placing the choir up in the organ loft (as was done in other scenes) rather than merely underneath it, to make these singers seem more ethereally distant – they are meant to be singing from inside a Venetian church. But at any rate, the use of St John’s pipe organ was beneficial in providing an appropriately dramatic and solemn accompaniment in that scene – too often the sound of theatre organs is merely contrived or kitsch. 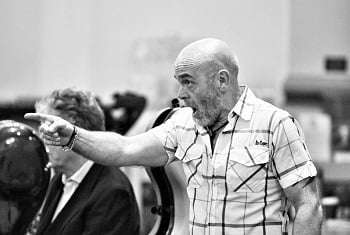 McAdam’s production used the space effectively by having the singers come and go down the middle of the audience, though with only minimal acting and miming. With everyday dress for the first two Acts, the chorus might have been at any rowing regatta rather than the formal ritual of the Most Serene Republic, but with evening-dress for the entertainments at the Ca’ d’Oro later on there was more of a semblance of old-world elegance. It was a pity, though, that even if there were no dancers, nothing could be thought of to accompany the ‘Dance of the Hours’, rather than simply have most of the cast and choir stood to attention awaiting the next scene. Also, despite a detailed synopsis in the programme, that only partially made up for the lack of surtitles – with a pulpit on both sides of the nave it would have been possible to put screens in them for that purpose, as they were near enough to the stage action not to divert the audience’s attention.

With a central cast of six characters – requiring each of the major voice types – the opera makes a serious demand on producers; within the context of their respective capacities, the soloists were well chosen. Zoë South and Siân Woodling as La Gioconda and her mother La Cieca were musical birds of a feather: they both have large voices which just about carried over the orchestra, partly by means of their wide vibrato cutting through the texture, though in this acoustic that singing often also sounded squally. South demonstrated commendable versatility and stamina with notable dramatic depth later on.

Both Anna Loveday and Stephen Holloway gave a steady and solid account of Alvise and Laura respectively – the married pair between whom Barnaba stirs up trouble by drawing attention to the presence of Enzo in Venice, a one-time passion of Laura’s. As that troublemaker, Trevor Alexander’s singing was not always securely placed and somewhat vague of tone, but he captured the part’s sinister, scheming characteristics convincingly. Although John Upperton came under some strain in the heroic tenor part of Enzo (once taken by Caruso) there was still a lyrical but powerful dimension to his portrayal.

Roblou directed the more or less full-size orchestra in a fairly broad account, which brought out impressively its passionate and emotional sequences, at times with Berliozian grandeur, as much as an Italianate one. This meant, however, that transitions between sections were not as fluid as they might have been and tension sagged. Except in the less densely scored passages, where the orchestra seemed sometimes unsure – such as the brooding opening to the Overture – the ensemble otherwise conveyed great confidence and enjoyment in the music, not least in ‘Dance of the Hours’, even if it was not always accurate. But it was the musicians’ engagement with the score that came over most of all, making for an effective discourse with the singers as well as the chorus that sang with similar gusto.

Praise to Midsummer Opera then for its enthusiastic taking up of an challenge which opera houses – outside of Italy, certainly – have tended to eschew, not least in London which seems not to have witnessed a staged performance since the 1960s. Ponchielli’s music responds as astutely to the dramatic range of the narrative as Verdi’s does, so this was a welcome opportunity to assess that.