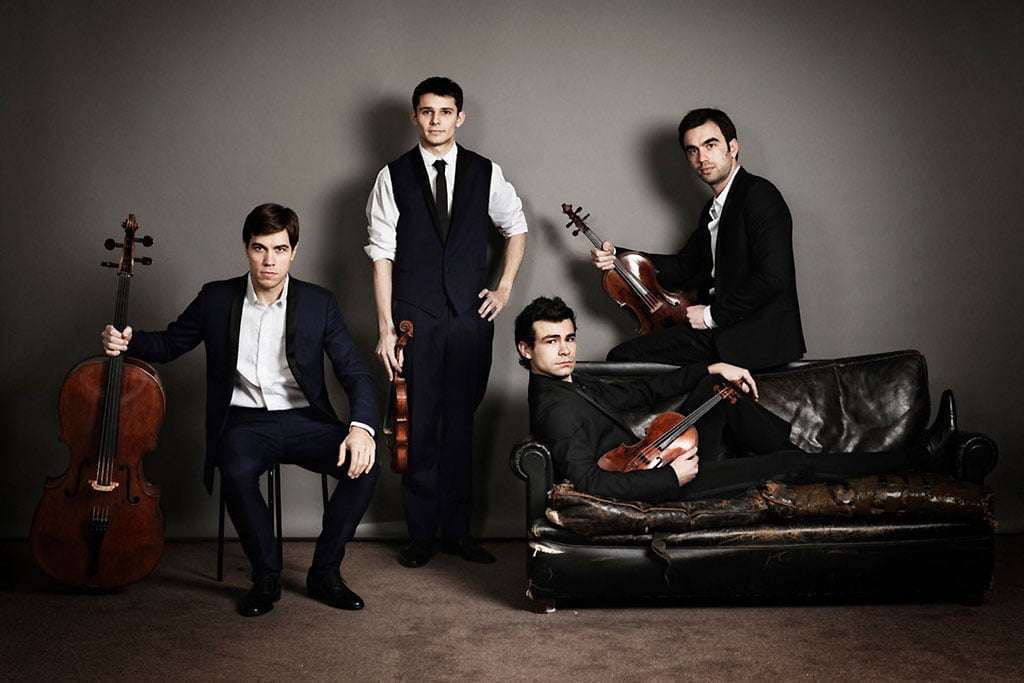 Robert Schumann’s chamber music is every bit as wonderful as his Symphonies and piano music. All the present pieces were written in 1842, as were the other two String Quartets that comprise his Opus 41, and all composed in the second half of that year: a fund of inimitable quality in such a short space of creativity.

The A-major String Quartet, managing to be both expansive and classically concise, opens plaintively, with graciousness carrying the music forward, winsomely so, if with some Beethoven-like wake-up calls; quite lovely music, played with sympathy and distinctive burnished timbre by the seasoned Modigliani Quartet, formed in 2003. Today its members are still-young men with a real sense of style and democracy, as the exchanges of the first movement demonstrated, so too the changeable nature of the second. The initially sangfroid Adagio was a perfect arc, rising in intensity before returning to intimacy. By contrast the rhythmic impetus of the Finale was vividly sculpted.

Building on her outstanding first recording for Warner Classics (review-link below) of grand Russian Piano Concertos, Beatrice Rana proved to be a discriminating chamber-music collaborator, even more so when the lid of the piano was set on the highest stick. With Loic Rio, Laurent Marfaing (an exceptional viola-player, with a magnificent sound) and François Kieffer, the cellist placed centrally, Schumann’s Piano Quartet was given as the impressive work it is – from its solemn, Beethovenian introduction (included as part of the exposition, during which various tensions are established and therefore the repeat is essential to appreciate the composer’s innovation, so what a shame it wasn’t taken) to the optimistic conclusion. With Rana ever-watchful and always integrated with and supportive of her colleagues such movements as the scurrying Scherzo delighted the ear in its lightness and the sublime slow movement really touched the heart. As for the resolute Finale, sustained by a motif that keeps nagging the listener well after the performance, these musicians also found the lyrical and poetic aspects of this outgoing conclusion.

With Philippe Bernhard now returned to leading, the concert closed with Schumann’s superb Piano Quintet. The first movement was spacious enough to fully integrate the contemplative second subject – and we got the repeat – and with the slow march that follows (melancholic, reminiscing) something spellbinding was reached. The round-and-round Scherzo sparkled, a Spirograph of patterns, the second Trio especially fleet-footed, and the Finale was a jubilant homecoming, Schumann’s counterpoint made impassioned, Marfaing’s viola breaking through the five-way conversation, four guys out front and Beatrice Rana finding a means of connecting with them while illuminating her part.