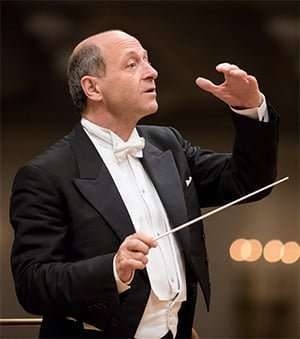 The ever-inventive Iván Fischer has conceived and brought to Lincoln Center’s Mostly Mozart Festival a clever production of Mozart’s Le nozze di Figaro, performed by his Budapest Festival Orchestra and an outstanding international cast in what he calls a “staged concert” – more than a concert version, yet less elaborate than a full-scale staging. Fischer’s production design focuses on how costume – and changes of costume – affect the way people behave and perceive one another. As the audience arrives, several costumes are suspended high above the Rose Theater’s bare stage, to be lowered later at appropriate points in the opera’s plot. During the Overture, members of the chorus, initially dressed similarly to the orchestral players, change into the costumes of household servants in full view of the audience, and also dress the set for the initial Act, filling two garment racks with dresses representing the Countess’s wardrobe.

The action takes place on a central raised platform surrounded by the orchestra and on two small lower platforms that are located just behind the violins on either side of the stage and lead to doors through which characters enter and exit. Early in Act One, as Figaro sings ‘Se vuol ballare’, a mannequin costumed as Count Almaviva descends to one of the side platforms, allowing the valet to apostrophize his absent employer – and ultimately to remove the figure’s head and costume, leaving behind a torso wearing only boxer shorts. Cherubino changes twice into costumes that are lowered to the stage, first an army uniform during Figaro’s ‘Non più andrai’ in Act One, and later a maid’s dress in the Countess’s boudoir in Act Two. That same dress and a gold-colored formal gown figure prominently in the final Act, when the Countess and Susanna exchange identities in order to entrap the Count. By then, the chorus had returned to modern dress and the principals did likewise just in time to strike a pose facing away from the audience as the stage was blacked out at the opera’s final strains. 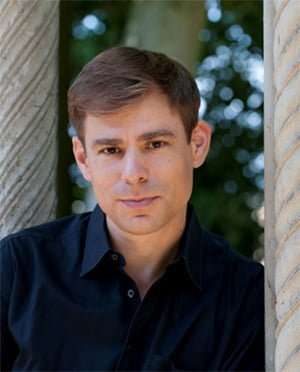 Hanno Müller-Brachmann and Laura Tatulescu brought fine singing, winning personalities and sexual chemistry to the central roles of Figaro and Susanna. Müller-Brachmann’s Act One cavatina and aria were excellently sung, as was his ‘Aprite un po’ quegl’occhi’ in Act Four. His crystal-clear bass contrasted nicely with the baritone of Roman Trekel’s Count as the two confronted each other throughout the opera. Tatulescu made outstanding contributions in her many ensemble numbers, and gave a lovely account of her only aria, ‘Deh vieni, non tardar’.

Miah Persson was a lovely and charming Countess, playful with Susanna and Cherubino, combative with her philandering husband, yet able to maintain her air of nobility and ultimately pardon the Count. Her arias ‘Porgi, amor’ and ‘Dove sono’ were among the evening’s highlights. Count Almaviva is the villain of the piece, but even in Trekel’s forcefully sung Act Three aria ‘Vedrò mentre io sospiro’ he seemed not so much evil as egocentric and frustrated by the repeated failures of all of his schemes.

Making her New York debut in the trouser-role of the randy page Cherubino, mezzo-soprano Rachel Frenkel was superb, both vocally and in her comic timing. She described Cherubino’s infatuation with the Countess in a breathless ‘Non so più’ in Act One and sweetly serenaded her with ‘Voi, che sapete’ in Act Two. Her portrayal drew repeated laughs from the audience as the young page made his timely and untimely appearances and disappearances.

As Bartolo and Marcellina respectively, Andrew Shore and Ann Murray were convincing as Figaro’s adversaries – he in a forcefully-delivered aria (‘La vendetta’) and she in a catty duet with Susanna – and then quite humorous when they discover that Figaro is their long-lost son. The remainder of the cast was also excellent. Rodolphe Briand ably portrayed both the snooping Don Basilio and later the judge, Don Curzio. Norma Nahoun showed off a fine soprano voice as Barbarina, and Matteo Peirone was vocally solid and wildly amusing as the beleaguered gardener, Antonio.

Fischer drew outstanding playing from the BFO, maintaining a fairly relaxed pace that allowed the singers to shine. In order to avoid interrupting the flow of the already convoluted plot, Fischer cut Marcellina’s and Don Basilio’s Act Four arias – a wise decision even though both Murray and Briand excelled in their respective roles. Fischer’s innovative conception and the fine singing and playing made this performance an unqualified success.