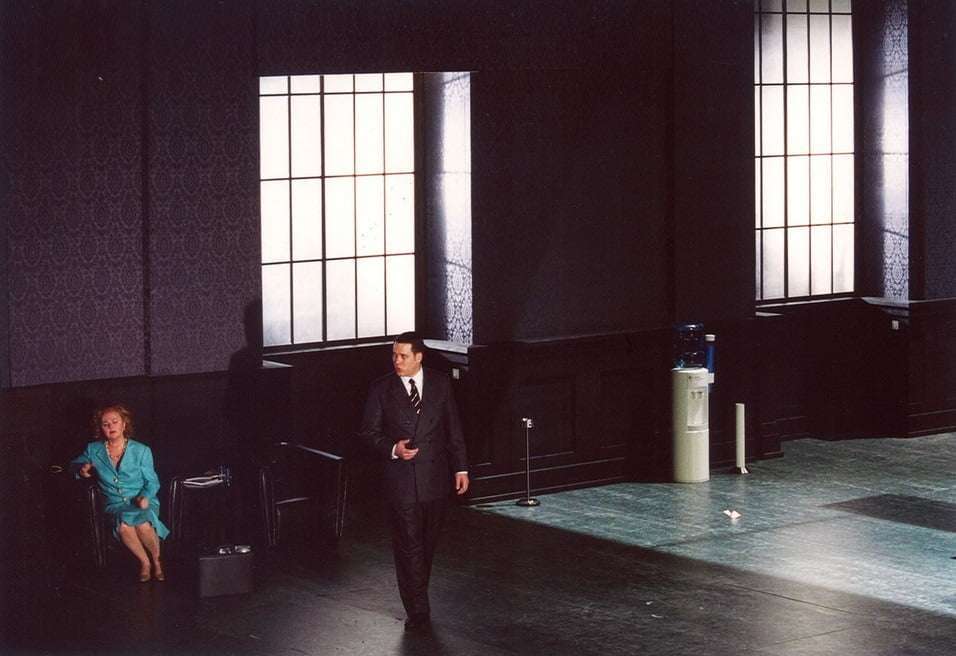 At an age when most opera singers have hung up their wigs and costumes Edita Gruberová keeps on going, cleverly limiting her appearances, and casting herself usually in one of the great bel canto works as diva assoluta. Hers has been a superb career, from the show-stopping Queens of the Night and Zerbinettas to more serious fare, and so it was again in a revival of Donizetti’s fascinating Roberto Devereux at the 2015 Munich Opera Festival, where Gruberová is revered and attains divine status.

The voice is not, and indeed could not be, what it once was, but what is here is absolute command of the stage from her first entrance to her collapse at the final bars. What she also does is underplay the diva histrionics, providing a detailed and, ultimately, heart-breaking portrayal of an ageing monarch who abdicates her throne (Donizetti and Cammarano play fast and loose with history). It is in the final scene, when she hears the cannon shot that announces the execution of her ex-lover Essex, that Gruberová stamps herself on this role: she starts the slow aria with hollow, almost trance-like tone and exposes the inner anguish of Elizabeth. In the second verse, she slowly removes her ginger wig to reveal the wispy hair of an old woman. It is magnificent as theatre and mesmerising vocally, as the imperfections of the artist’s voice mirror precisely the declining powers of the queen. Earlier, some of the coloratura had been less than precise, and the scooping and sliding that Gruberová has always been known for was much in evidence, but none of that mattered in the end – this was a true artist delivering a performance which transcended any technical quibbles. 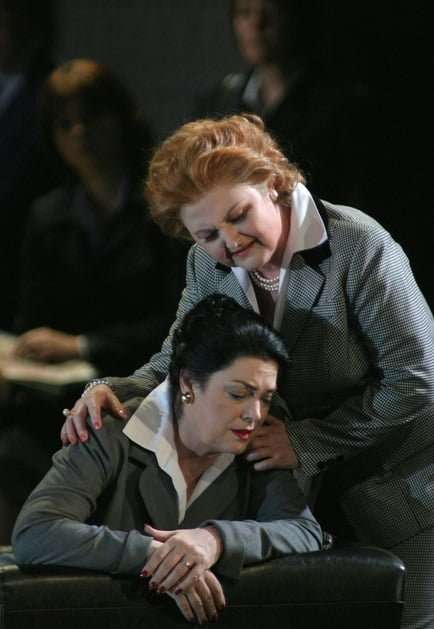 The opera is a heart-rending exploration of lost love for all four main protagonists, so good that it was not Gruberová alone who impressed. Alexey Dolgov was an impetuous Essex who managed a magnificent rendition of his prison aria, despite the infelicities of the production; the voice is open and healthy, even if it lacks the last notch of Italianate ping, and he phrased with intelligence. Sonia Ganassi was a tortured Sara, Duchess of Nottingham (it was Jeanne Piland in earlier performances, as in the second photo), whose reciprocated love for Essex makes the queen her rival. She too is a stylish Donizetti singer and her Act Three scene with her husband was a highlight, especially with Franco Vassallo in a state of grace. He possesses a large, expressive voice which he pours out in long lines of velvety, nut-brown tone: he distinguished himself greatly. He and Ganassi, both Italian, also made something of the words, the emotion fizzing from them in a way which eluded Siberian-born Dolgov and, to some extent, Gruberová herself.

Alas, the orchestra was not as impressive as it had been the previous evening in Die schweigsame Frau. It was down to Friedrich Haider’s foursquare conducting which, physically demonstrative as it was, showed that he does not feel the music enough to make it sing. Welsh National Opera’s production of this work in 2013 did not have Munich’s stellar line-up but it did have Daniele Rustioni’s musical interpretation – would that Bavaria had heard that rendition. 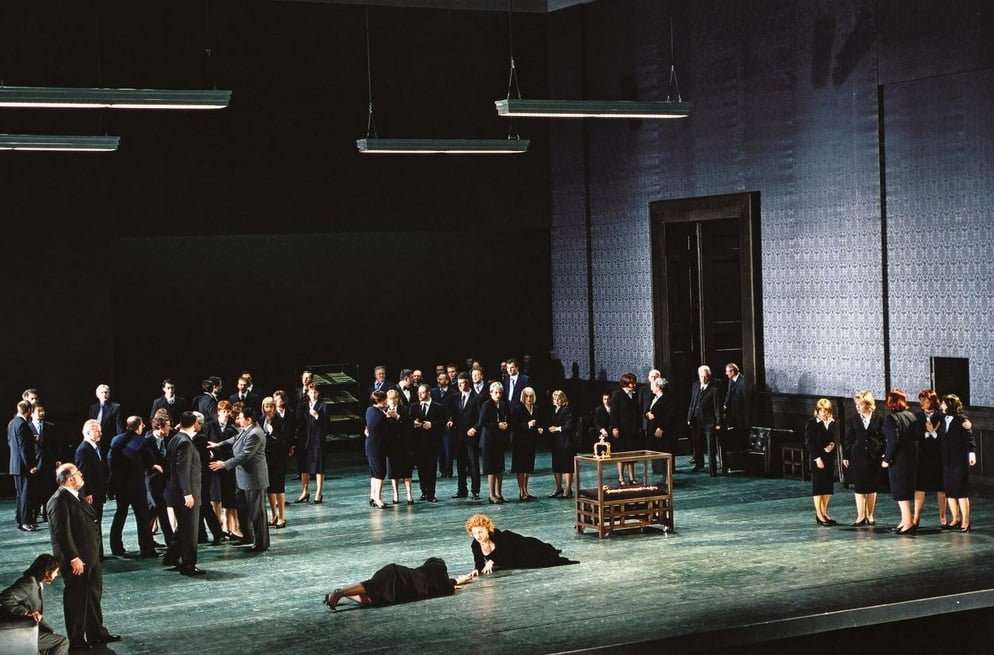 Haider’s sub fusc conducting mirrored Christof Loy’s dull production, which was set to all intents and purposes in a Gatwick hotel lobby. Everything was grey or black or dark blue, the courtiers at Elizabeth’s court in business suits (when will someone have the courage to get away from that particular sartorial trope?). The only set change was the intrusion of a perspex screen to indicate locations not at court. Very dull. Elizabeth is dressed and made-up to look like Margaret Thatcher (would a British director have chosen Angela Merkel?), which brings precisely nothing to the story and sheds not one watt of light on this intriguing and unusual opera. Most of the time the direction and production are a sombre and uninteresting backdrop to the protagonists but there are moments when they intrude and are plain wrong: in Act III Lord Cecil and Walter Raleigh beat up the Earl of Essex and give him cigarette burns – very Quentin Tarantino.

Poor Essex must sing his wonderful aria ‘Come un spirito angelico’ and cabaletta ‘Bagnato è il sen di lacrime’ blindfolded, and then de-bagged by Cecil’s henchmen – that Dolgov preserved some dignity in a wife-beater vest and boxer trunks says a lot about him. Ah well, Munich has long been in the vice-like grip of directors ‘Who Know Best’, something that London is becoming subjected to; lesser singers cannot rise above such inanities – in Munich at least they were of sufficient stature to do so, not least Gruberová who, against the odds perhaps, gave a vintage performance.