In the words of the song, “Is that all there is?”. This rag-bag of assorted little pieces claims to be an evening of “pure dance”; it reminds one of those ‘evenings of dance’ performed in a village hall or school gymnasium and assembled to bring the art of ballet to places which would never see a company. But there is here a world of difference: firstly, those evenings usually comprise highlights of the repertoire, secondly this selection is presented by the Sadler’s Wells, the country’s self-anointed dance house, and thirdly it features such big names as Natalia Osipova (whose concept this all is) and David Hallberg. This disjunct between the promise of the list of collaborators (Alexei Ratmansky, Kim Brandstrup, among others) and the plodding reality could not be more marked. 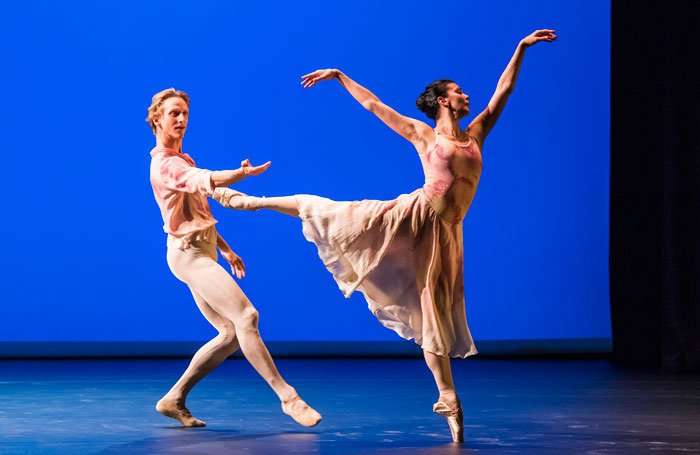 Let it be said that this is a leisurely evening, lasting just short of two hours yet featuring fifty-nine minutes of dance. With one twenty-minute interval, the rest of the time is taken up by interminable pauses as floors, costumes and lighting are changed. The result is fatal to the theatrical experience, the audience losing concentration and turning to chatter (which even curtain-up failed to quell) and mobile phones (which it equally failed to extinguish). That would have been just about acceptable if what was seen when the dancing started had been worth it. Osipova, not content with grazing the classical and neoclassical repertoire, now seeks new pastures, so what we witness is her ‘exploring herself’ as a dancer in unrelated gobbets of dance.

The programme opens with low-key a pas de deux from the gloopy, soupy The Leaves are Fading, a late work by Antony Tudor. As a whole ballet, it hardly quickens the pulse, but as an excerpt, it is deeply unsatisfying, a bleeding chunk of dance ripped from its context. It did, however, serve to showcase Hallberg, who, thankfully restored to the stage after a long recovery from injury, dances with class and a wholly satisfying musicality, even if the music here as throughout the show is recorded. Osipova moves quickly enough but she is not a lyrical dancer, the soft pliancy missing from her nonetheless impressive dancing.

Hallberg partnered her again in a new duet from globe-trotter choreographer Alexei Ratmansky set to Sibelius’s Valse triste. This being Ratmansky, it is a fluent pas de deux, the product of a serious and talented creator, but suffers from being somewhat over-baked, as if both choreographer and dancers were trying just a little too hard.

Best of all, Hallberg in In Absentia, a solo to J. S. Bach’s for-violin ‘Chaconne’ (from BWV1004) from the cerebral dance-maker Kim Brandstrup. Simple, direct and seemingly spontaneous, the dance, which features twists and bends, appears to emerge from his body, Bach’s ever-startling music eliciting pure dance. At least this short work lived up to the evening’s billing.Iván Perez supplied a boisterous duet for Osipova and Jonathan Goddard which came and went to Nico Muhly’s initially entertaining but later irritating composition Mothertongue. Osipova clearly likes to experiment, to push her own stylistic boundaries, but her ballet-trained body makes her an uneasy partner for Goddard, Rambert contemporary to his core. Six Years Later is, at fifteen minutes, overlong, lurching from slow-mo movement to ambient sound and in near shadow to more vigorous stuff set to a bastardised ‘Moonlight’ Sonata and then a pop song which cuts out in mid-flow to herald the curtain. Capping it all Ave Maria a final solo, our Miss O clad in white, the stage crisscrossed with powerful spotlight beams. Choreographer Yuka Oishi has chosen Schubert’s Ave Maria, but blithely states that her solo has “nothing to do with religion”, an ignorant and nonsensical standpoint which reduces music to mere background. Oishi has a strange approach to choreography; perhaps it is best termed ‘fusion dance’ lurching from Martha Graham to full-blown ballet pirouettes and grands jetés, all suffused with a mounting anguish which makes it a very hard dance pill to swallow.

In its continuing quest to find a replacement for the retired Sylvie Guillem, Sadler’s Wells has chosen Natalia Osipova. She is dancer with a global standing and there is no denying her hunger for more experiences. But this is perhaps not the best showcase for her – highlighting her versatility in a range of styles (doing is not the same as succeeding) is perhaps not how to focus on her undeniable artistry.