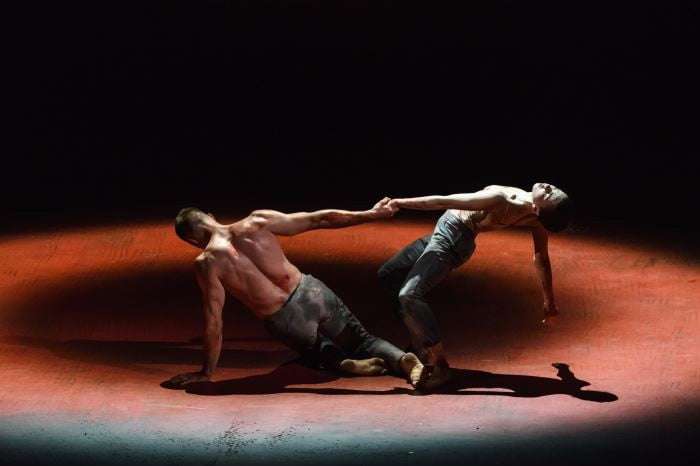 The retirement from the stage of Sylvie Guillem left Sadler’s Wells lacking a contemporary dance star whose shows could be exported (lucratively) around the world. The choice has been Natalia Osipova, late of the Bolshoi and Mikhailovsky Ballets and Amercian Ballet Theatre, currently residing as a company Principal at The Royal Ballet; the timing has been fortuitous, too, given that she has been anxious to explore contemporary dance, despite being only 29 with, presumably, her best years as a classical dancer ahead. Lustre, or at least excitement, was added by the inclusion in this programme of her erstwhile off-stage partner Sergei Polunin, dubbed “the bad boy of ballet”, but in reality a classical dancer of prodigious talent.

Certainly, Sadler’s Wells intended to make a splash with this first Osipova show, commissioning three new works for her from three dance-makers of stature. The result is to be welcomed, even if it highlighted the star dancer’s limitations as well as her many strengths.

The strongest work is Sidi Larbi Cherkaoui’s arresting Qutb (arabic for axis or pivot), a dense exploration of interdependence between Osipova and two highly talented contemporary dancers, Jason Kittelberger and James O’Hara. Fabiana Piccioli’s magnificent lighting places the three in the limbo of space, planetary eclipse depicted in light at the back, the dancers like celestial bodies, orbiting, colliding, interacting around, into and with each other. The opening sequence in which the three seem to split from a single bodily orb is spectacular, edge-of-the-seat viewing, as the three move and morph, Cherkaoui making full use of Kittelberger’s powerful frame, at times to support and lift both the others. 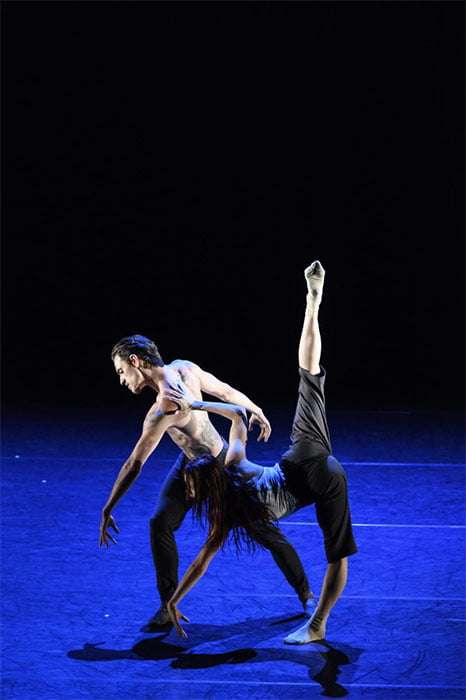 The two men are strong, expressive, but Osipova displays a degree of reticence, her ballet-trained body unable to achieve the seamless fluidity and infinite flexibility that characterise contemporary movement. It is hard, indeed, to see what she brings of herself to the work, what makes her movements intrinsically her, in the way that Guillem always achieved. Rather, Qutb shows that in terms of this style and form of dance, it is not possible simply to enter its world and to succeed; time and time again, her ballet quality pokes through the surface of her new vocabulary, like single words in otherwise faultless pronunciation which betray a non-native speaker; for Osipova, leaps are not mere leaps but always ballet jetés.

Silent Echo, Russell Maliphant’s new work, has a clever premise: to reinterpret the structure of the classical pas de deux (Osipova and Polunin’s natural idiom) in contemporary fashion. The traditional sequence (duet, solo, solo, duet coda) defines its structure, but the result is uneven. Michael Hull’s light-on-light-off first section with each dancer performing slices of movement at different locations is a good opener, accompanied to Scanner’s rhythmic beat, but Osipova’s solo does little for her, except highlight her ability to spin across the stage at high speed. Likewise, the closing duet seems a little perfunctory, the dancers unable to establish the vital chemistry between them which is the life-blood of pas de deux.

Most successful is Polunin’s solo, clearly tailor-made for him, a perfect choreographic fit. It takes the virtuoso leaps, spins and tricks of male dancing in pas de deux and corrupts them, bringing inner torment, fatigue, and even anguish, through surprising juxtapositions of classical step, modernist angularity and human frailty. Polunin’s supreme classical line and innate princely bearing blaze forth – he is perhaps one of the most divinely gifted classical dancers in living memory – and to see him execute every step in this solo is to glimpse what he has chosen not to share with opera house ballet audiences.

After playing second fiddle in the first two works, Osipova was the undoubted star of the last, Arthur Pita’s strange Run Mary Run. Pita is a man of the theatre, even if his choreography per se may not be top drawer; so we had drama with both dancers emerging from a pile of earth which we understand to be a grave, and the life of their dysfunctional relationship played backwards. Inspired by Amy Winehouse and her one-time husband Blake Felder-Civil, and set to the music of the Shangri-Las and Frank Moon, Pita tells the story of a James Dean-type hard-guy and a Sixties girl, bringing his drug addiction to the fore. 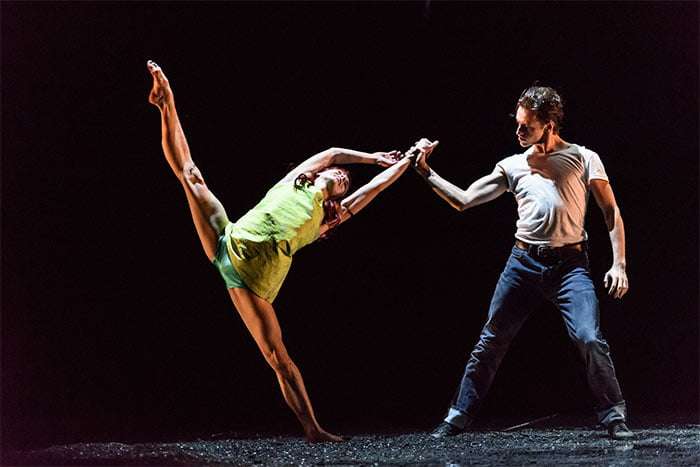 Osipova, who, as a natural demi-caractère dancer, relishes a narrative, was superb in her Winehouse-like character, looking fabulous in an acid green mini-dress and heels. Crucially, distress and upset at her partner’s drug taking, period hip-gyrating sexuality, girlish giggles at being the centre of this man’s attention are all meat to her artistry, and she created a three-dimensional figure whose life story we wished to follow. Polunin, however, seemed out of sorts, visibly uncomfortable with period social dance moves, curiously unsexy in his white t-shirt and blue jeans braggadocio. His face is often blank and he shows his limitations as an actor, unable to create anything beyond a cardboard persona; crucially in Pita’s work, which is always full of wit, he does not possess comic timing, with visual and physical gags falling flat. When unleashed on pure movement, as in a brief angry solo, kicking the earth around the stage, he was predictably superb.

If Osipova will replace Guillem as the chou-chou of the Wells remains to be seen. In contemporary dance terms she is very much a ‘work in progress’; her motivation for exploring the world of contemporary movement is laudable but, on the evidence of this programme, it is not, and, one suspects can never be, her natural métier.