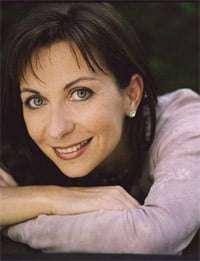 Natalie Dessay is a current example of that exotic species, the coloratura soprano. Up until the 1950s these were usually small-voiced songbirds of a rather shallow interpretative nature. Then the Callas bombshell exploded, and in the 1960s and 1970s the great Joan Sutherland dominated the repertoire with her dazzling technical command and big voice. Since then several artists have come and gone without making any enduring impression.

Dessay has a medium sized, flexible voice, which does have some weaknesses, but in this concert her main problem was the period-instrument band behind her and a conductor who clearly had absolutely no understanding of the repertoire on offer.

The programme was not as published. It opened with the overture to Donizetti’s “Roberto Deveraux” in a flabby performance devoid of rhythmic vitality, limpid phrasing and, when needed, sheer vulgarity. The nearest we got to excitement was when the timpanist scrambled to find the right page in the score. Evelino Pidò was rather fond of jabbing arm movements, which had little audible affect.

Dessay entered to cheers before giving a rather nondescript performance of the “Maria Stuarda” cavatina. The voice itself is not large but does have projection; though as with most contemporary singers, she eschews portamento and variable vibrato, which robs her of two vital expressive tools. Thus every note was clean, legato only being allowed to surface for a few bars. Unfortunately the cavatina was devoid of its recitative, the opening lines lacked poetry, the cabaletta – minus chorus and mezzo-soprano – elicited little attack or excitement and the brass fanfares were sadly underpowered.

Bellini’s “I Puritani” contains one of those ‘Mad Scenes’ so beloved of bel canto composers. To perform it as part of a concert requires cuts to be made, and the deletion of Giorgio and Ricardo’s horrified interventions, as well as the trio and choral passages, and robbed the scene of much of its power. In this performance Dessay conveyed neither desperation nor madness. The sheer vocal glory of Sutherland and the terrifying intensity of Callas were nowhere to be heard. There was, however, some beautiful dynamic shading and hints that in the opera house Dessay might make more of an impact.

After the interval we had Cherubini’s Symphony in D and 30 minutes of note-spinning which received a similarly uninspired performance. There was no tension, rhythmic vitality or elegance of phrasing and the intonation and ensemble were approximate at best.

Which brought us, to what was, by some distance, the highlight of the evening – ‘Caro nome’. The opening was disappointing. Once again Dessay’s every note was exactly in place, but the effect was staccato-like. However as the aria progressed, Dessay relaxed and there was a sense of rapt intensity in the execution. She even used slight portamento and beautifully varied pianissimos, as well as holding on to notes and slowing down marginally in phrases to heighten the emotion. This was closer to what operatic singing should be. Technically, two of the trills were ill-defined, but the final one, as she walked slowly off was voiced for an eternity. Ravishing.

Then came the Prelude to Act One of “La traviata”, with 26 badly tuned ‘period’ string-instruments and inexpressive woodwind, after which Dessay returned to nondescript form for Violetta’s big Act One finale. There was no real emotion and the coloratura was nothing more than efficient.

There were two encores, the second being the cabaletta from the ‘Mad Scene’ in “Lucia di Lammermoor”, which while good was not special and without the final E flat.

Dessay iprides herself on being a singing actress; concert appearances inevitably diminish the impact she makes. But on the evidence of this recital, she has some way to go before she can claim a place in the pantheon of great coloratura sopranos.