In pre-Olympic fervour, London is awash with all things Chinese, but the week-long visit by the National Ballet of China must count as one of the most significant events of the summer. The Company is impressive and this performance of Swan Lake highlighted its many strengths – as well as some weaknesses it has to address if it is to make the leap from being a good national troupe to one of international standing.

The Company can trace its roots to the 1950s when several Russian (or, in reality, Soviet) ballet teachers came to China, ultimately leading to the formation of Central Ballet which served the communist regime well with such ‘on message’ works as the 1964 The Red Detachment of Women. The 1980s saw a gradual opening up to outside influences under the then and still present director Madame Zhao Ruheng who acquired works from creators such as Bournonville, Balanchine and MacMillan. 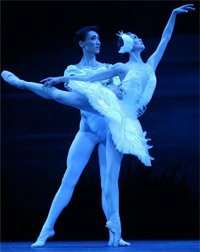 In his fine article in the Company’s London programme (and which was the source for the information above), Clement Crisp states his belief that China will become one of the crucibles for classical dance in the future. I cannot see that yet, certainly on the evidence of this Swan Lake, perhaps because I felt that the very essence and motivation for the work is something that as yet eludes the dancers. They are impressive technicians certainly, displaying an essentially Russian école de danse, but the emotion and the artistry are not yet consistently evident.

This Swan Lake is no Chinese take on the ballet (that would, perhaps, have been interesting); this is Natalia Makarova’s production, known to British audiences through its place in the repertoire of London Festival Ballet (now English National Ballet) from the late-1980s to the mid-1990s. Makarova has tinkered with that concept; indeed, the present version as performed by the Chinese is her 2005 re-think for Perm Ballet. 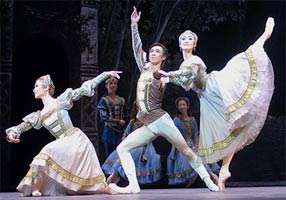 Significantly for London audiences, yet strangely un-emphasised, Makarova includes choreography by Frederick Ashton known to her from her guest appearances with The Royal Ballet in the 1970s. She has, unfortunately, dropped the ‘Pas de Quatre’ – a justly famous interpolation which contains first-rate choreography and which is now performed by The Royal Ballet only on tour – but has kept the ‘Pas de Douze’ (Act One Waltz) and Ashton’s deeply lyrical Act Four.

Apart from Ashton’s contributions, Makarova presents a very traditional version, including the Petipa ‘Pas de trois’ in Act One, much of Ivanov’s choreography and, apart from the ‘Neapolitan Dance’, the national dances we are used to in the Royal Ballet version. What she cannot resist though, is to simplify and to over-egg the ‘swan’ motifs, which means that the corps de ballet and soloists are constantly flapping their arms and delivering less exciting movement. 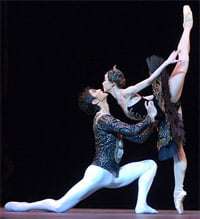 So, on to the performance. Let me say at the outset that the dancers are well-schooled, with good turnout and a fine sense of ensemble, the latter making the lakeside scenes particularly impressive. However, I felt that the strangeness of it all for the exclusively Chinese Company sat uneasily: they czárdás and waltz and curtsey with aplomb, but I am not sure they quite know why, except that it is in the choreography. The result was a very staid set of national dances, each lacking the distinctive tang of their specific provenance; though I cannot blame the dancers for not appreciating the difference between a Hungarian czárdás and a Polish mazurka. The Spanish and Neapolitan dances were oddly similar in movement quality.

The Ashton interpolations were competently executed, but barely in his style – Makarova’s acquisition staged by another in a country whose dancers have probably never heard of the English choreographer. No surprise then that there is little or no épaulement (the Chinese dancers seem very reluctant to bend their torsos), no focus on arms and wrists (hands appear not to receive the attention they need) and a leaden musicality (not helped by the lumpen conducting from Zhang Yi and a distinctly scratchy orchestral quality). The corps and soloists are well drilled, and the ensemble work, be it Ivanov or Ashton, well delivered, although I could not get the impression out of my head of dancers performing, rather than inhabiting, their choreography.

That distance from the essence of the work suffused the main roles too. Yes, they went through every gesture, Hao Bin as Siegfried padding the stage as any danseur noble (he has a fine classically proportioned body and a generous technique) and Zhu Yan rippling her arms to swan-like effect; but they seemed curiously detached from it all. Bin is an easy dancer, with a soft landing and an unforced quality to his movement, and I was impressed by his contemplative solo in Act Three, in which he displayed a clear line and neat footwork.

Yan’s Odette & Odile was rather more problematic: her Odile lacked the icy fire needed for this sparkling temptress and was insufficiently contrasted with her Odette, which lacked the final element of lyricism. Her Black Swan pas de deux did not go particularly well, and I certainly felt that she is no virtuoso – her fouettés included a mishap which came from overstretching herself – 32 well executed singles (pretty impressive in themselves) are better than fudged doubles. Her White Acts were far more successful, and she proved herself an adagio dancer of some ability, although there is a lack of rubato to her dancing, lending it a slightly foursquare quality rather than the impression of ebb and flow or breathing with the music.

A mixed bag then, with much to applaud. However, if the Company wishes to move up a notch from being proficient, clean and neat to becoming performers of conviction and emotional and interpretative powers, then there is much to do. Crisp may well be right and China may become a ballet powerhouse (mirroring its likely economic dominance in decades to come), but it is most certainly not there yet.