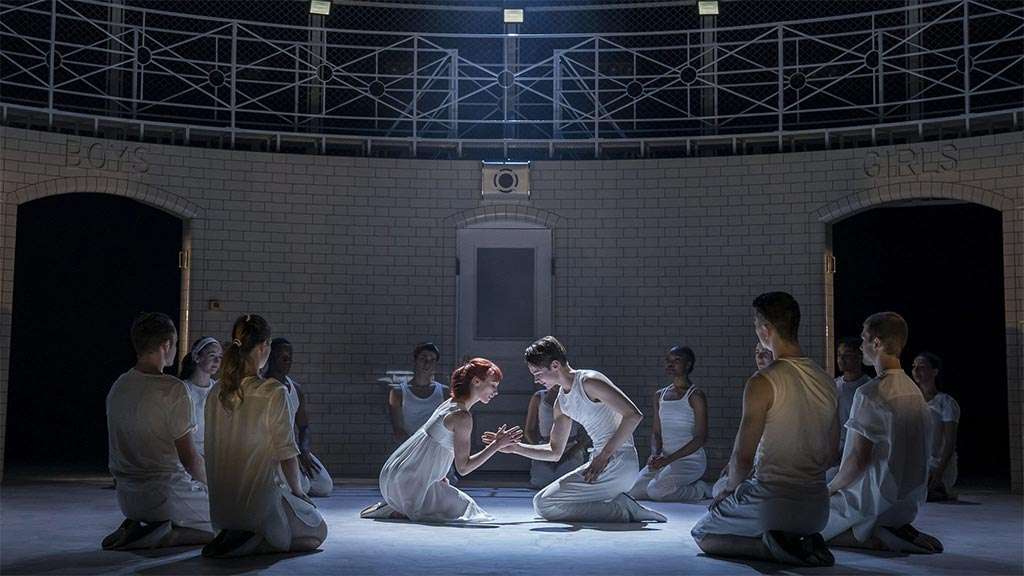 The Matthew Bourne machine rolls on with a new production filling the Sadler’s Wells Theatre every night for most of August. This time, Sir Matthew has turned his attention to Romeo and Juliet, that staple of the ballet world, but given it a particular slant – his cast is purposefully youthful, his own company members joined by very young trainee dancers (as young as 16) to create a tale of adolescent desire and anger. It is an approach which works for the most part, bringing an undeniable vitality to the stage, but which also means that subtleties and characterisation remain largely unexplored – this is broad brush-stroke dance-making.

In a poor decision for the whole enterprise, Sir Matthew has opted for a single set, thereby excluding his talent for scene change and setting, and while Paule Constable’s lighting does much to change mood and location, a sweep of narrative is missing. The setting is a form of youth correctional institution, the ‘Verona Institute’, surrounded by a wire fence and dominated by a curved, tiled wall with entrances marked ‘boys’ and ‘girls’. Costumes are generally simple – white trousers and tops which are shed with alarming regularity to reveal pants and bras; the only exception is the ‘dance social’ for the inmates for which they dress up in mixed period clothing, mostly from his beloved 1950s, but not exclusively so. There are echoes of that other Romeo and Juliet reworking, West Side Story as well as Grease – the general aesthetic is familiar. 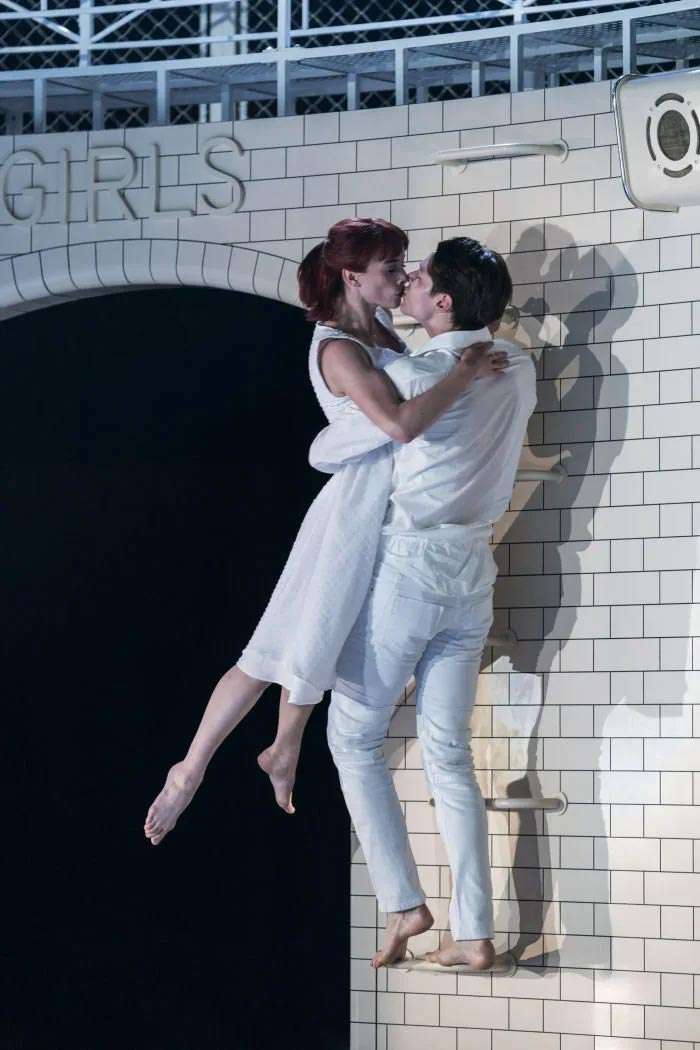 Anyone expecting the regular R and J will be disappointed. Terry Davies has filleted, re-ordered and re-scored Prokofiev’s composition for conductor Brett Morris and his 19 amplified musicians, making for a musically disconcerting experience, as familiar numbers follow each other in an unfamiliar sequence. Similarly, Bourne has picked and chosen from Shakespeare’s narrative, ejecting any elements which do not suit. Out go the poison and the feuding families and in come not only a new location but also new characters which include Balthazar, Mercutio’s boyfriend, as well as jokey re-brandings, such as the do-gooding chaplain, the Reverend Bernadette Laurence. Not that any of this is a bad thing in itself, but it is sad to report that the new narrative sags and does not in any way lead to the final tableau of two dead young lovers. Indeed, the whole element of tragedy, of inevitable destruction, is excised – Juliet accidentally stabs her Romeo in something of a psychotic episode – leading to an unfocussed, accidental quality to the storyline. Indeed, the very short second half after the single interval sees the narrative lose its way with an unsatisfying arbitrariness to events which makes for an unsatisfying ending to the show. For the most part, the narrative is inoffensive if not always effective, although the off-stage rape of Juliet by the guard Tybalt at the outset is both gratuitous and makes a nonsense of her subsequent innocent puppy love for Romeo shortly after.

New Adventures’s dancers certainly give their all to what are pretty simplistic characterisations and emphatic, if unsophisticated movements. They engage enthusiastically in their characters, even if these are generally mere sketches – the good are good, the bad, bad and the kooky, well, kooky. Only rarely does a moment of pathos and something deeper make itself felt, and Sir Matthew cannot resist milking certain moments – the drunken gun-waving by Tybalt goes on for an eternity, as does Balthazar’s grieving over the dead Mercutio. There are some choreographic highlights – Romeo’s solo on and around his bed is both clever and communicative of desire and loss, while his and Juliet’s Act Two floor-based duet is also most accomplished. However, he cannot generally resist the lure of choreographic jokery, so the lovers’ first encounter is characterised by an unbroken kiss which survives twists, turns and even going up a staircase. Very amusing, but hardly communicative of the thunderbolt of love which strikes the two youngsters. 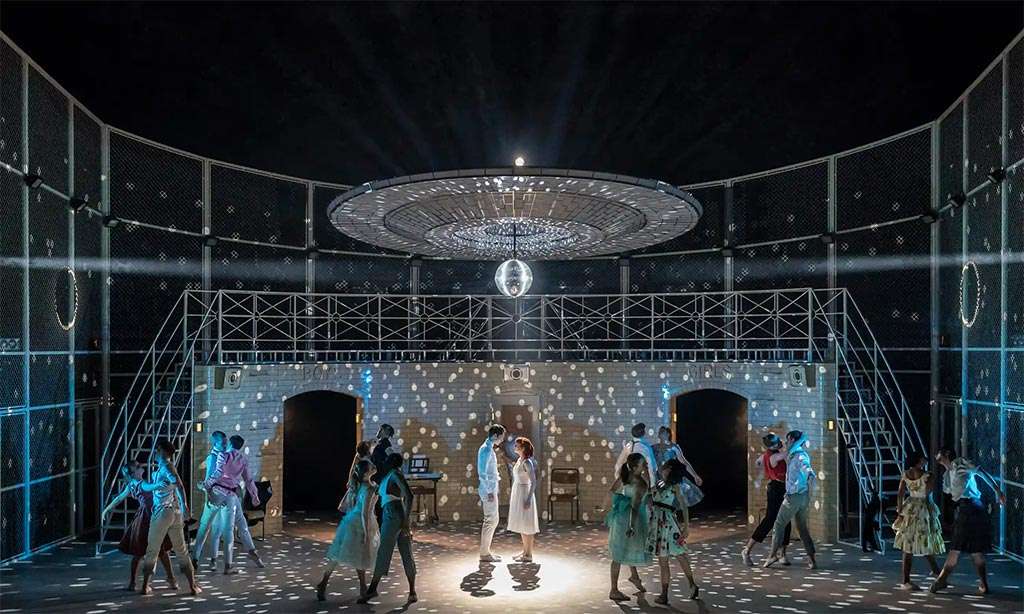 Cordelia Braithwaite is an experienced Bourne dancer, and delivers fully as Juliet, even if what she has to work with is generally limited to communicating despair or rapture. She possesses a free, open movement quality which complements that of Paris Fitzpatrick, her long-limbed, impossibly young-looking Romeo. Accomplished in movement as he is, he is a little more of a blank canvas in terms of character, especially when compared with Ben Brown’s firecracker Mercutio, who draws the eye at his every appearance; he is a strong performer, achieving the ideal combination of ability as both dancer and actor. Jackson Fisch as Balthazar reveals an impressive technique with finely hewn movement while company veteran Dan Wright’s Tybalt is highly accomplished in what remains a resolutely one-dimensional part, despite his best efforts. Special mention to Daisy May Kemp: simply delicious as the Mary Sunshine-like chaplain, joyously thumping away at her bontempi keyboard at the hop, blissfully unaware that all the kids want is to get each other’s kit off.

Matthew Bourne has created his own genre of dance-narrative, and secured a knighthood in the process. It is entirely merited, as he is the purveyor of genuine entertainment, has delighted so very many and become a much-loved fixture in the UK dance landscape. Romeo and Juliet is not one of his best works; for something decidedly more successful, we will have to wait for Christmastime and The Red Shoes.