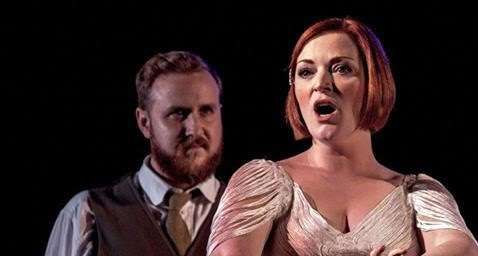 New Sussex Opera continues to set the pace in terms of unfamiliar operas, imaginatively staged, with this production (the first for decades) of The Travelling Companion being no exception. This last of Charles Villiers Stanford’s operas, completed in 1916 but only posthumously staged, typified the career of one whose early immersion in the genre should have enabled him to blaze a trail for modern British opera. That he failed to do so is usually attributed to his failings as a composer which, as NSO here demonstrated, may not be entirely the case. Taking its cue from a story by Hans Christian Andersen, and with a workable if often gauche libretto from Henry Newbolt, Stanford’s opera welds elements dealing with coming of age, divine intervention, chivalrous conduct and supernatural hokum into a surprisingly cohesive drama whose four Acts make for a well-balanced whole.

The main dramatic flaw is the overextended scene in the Wizard’s cave, though even here Stanford compensates with evocative music that may surprise those who know him only as a symphonist in the Brahmsian mould. This third Act also brings out the best in Paul Higgins’s direction, the stage-action galvanised with Tom Turner’s suitably lurid lighting and Roseanna Anderson’s dextrous choreography. Elsewhere this staging is notable mostly for its restraint, as in the church scene of Act One where Isabella Van Braeckel’s austere designs afford contrast with the garish village scene that follows.

That so resourceful and apposite a presentation is feasible given the limitations of Cadogan Hall’s stage says much for the expertise of this production team as a whole; vocally, too. David Horton has all the necessary fervency and naive fearlessness as John, as does Julien Van Mellaerts a strength and eloquence in the title-role – a ‘friend in need’ in time of crisis. Kate Valentine evinces ardour but also the requisite self-doubt as the Princess, complemented by the sombre bemusement of Pauls Putnins as the King, while Ian Beadle brings suavity to the role of the Wizard and Felix Kemp a ceremonial authority to that of the Herald – the latter two doubling effectively as ruffians in the first Act.

The NSO Chorus makes the most of its lively contributions (Stanford here betraying a debt to Sullivan), while Toby Purser secures a vigorous and always-attentive response from the NSO Orchestra – the occasional turgidities of Stanford’s writing rendered with warmth and not a little lightness of touch. Elements from Wagner, Verdi and even Puccini indicate not mere derivativeness, but rather underline Stanford’s sense of dramatic acuity that lack only the last degree of individuality as might well have assured his operas greater longevity.

An admirable production, then, of a work whose central themes of selflessness, empathy and compassion hardly seem to accord with the guarded and cynical persona of its composer as is understood. Maybe, in this largest project of his final years, Stanford was intent on redressing that image and even embracing those qualities which had proved elusive in life? Something else to consider about The Travelling Companion, whose final performance in this NSO run is being recorded by SOMM – the first of Stanford’s nine operas to be commercially released.