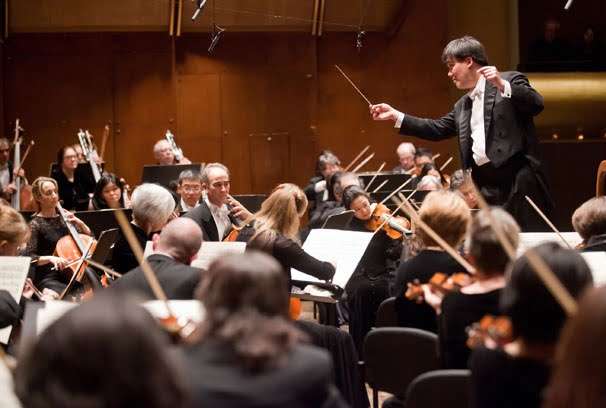 This second concert of the New York Philharmonic’s 15-16 Season in its renamed venue – Avery Fisher Hall is now David Geffen Hall – highlighted two other major changes, the appointment of Esa-Pekka Salonen as Composer-in-Residence and Frank Huang as Concertmaster.

Salonen has achieved much acclaim as a composer as well as a conductor. Before Alan Gilbert conducted what was to be a committed, well-managed and artfully balanced performance of the 20-minute LA Variations, the composer reflected upon the genesis of this fascinating work. In 1996, he ended a long dry spell with it, having emerged from an inner struggle between his love for the late-romantic composers he conducts so often and his compositional training under such as Franco Donatoni and Niccolò Castiglioni, and with Pierre Boulez an influence. Salonen’s solution to writer’s block was to integrate these influences in LA Variations and he described various elements of the work that were demonstrated by members of the orchestra.

Based upon two hexachords that together form a twelve-tone row, the brilliantly crafted and structured LA Variations integrates serial techniques with flashes of melodic material in a series of rapidly changing segments (not all are variations) that are based to degrees upon elements of the row, and include a folk-like episode, a flittering and whimsical scherzo, an intermittent series of “Big Chords”, and the lightly scored coda in which the hexachords return and peter out to a flicker. LA Variations is built upon kaleidoscopic instrumental combinations that explore various timbres and sonorities in shifting tempos, sometimes propelled by a “mantra” rhythm set against brass chords (a homage to Sibelius, Salonen informed us). An enormous and exotic percussion section reinforces the fast tempos and provides variety. Massive explosions contrast with soft and sonorous string lyricism in a cleverly juxtaposed sequence. LA Variations exemplifies Salonen’s impressive talents, and we look forward to hearing more of his music during his three-year tenure.

Given the numerous passages for violin in Richard Strauss’s Ein Heldenleben, this work served well to display the talents of Huang. He combined deft technique with ravishing expressivity to enhance the performance. Gilbert seemed intent on displaying the sterling qualities of the Philharmonic. He urged the strings to heights of romantic passion and let the brass section demonstrate how strong and bright it can sound (if sometimes overpowering the strings). Woodwinds were crisp and perky, particularly as wickedly impish ‘Adversaries of the Hero’ (critics!).

Gilbert briskly paced the more aggressive parts and let the orchestra simply run through the dense polyphony of the ‘Battle’ sequence with nothing more than sustained high volume and cues for canonic entrances, seemingly impatient to reach the stupendous climax. Horns emerged here with tremendous power, but often-excessive volume made this entire scene seem merely raucous and chaotic. By contrast, and imbued with wistful nostalgia, ‘The Hero’s Retirement’ contained some of the most captivating moments, while the forceful statement of the triumphant fanfare that concludes the work served to reinforce the power of this grandiloquent music drama, but Huang’s splendid solos were the highlight.