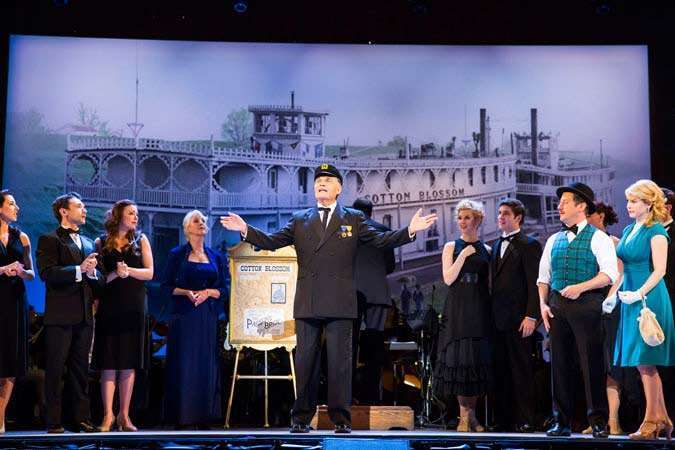 The New York Philharmonic has in recent years presented semi-staged productions of Broadway musicals, including Candide, My Fair Lady, Camelot, Company, Carousel, and Sweeney Todd. This season’s offering is Show Boat, an early landmark of American musical theater that transformed the genre from collections of songs and dances to the ‘book musical’, integrating plot-driven music and lyrics with dramatic and theatrical elements. Show Boat was also innovative in addressing serious issues of social importance – Ravenal’s compulsive gambling and his desertion of Magnolia, the ostracism of Julie owing to her mixed-race heritage and marriage to a white man, Julie’s alcoholism, and most significant of all, the portrayal of the contrast between the lives of blacks and whites living side by side along the Mississippi. Show Boat was also the first musical in which black and white actors played together – a pointed advance beyond the ban on such integrated performances that had prevailed in the era in which the show’s story is set.

This concert version was performed with minimal props and simple, attractive costumes. In lieu of a set, there was just an image of the eponymous Cotton Blossom on the rear wall of the stage, with changes of location indicated by text projected onto the backdrop. Lighting effects consisted mainly of changing colors to reflect the shifting moods of the story, and the aging of the characters was left almost entirely to the audience’s imagination. The focus thus was squarely on the music, lyrics and dialogue, augmented by Randy Skinner’s appealing choreography, which featured the dance routine of the comic duo Ellie May and Frank, ably portrayed by Alli Mauzey and Christopher Fitzgerald, as well as tap-dancing by Kendrick Jones and Correy West, joined by NaTasha Yvette Williams as Queenie in Act One and Erika Henningsen as Kim in Act Two. The smoothly executed production was directed by Ted Sperling, who conducted the New York Philharmonic in an excellent rendition of Jerome Kern’s memorable music. Sperling was particularly adept in synchronizing the orchestra with the actors’ speech, a crucial element of the score. Peter Fitzgerald’s sound design made the dialogue intelligible, but was over-amplified in choral numbers, making it difficult at times to discern the words. 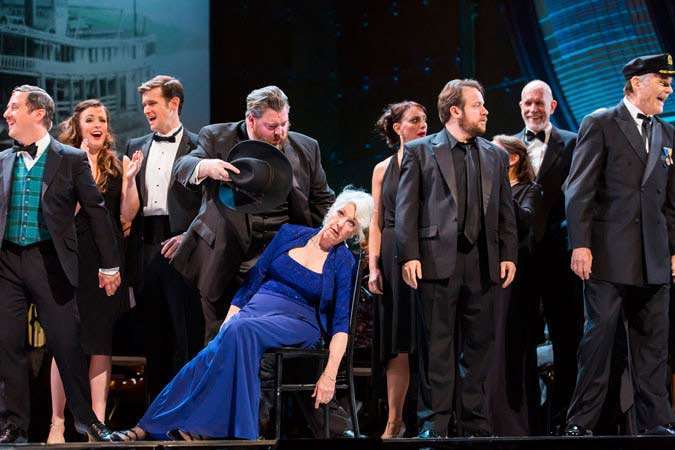 The cast of veteran performers and rising stars was uniformly excellent. Julian Ovendon and Lauren Worsham were charming as the romantic leads Gaylord Ravenal and Magnolia Hawks. Their beautiful duets ‘Make Believe’ and ‘You Are Love’ were highlights of Act One, along with ‘Ol’ Man River’, movingly sung by Norm Lewis as Joe, and ‘Can’t Help Lovin’ Dat Man’ sung by Vanessa Williams as Julie (along with Magnolia and Queenie). The music of those songs pervades the entire score, and all four numbers are reprised in Act Two, but sometimes with a significant change of mood, as when ‘Make Believe’ was sung by Ravenal and young Kim in the convent and ‘Can’t Help Lovin’ Dat Man’ returned as Magnolia’s audition-number at the Trocadero.

Lewis and NaTasha Yvette Williams were terrific as respectively Joe and Queenie, the black couple who work on the Cotton Blossom, joining – in old age – in the delightful comic duet ‘Ah Still Suits Me’, which had been added by Kern for the show’s 1936 film version. Queenie’s lament ‘Mis’ry’s Comin’ Round’ – a number that had been cut during previews of the original production but restored here – set the stage for the dramatic scene in which Julie is accused of miscegenation and she and her husband Steve (the able Edward Watts) are forced to leave the troupe. When Julie is later abandoned by Steve and struggling with alcoholism, her touching song ‘Bill’, marvelously given by Vanessa Williams, was the musical highlight of Act Two. Kern had originally composed that song to a lyric by P. G. Wodehouse for a show from which it had been cut.

Ellie May and Frank provide comic relief as Mauzey sang about ‘Life Upon the Wicked Stage’ and she and Fitzgerald joined in ‘I might Fall Back on You’, another often-cut number. With smaller singing parts, but lots of entertaining dialogue, Fred Willard as the easygoing Cap’n Andy Hawks and Jane Alexander as Parthy Ann, his domineering (but not dominating) wife, were both quite charming. Erika Henningsen gave an entertaining portrayal of Kim as a budding Broadway star, dancing and singing the jazzy ‘It’s Getting Hotter in the North’ – another restoration of a cut from the original production.

Perhaps because Act Two is spread over many years and several different locales, its plot lacks the coherence of the first Act, and the show comes to a rather implausible conclusion when all of the much-older characters (except Julie and Steve) are reunited on board the Cotton Blossom to the strains of ‘Ol’ Man River’. Although Show Boat is now rather dated, both in subject matter and musical style, it was a delight to hear its riches performed by a great orchestra.