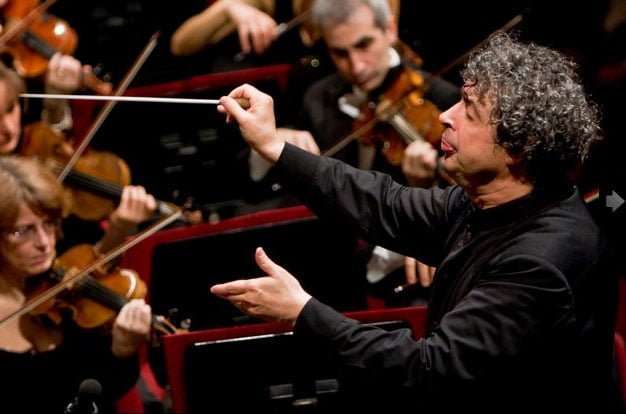 Although Mahler conducted the New York Philharmonic in 1909 and 1910, his Sixth Symphony was not premiered in America until 1946 under Mitropoulos (Koussevitzky had tried to hold the first performance in Boston in the 1930s, but the German publisher wrote him that the parts had “mysteriously disappeared in a fire”).

Surprisingly the only Symphony of Mahler’s that ends in a minor key, the Sixth is filled with episodic descriptions of the travails of life. There is no light or happy movement or even interlude. Although the score was published with the Scherzo second, Mahler himself conducted the work with the Andante immediately following the opening Allegro, thus igniting controversy that lingers to this day.

Both versions have received astounding performances over the years, however it is interesting to point out that the composer initially modeled the symphony after Beethoven’s Ninth, so the lobby that favors the slow movement in the third spot has some history on its side. I like the fact that the versions are so dissimilar in mood – it is almost as if they are two completely different orchestral essays.

Semyon Bychkov opted for the Scherzo second. Those of us who learned our Mahler in the 1950s and 1960s are more accustomed to hear the order of movements this way, and it is important to remember that performance history is a major factor in the psyches and inner ears of audience members. The New York Philharmonic has gone through a rather miraculous transformation over the past few years – much credit to the outgoing Alan Gilbert – and it was out in full force, the four harps alone indicating all hands on deck.

Bychkov led an exciting opening Allegro, but negated some of the intensity by waiting too long before commencing the Scherzo, thus squandering the relentlessness of his choice of movement placement. The Andante was superb, beautiful horn solos and lovely swelling in the viola section. Mahler’s beloved herdenglocken – an aural symbol of the passing of the 19th-century – were virtually inaudible (I couldn’t help screaming in my head “more cowbell!”) but overall this was music-making of a high order.

The big danger in the piece is that the ensemble will run out of gas in the Finale, and so it did this evening. Entrances were sloppy or off-beat, intonation began to waver, horns began to flub, and Mahler’s complex landscape became simply muddled. However, the first three movements more than compensated for any final confusion. The Sixth is a difficult work, a bear to perform and to understand, and maestro and forces went a long way to make their explication cogent and yet mysterious.