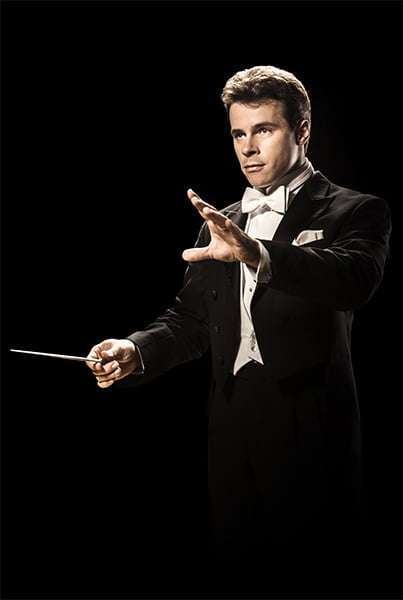 The young (34) Czech conductor Jakub Hrůša is on the fast track to big things – he has Glyndebourne on Tour’s music director under his belt and is about to take up the chief conductorship at the Bamberg Symphony (Jonathan Nott is moving to the Suisse Romande Orchestra: will he ever get a British orchestra?).

This was the first time I’d heard Hrůša in one of the super-size romantic Symphonies, and the overall impression from this performance of Mahler’s Third is that he doesn’t do superman, high-octane emotionalism. His style is more objective and enabling, and having played in orchestras (as a trombonist) this gifted musician is well placed to get what he wants in terms of ensemble, momentum and detail – in the latter there seemed to be nothing he wasn’t aware of.

There were a few moments when, for all his opera-house savvy, he could have taken more dramatic liberties, but he presided over a magnificently elemental first movement that left Nature’s supremacy in no doubt. Byron Fulcher’s trombone solo expressed the life-force’s baleful reality and Jason Evans’s lone trumpet suggested the Rothko-like void of Mahler’s canvas, and whatever else was hurled at you throughout this 30-plus-minute perfect storm, these two solos set the tone of the movement. Hrůša took the orchestra with him in the over-confident military march’s La valse-like disintegration (with overloud off-stage percussion) – you wonder if Berg had this music in mind when creating the role of Drum-Major in Wozzeck – but his return to the Nature music clinched its visceral ascendancy. The movement depends for its effect in some insane juxtapositions and Hrůša added his own sense of the material anxiously regrouping to reassert its power and its cohesion.

After such a showstopper, Hrůša’s characterisation of the second, ‘meadow-flower’, movement was all charm, and the quality of the playing revealed the Philharmonia at its most refined, and he was just as impressive in setting up the initially carefree mood of the Scherzo. The posthorn solo, while beautifully played by Christian Barraclough, crucially wasn’t distant enough. In Mahler’s creation myth, the posthorn is his Adam, the first glimmer of consciousness that confuses brute Nature – which was brilliantly realised – but Hrůša, rather oddly, played down the pivotal moment to the whole Symphony, the Scherzo’s closing outburst of pure savagery that won’t, or shouldn’t, release its grip.

Bernarda Fink sang Nietzsche’s ‘Midnight Song’ as though the posthorn’s remoteness and Nature’s will to live had been present and correct, and her warm mezzo and unaffected delivery suddenly became the figurehead for the rest of the Symphony, although her contribution may have been diminished for some by the absence of expressionist portamento in the oboe’s and cor anglais’s bird-like wailings. The Tiffin Boys’ Choir and the Philharmonia Voices’ women sang a forthright “Es sungen drei Engel” that dissolved magically into the Adagio love-hymn. Hrůša drew a small but solid sound from the strings that very slowly opened out as the music distanced itself from memories of the previous movements, and the conclusion was all the more powerful for sounding so inevitable. You will have heard more visceral accounts, but, various misgivings notwithstanding, Hrůša delivered a performance that was consistently involving, and he is blessed with an ear that understands this Symphony’s long-range connectiveness. It was immensely satisfying.

Before the main concert the Philharmonia Chamber Players gave Mozart’s Horn Quintet. Kate Woolley’s immaculate horn-playing dominated throughout, rather like those piano with string-quartet arrangements of some of the Piano Concertos, so that the strings’ lean classical sound (with two violas) didn’t register that strongly. Schoenberg’s Verklärte Nacht came with a strong feeling of ensemble, its narrative based on the poem by Richard Dehmel unfolded easily, the full sound didn’t strain for opulence, and the moods of tenderness, hysteria and consolation were expressed with great directness. It was quite an upbeat to the Mahler.