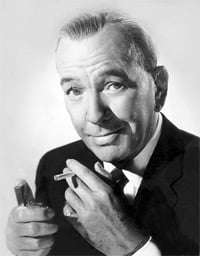 Everybody knows Noël Coward, Britain’s own Renaissance man of the theatre who wrote some fifty plays, revues, poetry, short stories and hundreds of songs. He was an actor, a director, a painter and a designer. What he couldn’t do probably wouldn’t be worth bothering about. Since his death in 1973 there has been a steady stream of revivals of his plays, shows about his music and interest in his diaries that record nearly three-quarters of the twentieth-century. As a composer-lyricist of outstanding talent he is one-third of the triumvirate that also comprises, in John Michael Swinbank’s opinion, Cole Porter and Stephen Sondheim, the three greatest composer-lyricists of their age, although some might also wish to include Irving Berlin on that list.

Coward was indisputably a genius at matching a witty lyric to a charming melody and Swinbank’s programme demonstrates this in spades. However, he doesn’t use Coward’s work to illustrate much of The Master’s life, but rather takes us on a journey through his own career. English-born but long-time resident of Perth (Australia) Swinbank is an actor, singer and raconteur, acknowledged as “Australia’s foremost Coward exponent”. His affinity with Coward’s material has taken him on many overseas tours, often to places where Coward himself worked and stayed in the Far East, Middle East and India. He evokes the re-opening of the Raffles hotel in Singapore in 1991, Hong Kong at the time of the hand-over in 1997, and gala performances on the QE2. He has even been invited to fire Hong Kong’s noonday gun which Coward immortalised in ‘Mad dogs and Englishmen’ (“In Hong Kong / They strike a gong / And fire off a noonday gun / To reprimand each inmate / Who’s in late”).

Swinbank doesn’t quite capture the clipped enunciation that was Coward’s trademark, but then hardly anybody can – apart from the true genius that is Stanley Baxter. Swinbank is perhaps better at the more romantic numbers such as ‘I’ll see you again’, ‘If love were all’ and ‘A room with a view’. The more comedic songs such as ‘A bar on the Piccola Marina’, ‘Uncle Harry’ and ‘Alice is at it again’ come over as being rather arch because Swinbank lacks the finesse of Coward’s own performances, and the lyrics don’t trip off the tongue naturally with Coward’s elegance. On the credit side, however, Swinbank performs an interesting medley of Coward’s ‘I’ll follow my secret heart’ and Stephen Sondheim’s ‘Send in the clowns’, two songs that really go together well. He even does the updated lyrics written by Sondheim for Streisand.

After the interval, Swinbank jettisons his tuxedo for khaki shorts and solar topee in order to perform ‘On the road to Mandalay’, but in a rather unnecessary jazz arrangement à la Sinatra. He should stick to the straight version popularised by Peter Dawson. He finishes with Cole Porter’s ‘Let’s do it, let’s fall in love’ in a mixture of Porter’s original lyrics plus Coward’s rewrites and Swinbank’s own contribution, although he flunks “Moths in your rugs do it, / What’s the use of moth balls?”

Pianist and musical director Tim Cunniffe provides sympathetic accompaniment and in an interlude the members of the audience are asked to guess the Coward songs that Cunniffe hides within the musical styles of Mozart, ABBA, Elton John and Stephen Sondheim. It’s a good game – and there are prizes! All in all it’s an entertaining show but in something called “Noël at Noël”, it would be nice to have a little more about Coward’s exceedingly busy life and a little less about the travels of John Michael Swinbank.