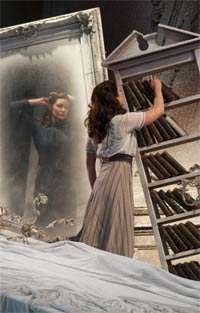 There is much to admire in this new production of Russia’s greatest opera, particularly the singing and the orchestral playing, but best for the most part to keep eyes closed as the action rarely reflects the libretto, and is risible when set against Tchaikovsky’s glorious adaptation of Pushkin’s timeless verse-novel. True, there are some striking effects (a glowing red carpet in Act Three for the entrance of the guests is particularly effective) but most of it makes little sense.

So, this staging opens here in the depths of winter, with the house of landowner Madame Larina dilapidated, the furniture covered in snow: think of the snow-filled dacha in David Lean’s film of Pasternak’s Doctor Zhivago. This runs contrary to most of the sung words: such as the arrival of the men who have been bringing in the harvest (!), and the fact that this is a grand and sucessful country estate. Laughable! During all of this Onegin observes, but for what purpose is unclear (his arrival is later with Lensky). At least his stolen glances with Olga and Tatyana during the orchestral ‘Introduction’ add pertinent layers to what is to come.

Act Two’s set-piece, the Duel, goes to waste here: it is not a duel. The protagonists are supposed to stand back to back, walk four paces (it’s all in the libretto and the music) turn and fire. Instead, Lensky and Onegin walk away from each other to opposite ends of the stage before the music sanctions this. Onegin puts his coat on, and fires nonchalantly, killing Lensky. One is left unmoved by this. However, this descent from friends to enemies begins so well during the Act Two ball: one really felt Lensky’s growing rage with Onegin’s insouciant taunts, though at Lensky’s demand of “satisfaction” from Onegin the party guests dance the scene out, as though nothing has happened, and Monsieur Triquet’s cameo is a horribly angry and aggressive one, for no reason. 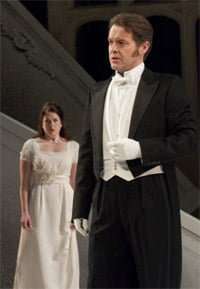 Fast-forward five years to Act Three, and St Petersburg, or Petrograd, as a large picture of Lenin is unveiled inside a wardrobe whilst Bolshevik workers lay the red carpet for Prince Gremin’s arrival – here he is a Red Army General. Those workers are cleaning out the dilapidated dacha, but their placement is at odds with the libretto: Onegin sings “the glitter of society does not dispel my misery”, yet there is no glitter to contrast with his pessimism. Only the final scene really comes off: the direction concentrates the action to a feverish level between Onegin and Tatyana, thrillingly so.

The central character of Tatyana is ably assumed by Anna Leese: at-one with the orchestra under the malleable conducting of Alexander Polianichko, she delivered the ‘Letter Scene’ with heartfelt beauty and intimacy, riding its emotional waves with aplomb, and she made utterly believable, through acting and voice, Tatyana’s transformation from hormonal teenager to the confident woman of Act Three, pushing Onegin away with defiance.

Mark Stone makes a fine Onegin. There’s oozing passion in his voice come the close, whereas earlier the words trip of his tongue securely without a care.

Peter Auty’s Lensky was mixed, suffering from being made to be petulent and silly rather than a wronged man. Come his Act Two aria, he was in full voice, with fervour, ranging from regret to vehemence.

Gareth Dafydd Morris’s Monsieur Triquet was far too static to hold much appeal (though ably sung), and whilst Graeme Broadbent’s Prince Gremin was similarly devoid of warmth, the security of his paean to love warmed the cold staging. Elizabeth Sikora gave a suitably busy and warm-hearted Filippevna, and Anne Mason invested Madame Larina with authority. Hannah Pedley (Olga) was in full voice from the start, her youthful verve always captivating.

Particularly pleasing was the City of London Sinfonia’s contribution: the music was alive and lyrical, a thoughtful rendition of the score, which coupled with the fine singing made for a musically satisfying evening. The thunderous rain hitting Opera Holland Park’s tent added to the frisson!