Jonathan Dove
Flight – Opera in three Acts to a libretto by April De Angelis [sung in English, with English surtitles] 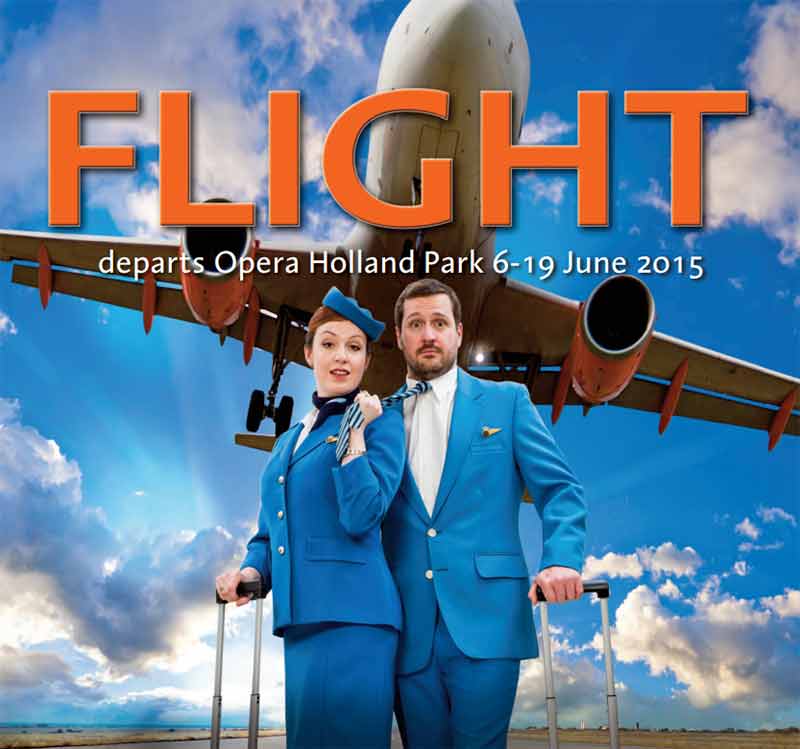 Jonathan Dove’s engaging opera, Flight, commissioned by Glyndebourne comes up freshly minted in this staging by Stephen Barlow at Opera Holland Park. The setting is a simple, dull-grey, airport terminal with uncomfortable metal seating, flight-departure board, lifts from other levels, and up above the flight controller’s cramped office. There is much coming and going from passengers not involved in the drama to give the place a transiently populated appearance – including some clever visual gags: one character is seen departing for a skiing holiday returns subsequently with a broken leg. Even the pre-performance announcements, about turning off mobile phones, ensured the audience got to its “departure gates” got everyone into the spirit. The wit of the piece, fondly remembered from the original production, was all there and integral – it has moments of true comedy, and not a verbal gag of April De Angelis’s witty libretto was missed so good was the diction of the cast. It was great to hear laughing-out-loud, although a shame that the surtitles sometimes gave the lines before they were sung.

However, this production also brings relief from the farcical moments by abruptly switching to genuine pathos – the Minskwoman’s deeply-felt meditation on impending motherhood, and the refugee’s description of he and his brother’s unhappy attempt to flee a strife-torn state by stowing away in an airplane wheel compartment: all very pertinent today, sadly.

Having the outsider sung in the otherworldly voice of a countertenor is a masterstroke of Dove’s setting, as is the idea of the airport controller as a Deus-ex-machina-type role sung by a soprano with a stratospherically high range. Having the two potentially romantically-linked adds something to the mix. The singers of these two roles were outstanding. James Laing’s voice sounded extremely well in this acoustic with its light, plaintive quality – his final-Act narration was incredibly intense. He blended beautifully with the ethereal soprano of Jennifer France. Her contribution was also superb – stunning vocal control high above the stave and when the character needed a bit of steel that was there too. The roles of the minskman and minskwoman were also well taken. Victoria Simmonds’s lush mezzo was heard to great advantage at the start of Act Two in her scena, and Nicholas Garrett’s smooth baritone fitted the suave diplomat perfectly.

Kitty Whately and George von Bergen, as the smug self- and sex-obsessed cabin crew, were having a whale of a time, singing and playing with panache and perfect comic timing. It was hard to keep your eyes off their antics, and it would be easy to populate this review with ‘spoilers’…

Lucy Schaufer’s older woman was both absurd and touching; Ellie Laugharne and Jeffrey Lloyd-Roberts as the couple trying to re-kindle a lost love likewise – she vocalising a nice bit of operatic ‘rage’ in the final Act. John Savournin also made in impact in his short moment in the spotlight.

In the pit was the City of London Sinfonia and Brad Cohen, relishing Dove’s brilliant, melodic and inventive scoring. All the clever depictions of planes taking off and landing, and the storm interlude, were played with precision and with bravura. Dove’s gentle send-up of some operatic convention (Rossini-type patter and other romantic and expressionistic writing) was integrated in a reading of pace and force, but also with genuine feeling. Get tickets for this first-class trip. With this and Puccini’s Il trittico, Opera Holland Park has launched its 2015 season in some style.