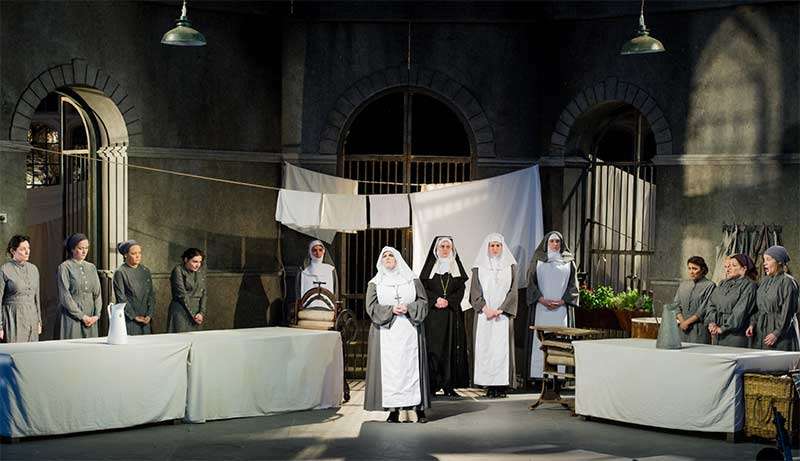 There has been no attempt to impose any sort of link to the three productions, although Neil Irish’s windowed interior in Gianni Schicchi (first mounted by OHP in 2012 in a double-bill with Mascagni’s Zanetto) adapts well to Suor Angelica’s convent and the Seine’s port in Il tabarro. The only major bit of cast-crossing is Anne Sophie Duprels as the soprano lead in Il tabarro and Angelica (the latter being the bigger role), but even with a fair amount of doubling-up in the smaller roles of all three operas, OHP is still fielding a formidably big cast of about 30, as well as a chorus. 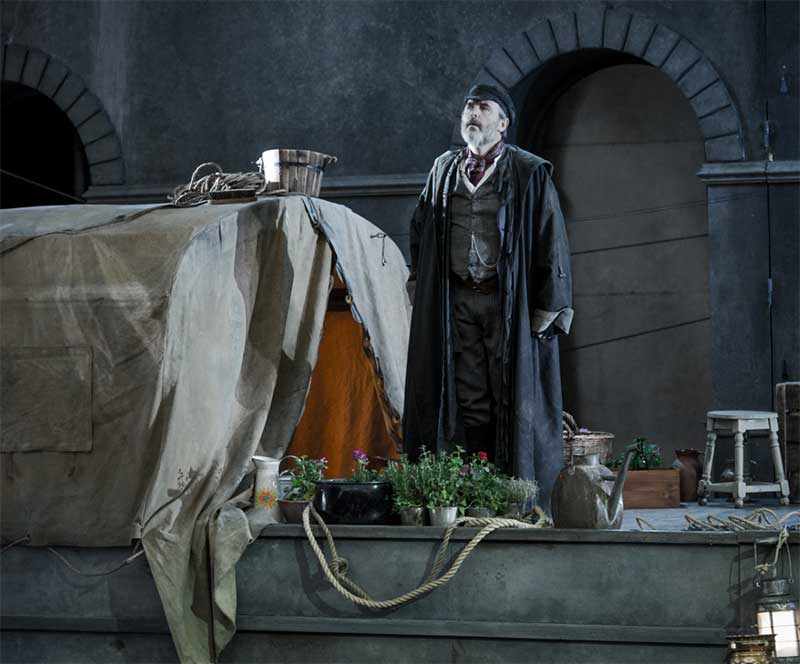 Duprels is a singer-actress of singular power. Her voice, not always beautiful near the top of its range, is nevertheless flexible and lyrical, and ideal for the trapped and tragic female figures that inspired Puccini throughout his career. As Il tabarro’s down-trodden Giorgetta, miserably married to the much older barge-owner Michele, Duprels pulled of a visionary duet with Jeff Gwaltney’s hunky stevedore lover, Luigi, as they dream of a better life. Gwaltney’s tenor has filled out considerably since his Dick Johnson in OHP’s Fanciulla last year, and he too acted well and looked the part. Presiding over everything, though, was the bleak, unhappy Michele of Stephen Gadd, who cast a long Scarpia-like shadow in his gripping aria. His menacing presence vastly expanded the role of the betrayed husband with the sort of bitter reality that makes this the most verismo of Il trittico, heightened by the realism of the barge that fills the stage. You also have to admire the care, brilliantly reproduced by director Martin Lloyd-Evans, Puccini lavished on the spicy cameos (with a notable Frugola from Sarah Pring) – he even makes room for a sweet couple who rub-in the happy side of love’s young dream.

Oliver Platt has set his staging of Suor Angelica in the laundry room of the convent to which the aristocratic, unmarried Angelica has been banished after bearing an illegitimate son. There is a crucifix on the wall, but the atmosphere of chilly Christian charity is summed up by the grilles and bars filling Irish’s arcade. Again, there was convincing scene-setting work from the smaller roles of nuns, novices and postulants, which Platt has directed neatly so that Duprels’s Angelica slowly emerges in identity before embarking on the emotional crux of the whole evening in her meeting with her aunt, La Zia Principessa, who requires her errant niece to sign away her inheritance and who tells her that her bastard son has perished. 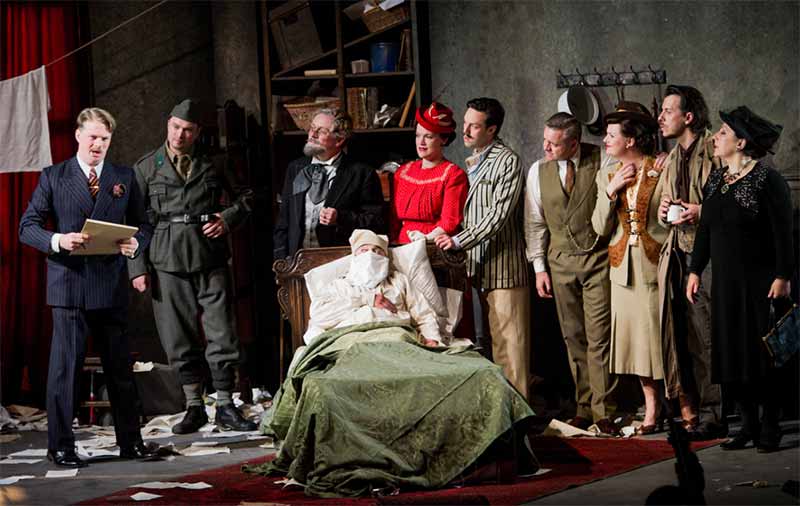 Duprels’s singing, initially meltingly soft, gathered in expressive force as she bears her aunt’s cruelty, and her aria ‘Senza mamma’ was properly heart-breaking. Rosalind Plowright’s cleverly conflicted portrayal of the aunt – in the programme book, Plowright writes that she thinks she’s the only singer to have sung both roles – completed this powerful confrontation. She looked wonderful in her 1940s’ tailored twinset, matched by the hauteur and authority of her singing, and the two artists really sparked off each other. Platt’s realistic staging explains his not giving us the dying Angelica’s miraculous vision of her son with the Virgin Mary – apotheosis for some, emetic for others – but even in this respect if you feel you was robbed, the Duprels-Plowright showdown and the closing scene were musically and dramatically so strong as to more than make up for it.

For all its concentration, Il trittico is a long evening, but the revival of Gianni Schicchi, executed with considerably more panache than I recall from its first outing, significantly lightened the gloom. The family that has pinned all its hopes on its inheritance from a still-warm if dead relative, is played as a gallery of predatory, hypocritical grotesques, led by the grisly Zita of Sarah Pring, and any laughs stem from blackest humour. Richard Burkhard had the just the right sort of comic charisma for the sharp-eyed, devious Schicchi, the socially unacceptable fixer commissioned by the ‘grieving’ relatives to re-write the will, and his virtuoso vocal characterisation was pure pleasure. Anna Patalong seized her two-minute moment of glory with a ravishingly sung ‘O mio babbino caro’ which had the added distinction of fitting in neatly with the drama.

Binding the whole evening was Stuart Stratford’s conducting of the City of London Sinfonia. Each piece had its strongly drawn personality – Il tabarro, with its klaxons, fog-horns and other noises off, was full of atmosphere and creepy tension, the musical vision at the end of Suor Angelica was all you really needed by way of ecstatic revelation, and Stratford did a marvellous job of highlighting Puccini’s dwelling on comic detail in Gianni Schicchi without losing the comic pace.