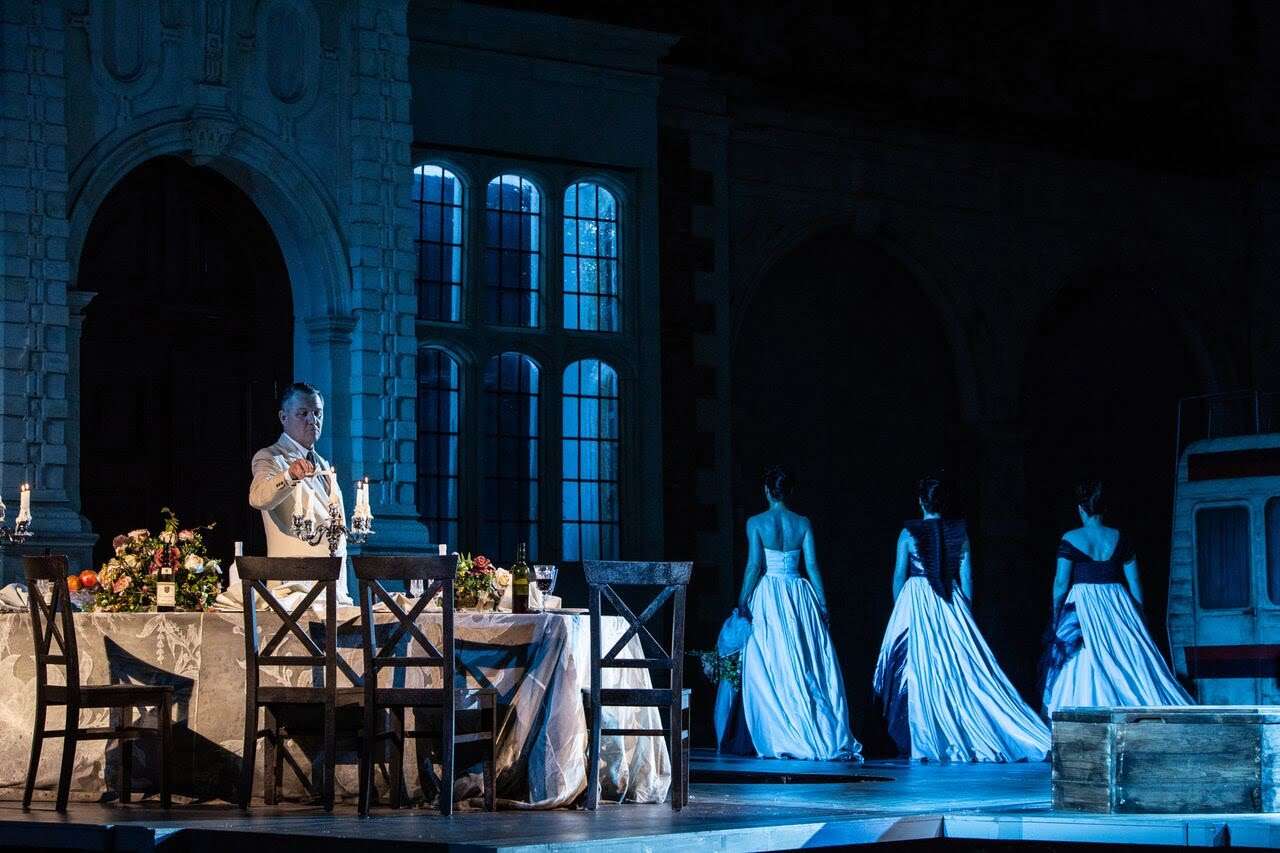 With German repertoire not looming large at Opera Holland Park (apart from Mozart, only Fidelio, and Hansel and Gretel), there is an inescapable sense of confidence saturating the company’s first foray into Richard Strauss with Ariadne auf Naxos, for many his most beautiful stage-work. The confidence is all down to the cast and conductor being the same for when this Scottish Opera co-production had its run in Glasgow earlier this year, with one exception – Stephen Gadd replaces Thomas Allen as the Professor of Composition (Strauss and Hofmannsthal’s Music Master).

Antony McDonald, who both directs and designs (his costumes have considerable flair), has plotted the high- and low-art dysfunctions of the Prologue so succinctly that their transformations in the second half are an entirely natural consequence of the Composer’s lofty opera seria Ariadne auf Naxos and Zerbinetta’s saucy burlesque being compressed into one hybrid entertainment to accommodate the all-important firework display on the whim of the unseen oligarch, a man who we suspect knows the cost of everything and the value of nothing. McDonald has updated the period, not that it makes concept-type inroads into the original, and the setting is supported by many a contemporary slant, the most significant being the spoken role of the Major-Domo cast as a stressed-out female Party Planner, and the Composer, a soprano trouser-role, now a gender-specific female with fluid attractions both for Zerbinetta and Harlequin, eventually and teasingly resolved. 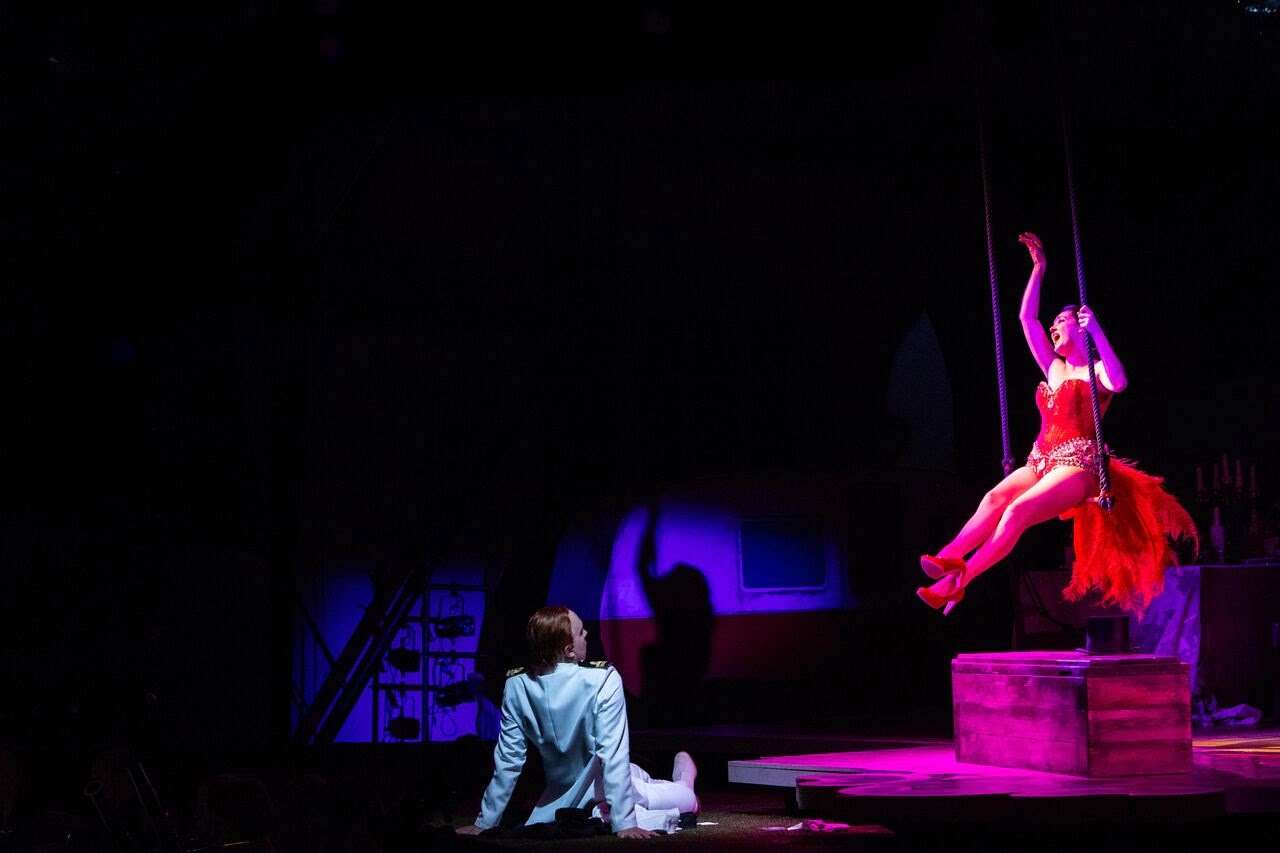 McDonald’s Prologue set of two elderly caravans and a non-fragrant Winnebago doing duty as the artistes’ dressing-rooms trashing the imposing entrance of the house of the richest man in the city precisely states the them-and-us pecking-order. I don’t know if, in Glasgow, they were moved out of sight for the Opera, but having them staying on view on the Holland Park stage effectively makes the point that the ensuing theatrical transcendence had to start somewhere. Otherwise, the desert-island where abandoned Ariadne and passionate Bacchus and Zerbinetta and her comic quartet play out their parts in the drama is all set among the detritus of the dinner party the oligarch’s guests have just left to watch the Opera, as we the audience is now doing.

Both parts of the work are dominated by three major roles for women, and I hope I’m lucky enough to hear them again sung with such style and authority. Julia Sporsén’s Composer hits the spot with her volatile, intense and outrageously self-centred artistic tizzies, pressing her suit on Zerbinetta with full-on eroticism, and then suddenly bringing us into her perspective with an electrifying account of her hymn to the power of music that gives us the full benefit of her lovely, lightly-shaded voice. The Prologue is sung in English (a good, demotic translation by Helen Cooper), a ploy that makes the collision of temperament, comedy and action all the more cursive, only slightly let down by the barely audible (and without surtitles) Party Planner from Eleanor Bron, sporting a hoity-toity Glaswegian accent as she delivers the rich man’s edicts and puts down all these ghastly theatre folk. 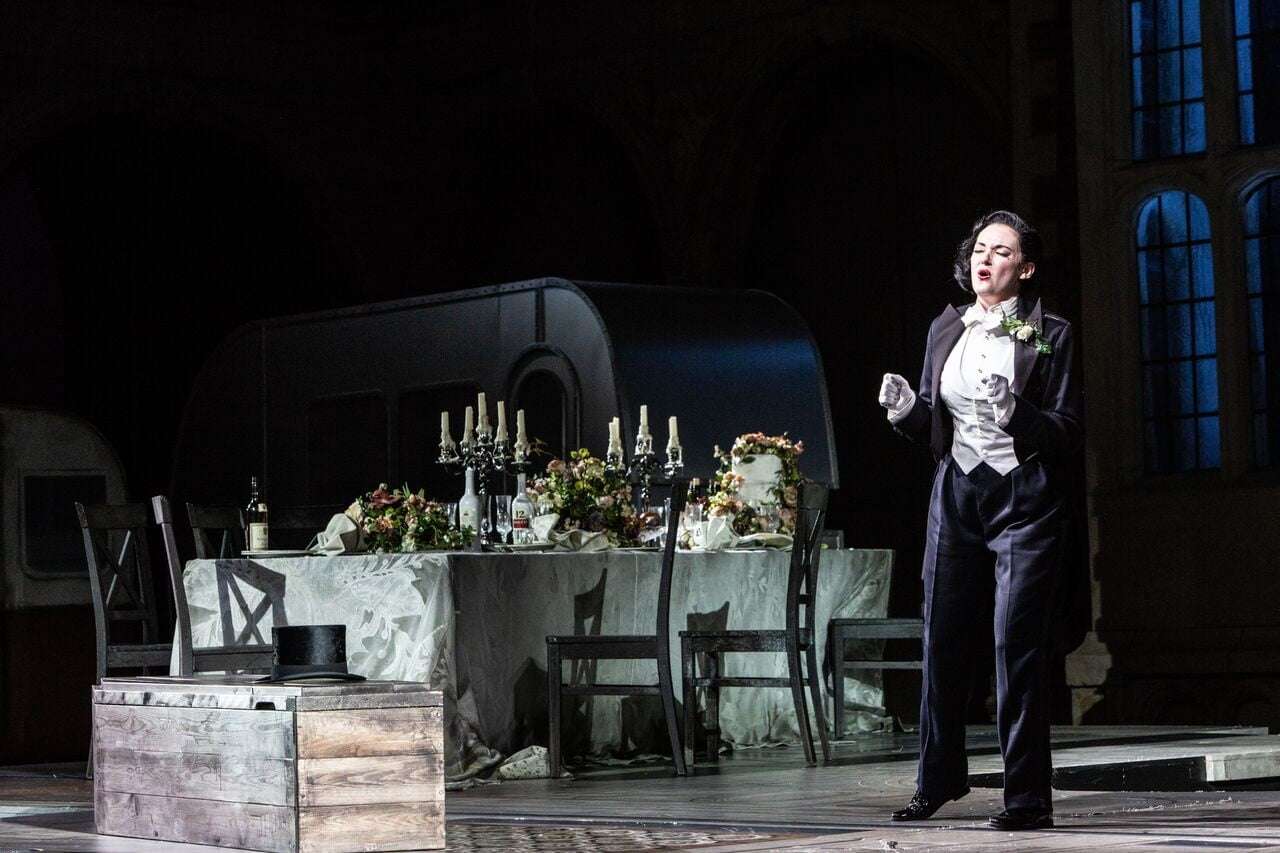 Jennifer France’s Zerbinetta brings the Composer down to earth in the Prologue with a lovely blend of pragmatism and tenderness, then in the Opera opens out into a sensational account of the long coloratura aria ‘Grossmächtige Prinzessin’ as she slips out of her top hat and tails to reveal herself in scarlet and gold, for a short while converting the Holland Park theatre into a sexy German cabaret.

The Prima Donna doesn’t get much to do in the Prologue beyond appearing in curlers and being diva-like, and, as the doom-laden Ariadne in any production, has her work cut out to be the focus of the evening. Mardi Byers is a bit approximate at the top of her voice, but the glow of her transfiguring ascendancy carries all before it, with superb support from her three graces, Echo, Naiad and Dryad, beautifully directed and dressed as though for a Vogue fashion shoot, and magically sung by Lucy Hall, Elizabeth Cragg and Laura Zigmantaite. As Ariadne’s knight to the rescue, Kor-Jan Dusseljee sings Bacchus’s music with tireless, ardent lyricism, oddly not matched by a rather anonymous presentation. Stephen Gadd’s excellent Professor of Composition reined in the Composer with eye-rolling patience, and Jamie MacDougall gives a sharply observed Producer (Dancing Master). Alex Otterburn’s outstanding Harlequin leads a grungy crew of comedians, who lighten up the Greek side of island life brilliantly.

Brad Cohen’s conducting and the City of London Sinfonia’s playing are completely with the singers, with some of the tightest ensemble I’ve heard at this venue. The detail, with some impressive solo work, doesn’t force symphonic sweep, and there are lovely things from harmonium, piano and two harps. As it became dusk outside, so Wolfgang Göbbel’s poetic lighting made its mark. This was Doctor Theatre working his magic spell.