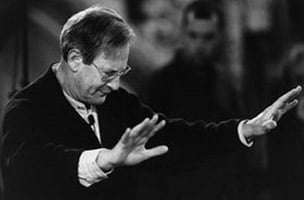 Sir John Eliot Gardiner and his Orchestre Révolutionnaire et Romantique are currently setting Brahms “in an historical context”; not only with other composers but, of course, in the use of instruments and playing styles of the period.

This second concert of the project (to be heard in various places, although I don’t think London gets the whole cycle, but recordings will appear on the Soli Deo Gloria label) got off to a lively start, the St Anthony Chorale (incorrectly attributed to Haydn) made springy, the orchestral textures lucid and tangy-sounding (although in the ‘hunting’ variation, the horns were either too reticent or too rough in timbre), the performance as a whole the antithesis of ‘heavy’ German Romanticism; thoughtfully expressive, too, but not always with the gravitas that the music has acquired over the years.

Similarly in the First Symphony, there was an unimpeachable four-dimensional effect to the sound – strings, winds, brass and timpani in meaningful accord, although the drums often needed to be both louder and more incisive – the ‘rattle’ on the very final chord suggested this was more than possible. The performance, while not wholly convincing – although the orchestra’s textural luminosity was – was an uneasy mix of strictness and flexibility, and there were times when the orchestra (11 first violins, 5 double basses) lacked volume and impact – although the 10 second violins, antiphonal of course, cut through with remarkable presence and really stirred the ‘argument’) – yet in a hall of this size and capability for dry analysis, while detail abounded, Heft did not, and although a ‘full’ symphony orchestra could be regarded as too ‘thick’-sounding, the music demands more weight and fortissimo than it was possible to conjure on this occasion.

Nevertheless, while the ‘tragic’ and ‘dark-to-light’ associations usually appended to this music were somewhat suspended, there was a compensating and clarifying eagerness that made the music incisive but not metronomic (Gardiner not adverse to Romantic fluctuations). Indeed the energy generated in the first movement rather argued that the repeat of the exposition is superfluous (and was here tamely re-introduced by a too-gentle tap on the timpani), the development rising in tension. The slow movement was exceptional in its blossoming expression – plaintive woodwinds were exceptional and Peter Hanson’s violin solo was akin to translucent light – but the Intermezzo-like third movement was too frisky and edgy. The finale, without ceremony but not meaning – the ominous pizzicatos and trombones’ sombre tones setting the scene with Anneke Scott’s horn solo a glorious moment (these instruments troublesome in response at other times) leading to striving affirmation, Gardiner putting the brakes on for the motto’s triumphal return – Brahms’s score suggesting otherwise – but ‘authentic’ doesn’t necessarily mean ‘pedantic’.

In between, but no mere fillers, was Brahms’s orchestration of Schubert’s “Gruppe aus dem Tartarus” (Schiller), trombones accentuating rather than dominating, and (presumably also Brahms – in his address Sir John Eliot implied that the programme was misleading) “An Schwager Kronos” – played attacca. Both left a big impression, as did a Schubert original, “Gesang der Geister über den Wassern”, the orchestra being of violas, cellos and double basses – sepulchral, a male-voice hymnal (animated at the work’s mid-point) heard across starlit water, double basses doing a very fair impersonation of bullfrogs.

In all three works the 20 men of The Monteverdi Choir were professional to the core, so too in Brahms’s ‘Alto Rhapsody’ (Goethe), the strings suggesting a turbulent and rugged landscape, Nathalie Stutzmann making a profound contribution and all coming together for a rapt conclusion.