Over the Rainbow
A cabaret of songs by Harold Arlen & E. Y. Harburg 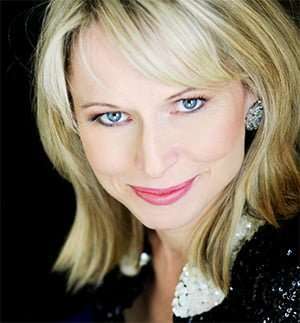 A warm welcome back to Karen Oberlin, who charmed us at The Crazy Coqs last year with her tribute to Doris Day. She now presents an equally delightful programme featuring the catalogue of two great songwriters, Harold Arlen and E. Y. ‘Yip’ Harburg. Their work includes some of the best songs ever written, not to mention their timeless association with The Wizard of Oz (1939). Arlen’s melodies are haunting, stylish and buoyantly tuneful, courting Irving Berlin’s highest praise, and Harburg was simply one of the finest lyricists to come out of the USA – he excelled in impish, wickedly clever rhymes. Oberlin quotes from Harburg: “Words make you think thoughts. Music makes you feel a feeling. But a song makes you feel a thought.”

Arlen and Harburg wrote many hits with other creators. Nathan Martin, who accompanies Oberlin superbly, gives us reminders of Arlen’s ‘Get happy’, with lyrics by Ted Koehler, and Harburg’s ‘April in Paris’, his words to Vernon Duke’s melody proving eternal, though he had never been to Paris beforehand (a fact gleaned from Oberlin’s lively commentary). She gives renditions of Arlen and Koehler’s ‘I’ve got the world on a string’, plus the classic song of the Depression, ‘Brother, can you spare a dime?’. With a melody by Jay Gorney, it is not only a masterly evocation of its period, but also an indication of the subjects close to Harburg’s heart, such as social injustice and racial equality that were to permeate much of his work. He was blacklisted in 1951 for a ten-year period, and was sacked from writing the lyrics for A Star is Born, to the distress of Judy Garland.

Oberlin opens with one of the team’s most wistfully gorgeous numbers, ‘Fancy meeting you’, first sung by Dick Powell in the film Stage Struck (1936). Then Oberlin and Martin perform the standard, ‘It’s only a paper moon’ in an unusual but effective waltz tempo. Oberlin then tells an amusing anecdote about the songwriters’ stay in the house of opera-singer Lawrence Tibbett where they wrote that most heartbreaking of ballads, ‘Last night when we were young’. A poignant evocation of lost love and disillusion, it was admired by Tibbett, but cut from his film Metropolitan, a fate it also suffered in films of Frank Sinatra and Garland, though they both recorded it. Oberlin’s moving performance is a highlight. In contrast is a delightfully freewheeling, jazzy account of ‘Down with love’ which prompts laughs with the advice that one should “give it back to the birds and bees and the Viennese.”

Two songs from The Wizard of Oz precede one of the best versions I’ve heard of the hilarious ‘Lydia, the tattooed lady’, presented by Groucho Marx in the film At the Circus. Oberlin tells of Marx’s delight with the song – he likened it to the work of his idols, Gilbert & Sullivan – and rightly predicted that it would become a signature number, though Oberlin relates the troubles the piece had with the censors! ‘Happiness is a thing called Joe’ was launched by Ethel Waters in the movie version of Cabin in the Sky (1943), another enduring ballad to which Oberlin brings warmth and feeling. A co-star in the picture was Lena Horne. Arlen and Harburg were to write a whole show for her, Jamaica (1957).

An earlier Broadway musical, Bloomer Girl (1944), set just before the American Civil War, appealed to Harburg with its theme of women’s emancipation and the freedom of slaves. It included ‘Right as the rain’, but Oberlin strangely fails to allow that it was a hit, though it ran for 643 performances! ‘Silent spring’, inspired by Rachel Carson’s book, is a sober reference to the destruction of the environment, for which Oberlin suppresses her natural exuberance and gives full weight to the poignant but ultimately hopeful setting. The evening climaxes, inevitably, with ‘Over the rainbow’, to which Oberlin brings individuality, and a coup by presenting a second chorus that was sung by Garland later in the film, but cut: a splendid surprise with which to end a classy evening.