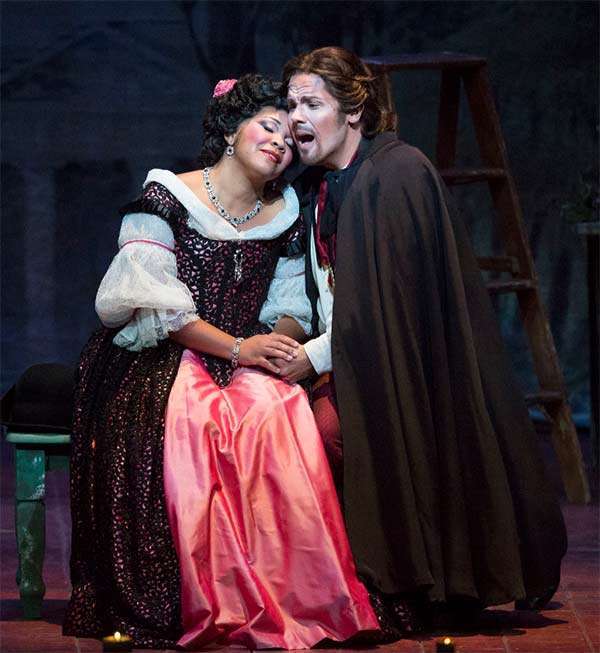 Palm Beach Opera’s production of Donizetti’s Don Pasquale embraces an excellent quartet of principals and fine orchestral playing. An attractive and well-timed staging combine to demonstrate why it is one of the most delightful of comic operas.

The story is an elaborate plot to trick Don Pasquale, a wealthy aging bachelor, into consenting to the marriage of Ernesto, his nephew and heir, to Norina, a young widow. Dr Malatesta, Pasquale’s physician and a close friend of the lovers, arranges a sham marriage between her and Pasquale. He introduces Norina as his sister, ‘Sofronia’. Once the marriage contract has been signed, ‘Sofronia’ begins spending the Don’s money, while denying him even a kiss and making him believe she has a follower. The plotters convince Pasquale that allowing Ernesto to marry Norina and bring her to live in his house would persuade the Don’s ‘wife’ to leave him. He consents. Norina then reveals her true identity. The forgiving Don withdraws his threat to disinherit Ernesto and blesses the marriage.

Carlo Lepore was outstanding as the bumbling Pasquale, his voice rich and powerful. His rapid-fire delivery made for some of the most hilarious moments. In addition to his amusing portrayal, Lepore made the Don a sympathetic character as he suffered the plotters’ cruelty, yet magnanimously accepted defeat at their hands. 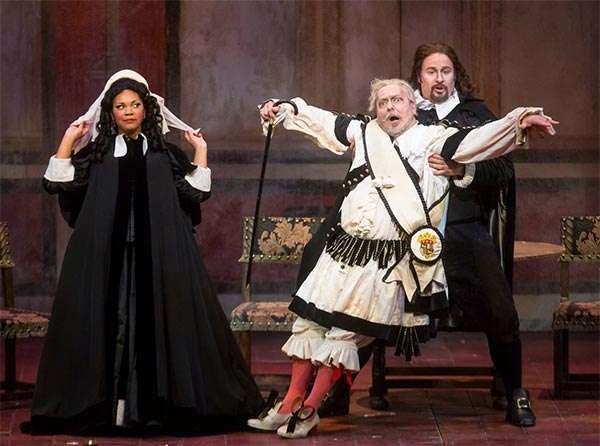 Janai Brugger was marvelous as Norina, her voice radiant. Her acting was brilliant as she first seduced the gullible Don and then threw off her convent garb, transforming into a shrew who takes over control of his household. Later, she effectively portrayed Norina’s sympathy and remorse after she slaps Pasquale, leading him to declare despairingly, “Ah! È finita” (It’s all over). Her love-duet with Ernesto in the final Act was touchingly rendered.

Lucas Meachem gave an adept representation of the manipulative Malatesta, his dark voice pairing beautifully with the other principals as his character schemed to outwit Pasquale. His patter duet with Lepore was encored. David Portillo as Ernesto was an ardent suitor, at first in despair at what he believed to be the loss of Norina but then a willing co-conspirator. His serenade to Norina was gorgeous, and his voice glowed warmly in the love-duet. Humorous touches were added by Robert Watson as the fake notary. Pasquale’s colorfully costumed servants added to the chaotic atmosphere that – along with Norina’s extravagant spending – drove him to distraction.

Allen Moyer’s scenery and costumes were attractive, and Fenlon Lamb’s direction energetic. Doug Provost’s lighting was effective in conveying changes of mood, most notably when Norina strikes Pasquale, the dimming emphasizing the transition from their shouting match into something more somber.

Antonino Fogliani led a bright account of the Overture and provided able support, maintaining ideal balance with the singers. His tempos were propulsive much of the time, but gentler in lyrical passages. There were notable contributions on horn and trumpet.