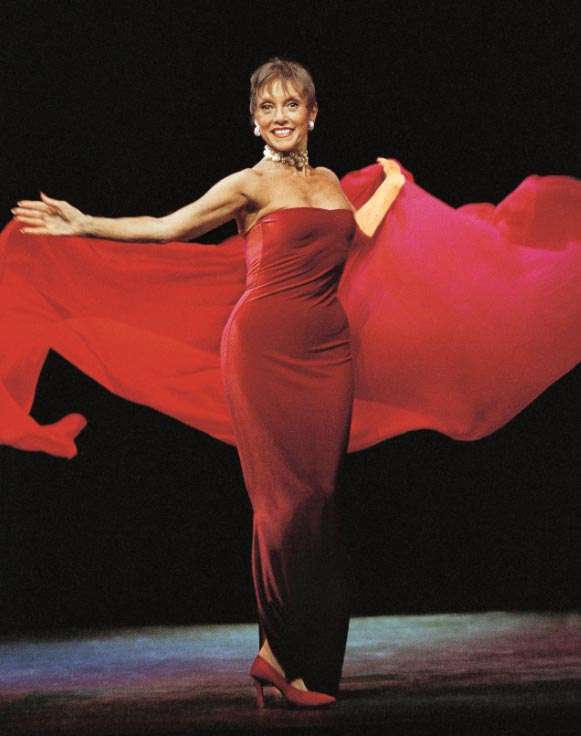 The supreme French cabaret artiste Liliane Montevecchi is back in London, appearing for the first time at The Crazy Coqs, the perfect setting for the her, gowned in chic black, to perform her irresistible programme of songs and anecdotes, the latter punctuated by her trademark guttural laughs. Montevecchi, who started her career as a prima ballerina with Roland Petit’s company, won a Tony award as best supporting actress for her Broadway appearance in Nine, entranced London with her portrayal of the world-weary dancer in Grand Hotel, and appeared in several films of the 1950s with such as Marlon Brando (The Young Lions), Elvis Presley (King Creole) and Stewart Granger (Moonfleet), and took part in the ’Frankie and Johnny’ ballet alongside Cyd Charisse in Meet Me in Las Vegas.

Born in Paris, her extensive credits also include La Plume de ma Tante and the Folies Bergère, and her affection for the city of lights is almost palpable in her loving song-selection which includes Cole Porter’s ‘You don’t know Paree’ and ‘I love Paris’. She pays tribute to the French icons Josephine Baker, Edith Piaf and Mistinguett with persuasive reminders of ‘J’ai deux amours’, ‘La vie en rose’ and ‘Mon homme’ respectively, and adds a second Mistinguett number, ‘Je cherche un millionaire’, patrolling the room in her mischievous quest. Her infectious sense of humour is also evident in the risibly suggestive ‘A newfangled tango’, introduced by Ethel Merman in the show Happy Hunting and often featured by Lena Horne, and Stephen Sondheim’s ‘I never do anything twice’, launched by the French chanteuse Regine in the film The Seven Per Cent Solution. Throughout, Montevecchi is given sterling support by her highly talented pianist, Nathan Martin.

Her commanding rapport with the audience is such that she had the whole room humming with her by the time she reached her third number, Cole Porter’s ‘Si vous aimez les poitrines’. Though there are some touchingly reflective moments with such tender ballads as ‘When the world was young’, ‘Just a gigolo’ and ‘Autumn leaves’, showstoppers are plentiful, such as the title from the stage hit, Irma la Douce, Jerry Herman’s assertive ‘I don’t want to know’, from Dear World, Charles Aznavour & Jeff Davis’s ‘Le temps’ and the number written especially for her in Nine, ‘Folies Bergère’.

Montevecchi confesses she would like to have starred in the musical version of Sunset Boulevard, which one can only imagine, but at Crazy Coqs she demonstrates that she is the indisputable queen of cabaret with a stunning display of pin-point timing and captivating melody.