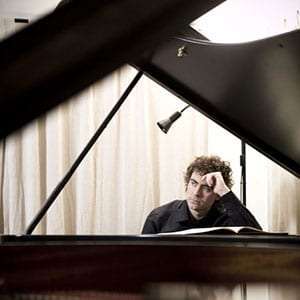 Paul Lewis opened his recital solemnly and deeply transporting, the gentlest of touches and the subtlest of responses sympathetically sounding Busoni’s modernising of J. S. Bach. Lewis then held silence to launch the first of Beethoven’s quasi una fantasia Sonatas (collected as Opus 27), given with thoughtful poise and exploration, not flinching from rougher contrasts and the music’s mercurial moods – from song to fleeting humour – gratefully embraced and displayed through a wide dynamic range (never crudely overload though) and a variety of response to match Beethoven’s quixotic invention.

For his second gambit of Bach and Beethoven, Lewis’s superfine sensitivity of the former became a musical ‘last rite’, segueing neatly into the opening movement of the ‘Moonlight’ Sonata, dreamy, rarefied and sotto voce (not a full moon), hypnotically modulated. From there to the gentle spring of the second movement, the calm before the storm, the tempestuous finale (great ‘chase’ music for a silent movie!) found Lewis as a rapacious deliverer of the notes, but always musically lucid, although it was a shame to lose the repeat of the second half.

Lewis does a good line in connections, opening his recital’s second half with three pieces of ‘late’ Liszt that included the turbulent waters and obsessive figuration of Schlaflos, Frage und Antwort (Sleepless, Question and Answer), the stern utterances, torment, demonism and benediction of Unstern! (Liszt’s self-described “bitterness of heart”) and the Venetian farewell for the just-dead Richard Wagner – spare, numbed, tragic – perfect scene-setters and -shifters, and also with an uninterrupted passage into Pictures at an Exhibition.

While commanding an extensive palette of colour but not playing to the gallery, Lewis’s commitment, focus and insight kept at bay the numerous arrangements this suite has been subjected to – Ravel’s orchestration being by far the best known. It’s easy to forget that the maverick Mussorgsky was content to transfer Viktor Hartmann’s drawings, designs and paintings to the piano, however idiosyncratic the writing may be. Lewis didn’t hang around in the ‘Promenades’, the opening suggesting the spectator as particularly eager to see what’s on offer, until stopped in his tracks by the gawky ‘Gnomus’, grotesquely contorted here. By contrast ‘The Old Castle’ flowed and was magically hushed. Other highlights included a weightily determined ‘Bydlo’ (oxen-pulled cart), a dashing and chipper ‘Ballet of the Unhatched Chicks, a rat-a-tat ‘Market Place at Limoges’, a sacredly spacious ‘Catacombs’, a scorching ‘Hut on Fowl’s Legs’ and a ‘Great Gate of Kiev’ that was majestic and interior, bit by bit tolling to triumph.

For a single encore Lewis returned to Liszt “to help people breathe out, especially me”. Thus the short and sweet Klavierstück in F sharp was played with refinement and the satisfaction of a concert well done.