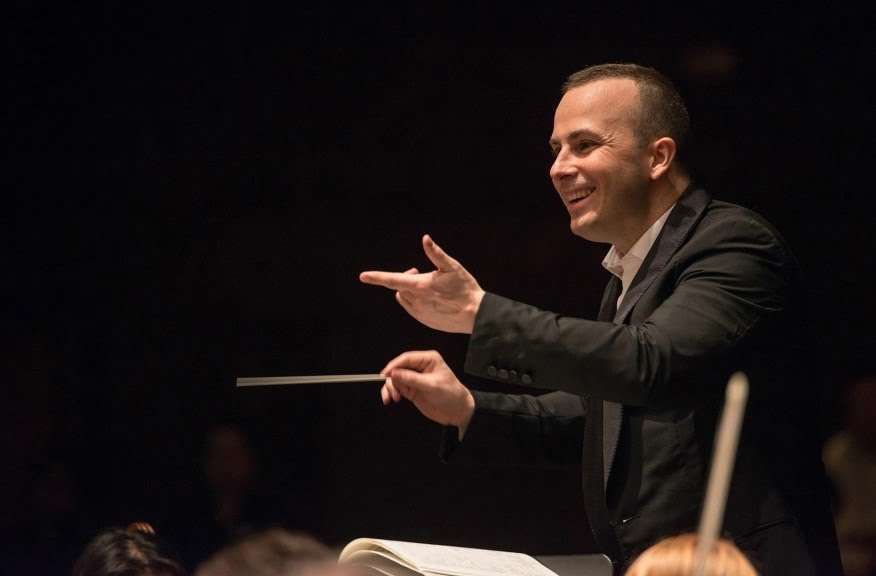 Tod Machover’s Philadelphia Voices, in its New York premiere, is a truly contemporary work catering to today’s audiences who crave the familiar over the artistic. Not to say that this spectacular mélange for voices, orchestra and taped material garnered from Philadelphians themselves, is not musically creative but its focus is clearly to connect more with a wider audience. In Philadelphia Voices, Machover pieces together spoken material collected from thousands of Philadelphians and intersperses it with poetry and conversation sung by a vast chorus that combines contemporary melodic stylistic qualities with sometimes dense contrapuntal passages. The texts contributed by “folks like us” are strung together to celebrate aspects of Philadelphia that are enjoyed most by those who live and work there.

Machover’s background in both music and technology positions him to creatively integrate these two disciplines in a manner that audiences may find most intriguing. A graduate of the Juilliard School in New York, where he studied with such important composers and teachers as Elliott Carter and Roger Sessions, Machover became composer-in-residence to Pierre Boulez in 1978 at the then newly formed IRCAM in Paris. Machover’s interest in utilizing technological resources in musical composition took root, resulting in his joining the faculty of MIT at its new Media Laboratory.

Philadelphia Voices is the latest composition in Machover’s project called “city symphonies”. It is not surprising that this project alone has done wonders to enhance his reputation as the composer “wired into technology.” His efforts to explore local history from the ground up by an outreach approach that involves the people who identify with the city in which they live, has gone a long way to democratizing art music. He attempts to integrate the classical with everyday elements that are identified with the cities he celebrates, such as the sound of a sizzling Philly steak and the deafening cheers that accompanied the victory of the Philadelphia Eagles in the last Superbowl. Artificial, perhaps, but nonetheless it resonates with young audiences.

Philadelphia Voices consists of seven sections played without a break. This closing Hymn contains the underlying philosophy of the work, a vision of an idyllic future when the City of Brotherly Love will renew the meaning of its epithet and expand it to all people who reside within its boundaries. A noble sentiment. The combined choral forces made every effort to communicate the fervor of the texts with heartfelt enthusiasm, and supertitles were most helpful in this respect. Frequently dense counterpoint made clarity difficult to achieve, but for the most part the singers performed admirably. Yannick Nézet-Séguin infused the piece with much energy, intensity and drama, and generated a taut, vital performance that made every effort to be larger than life.

One of Leonard Bernstein’s masterpieces, Chichester Psalms, opened the concert. With a strong emphasis on sonic power, heavenly serenity and propulsive energy, Nézet-Séguin led a most impressive performance. In the first movement, powerful sections were aggressive, softer ones sparkled with shimmering filigree. The second part, based mostly upon the text of Psalm XXIII, featured Dante Michael DiMaio. Although he sounded rather sheepish, his voice was clear and resonant, and his shyness (if that’s what it was) fitted in well with the character of the young David as he sat in the field praying to his Lord. His tender expressions were countered by the violent intrusion of the chorus on the words “Why do the nations rage?” Vibrant strings began the final section with scorching harmonies that thrust out against calmer strains of wistful melody. A lovely cello duet and a beautifully sung offstage vocal quartet enhanced the performance.

The familiar Ravel orchestration of Mussorgsky’s Pictures at an Exhibition gave the Philadelphia Orchestra a chance to show how its once-famous timbre has at last returned. Although the Philadelphia sound created by Stokowski and maintained by Ormandy will probably never quite be duplicated, the Orchestra on this occasion played brilliantly. Special mention should be given to alto saxophonist Sam Caviezel for the purity of his tone, and tuba-player Carol Jantsch for her excellent solo in the lumbering ‘Bydlo’. Nézet-Séguin led a rather brisk treatment of the ‘Gnomes’ segment, but forceful outbursts followed by eerie stillness produced a chilling effect. A well-shaped ‘Old Castle’ generated a haunting atmosphere, yet elsewhere there was some hurry although concentration on impressionistic elements was quite fascinating. Nézet-Séguin heightened the contrast between the rapid, almost chaotic depiction of ‘Unhatched Chicks’ and the ‘Limoges’ marketplace (an interesting parallel) against the dark, foreboding caricature of Samuel Goldenberg. The characterization of Goldenberg’s cowering amanuensis Schmuyle by a mousey trumpet was mawkishly coy. The lugubrious ‘Catacombs’ was especially frightening, while the ‘Baba-Yaga’ section was simply riveting. Brilliant brass garnished the concluding ‘Great Gate of Kiev’, even if the bells (marked fff) were rather too withdrawn to fully engender the grandiosity of this magnificent conclusion.