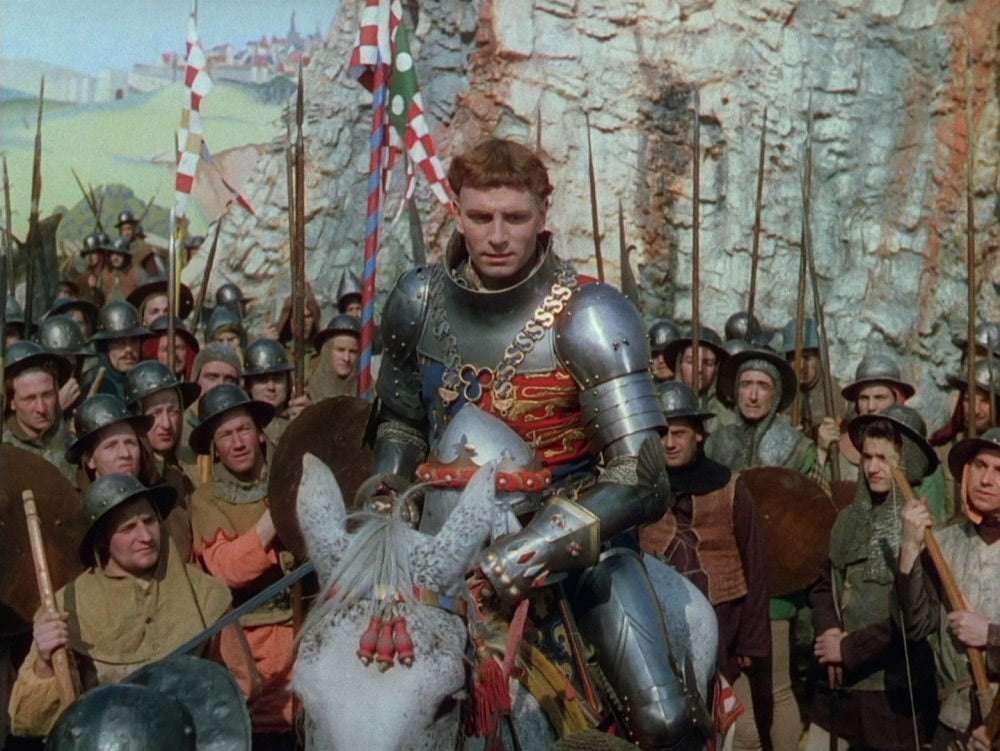 Laurence Olivier’s Henry V is a film very much of its time and place. Made in 1944 it is a rousing propaganda film that also set new standards for Shakespearean adaptation. A major factor in its success was the fusion between film and music, and William Walton’s score was justly praised at the time. The Philharmonia and the Crouch End Festival Chorus conducted by Frank Strobel gave Walton’s score in a complete new version for live performance, painstakingly put together by Gill Kay and Dominic Sewell.

The film was released at the time of the Allied invasion of Normandy, and was made with explicitly propagandist purposes. It opens with a dedication to those fighting the war and it is a bold, clear reading of Shakespeare’s play that invites parallels with events of the day. Olivier’s Henry V is a decisive charismatic leader who shares the dangers of war with his men. The text is carefully pruned to remove anything – such as Henry authorising the cutting of the throats of French prisoners at Agincourt – that could be construed as critical of the nation’s leader. The film also views the French relatively sympathetically, and Shakespeare’s text is cut to modify the frivolity of the French court with only the Dauphin (Max Adrian) emerging as vain and cowardly.

It was Olivier’s first film as director and he revels in the thrill of a new medium. The film opens with a playbill drifting in the wind and a long aerial shot that travels above a model of Elizabethan London before coming to rest at Shakespeare’s Globe Theatre. The film is highly stylised throughout with the Globe and its audience meticulously created. It becomes a play within a play as it opens out to Southampton and then a dynamic shot on the beach in France with Henry and his troops unloading cannon and other weaponry. Henry delivers “ Once more unto the breach” on horseback as his horse weaves in and out of the troops before they charge into battle. The famous battle of Agincourt, from initial fluttering pennants to final desolation, has great dramatic drive with sweeping tracking shots and brilliant editing and was clearly influenced by the Battle on the Ice in Sergei Eisenstein’s Alexander Nevsky (1938). Visually, the film is often modelled on the late Medieval Book of the Hours of the Duc de Berri, especially the scenes at the French court. The use of Technicolour is stunning, and the design team of Paul Sheriff, Roger Furse and Carmen Dillon set new standards for this type of adaptation. Yet it is also a film of small moments – the actor (Olivier) clears his throat to play the King at the Globe, Princess Katherine (Renée Asherson) glances playfully at her maid when Henry begins his courtship of her – that have considerable charm. Not everything works – some of the humour is laboured and the”Little Touch of Harry in the Night” sequence seems overlong – but it is still a remarkable first film. 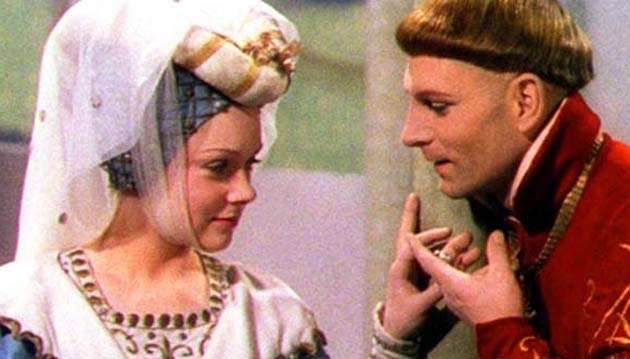 The performances fit the director’s conception perfectly. Olivier’s icily handsome Henry, whilst a relatively uncomplicated hero to meet the propaganda imperative, is noble and decisive. His diction is exemplary even at his most operatic moments. Asherson’s lovely Princess Katherine of France suggests she is more knowing than she outwardly appears. Leslie Banks is a velvet-tongued Chorus. The supporting cast offers a gallery of fruity and full-bodied performances, such as Robert Newton’s Ancient Pistol, and the great music hall star George Robey has a memorable few moments as Falstaff. Esmond Knight who had been severely wounded in the Battle of the Denmark Strait in 1941 plays the fiery Fluellen. Much of it may be acting styles from another era but it suits the film perfectly.

Walton’s score is eclectic and dramatically effective, especially when heard live. The exhilarating opening and closing choruses were rousingly performed by the Crouch End Festival Chorus, and the Philharmonia played well, although sometimes the weight of the orchestra obscured the speech track. Walton sought to create a sense of period by referencing tunes from the Fitzwilliam Virginal Book for the scenes at the Globe. Two of the finest moments in the score follow one another as the Death of Falstaff and “Touch Her Soft Lips and Part” give an elegiac quality to the death scene with fine playing from the Philharmonia strings. The influence of Prokofiev’s Alexander Nevsky is never far away, from the Battle Music with the similar threatening and slowly accelerating rhythmic accompaniment for the cavalry charge, lacerating brass and chaotic percussion. The historically contemporaneous Agincourt Carol (suggested to Walton by Vaughan Williams) is heard as Henry names the battle after the nearby castle of Agincourt and the troops walk in slow procession to the village. Walton uses one of Joseph Canteloube’s Chants d’Auvergne to accompany the peace-making speech of the Duke of Burgundy (Valentine Dyall) at the French Court and the Philharmonia woodwind and strings were particularly touching at this point. The final return of the Overture, the Agincourt Carol and the Spirit of England theme closed the film in thrilling style, and Frank Strobel ensured totally committed playing and singing throughout.