Bartók
Concerto for Two Pianos, Percussion and Orchestra
Mahler
Symphony No.6 in A-minor

Like the proverbial London omnibus, you wait for a performance of Mahler’s Sixth Symphony (the last live one I heard was Andris Nelsons’s Boston account at the 2015 Proms) and then three come along almost at once (LSO/Rattle, NHK/Paavo Järvi, and this Salonen – with the Vienna Philharmonic and Harding lined up for the Proms). Much rarer is Bartók’s Concerto for Two Pianos, Percussion and Orchestra – so too in its original Sonata format.

Along with Esa-Pekka Salonen, this four-concert Philharmonia Orchestra series, Inspirations, has also featured Pierre-Laurent Aimard, sharing the platform here with his wife Tamara Stefanovich, who took the first piano part, with Aimard to Salonen’s right, the two lidless Steinways nestled together in front of the podium with the two percussion stations directly behind. Two of Aimard’s fellow-Frenchman were the percussionists, the Orchestra’s recently appointed timpanist, Antoine Siguré and guest Emmanuel Curt.

The Concerto has a crepuscular opening, the pianos crawling out of the depths with sudden cymbal outbursts, before stamping ominously as if stretching their limbs before pounding into the Allegro molto, when an orchestral tutti makes its first mark. Stefanovich’s flashes of inspiration matched her red dress, while Aimard, leaning close over the keyboard, was a study in concentration. The mysterious aphorisms of the slow movement, a hushed nocturne with muffled interruptions, with eerie string, then pianistic glissandos, was brushed aside by the orchestra leaping to its chance of opening the Finale, together with Stefanovich and Aimard in upbeat semiquaver runs. From then on it’s a folk-inspired dash to the finish, even if Bartók allows the piece to die surreptitiously away. With the four soloists so tightly knit, there was a nice symbiosis between Siguré and Curt, handing beaters to each other and rapidly taking over on shared instruments; a visual representation of the performance’s cohesiveness. 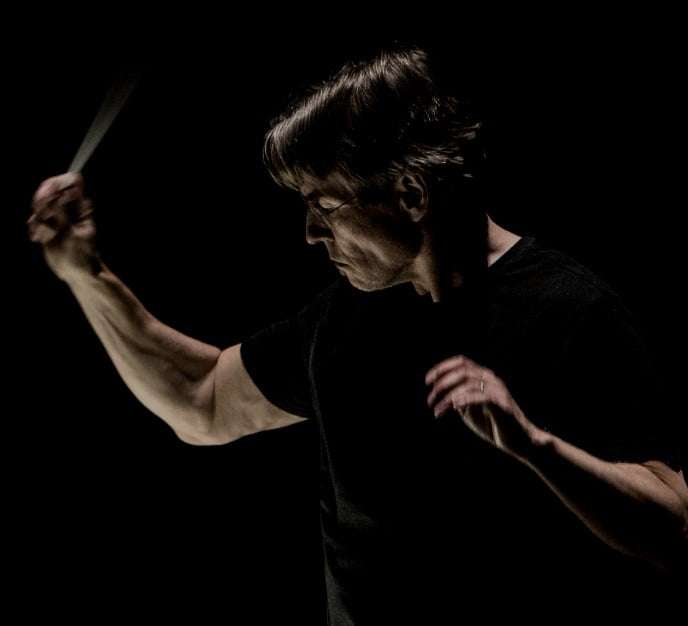 In Mahler’s Sixth Symphony, Salonen – looking younger than ever, and attired in his new take on a tail-coat – dived straight in, almost before standing on the podium. The Philharmonia responded magnificently, propelling the opening march with a dogged insistence that foreshadows the ‘tragic’ Finale. Salonen favours Scherzo second (though not segueing straight into it) and Andante third, although the orchestral parts (Kalmus) have the movements the other way round. And – just like Rattle and Järvi – Salonen veers on the side of caution with only two hammer-blows (given here with shattering sudden intensity).

Amidst the hue and cry when Mahler utilises all his forces, it was the quieter moments that perhaps impressed more – Jill Crowther’s aching cor anglais solo above a bed of clarinets and flutes, or the rising horn interjections by Nigel Black. Three percussionists manhandled the cowbells to natural effect, with their off-stage counterparts, including some rather high-pitched bells, perhaps too quiet in the final movement.

A curious hiatus at the beginning of the Scherzo notwithstanding (Salonen having to wait, arms raised, having given the upbeat before Siguré’s opening timpani beat was struck), this was an thrilling and engrossing reading, orchestral virtuosity perhaps overshadowing the catastrophe of the Finale. And in spite of the Symphony’s length, Salonen looked as fresh at the end as at the beginning. If only the audience had withheld the cheers for a few more seconds – those people that jumped in vocally had not spared a thought to the meaning of Mahler’s music.

The Philharmonia now sets off on a Taiwan/Japan tour, with Mahler’s Sixth Symphony twice in Tokyo coupled with the Japanese premiere of Stravinsky’s Funeral Song.