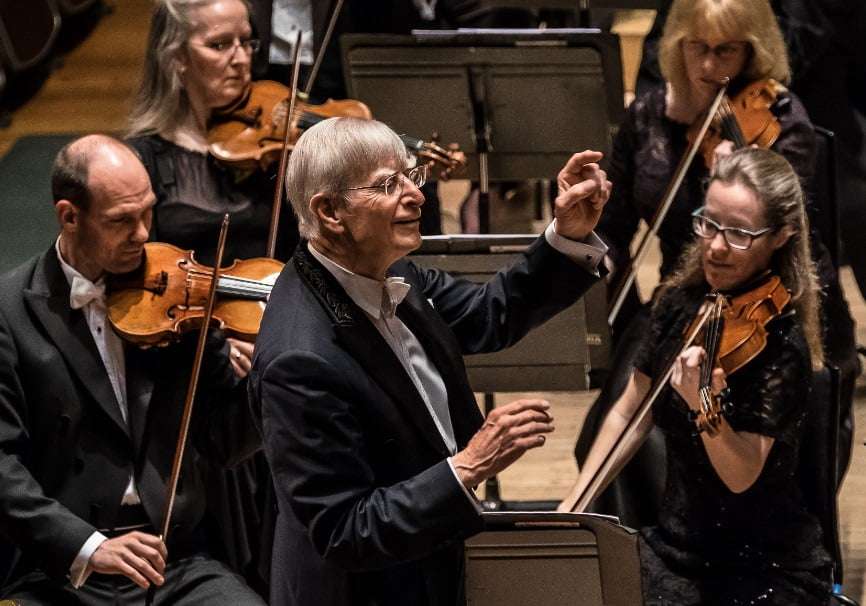 Herbert Blomstedt, on the cusp of turning 89 (July 11), closely associated with the orchestras of San Francisco, Bamberg and the Leipzig Gewandhaus, and who has recently been conducting in Berlin, Cleveland and Boston, is too infrequent a visitor to London, although he is at the Proms this year and returns to the Philharmonia Orchestra next season (even if both appearances include Beethoven 7, a regrettable duplication).

A tall, imposing man belying his years (knock ten years off), Blomstedt opened this Royal Festival Hall concert with a spirited account of Mozart 39, the Adagio introduction purposeful, enlivened by hard-stick, rat-a-tat ‘period’ timpani. The Allegro was quick-fire but not rushed, time allowed for lyrical asides. Balances and blends were transparent, the foundation being four (left-positioned) double basses. Blomstedt – podium-less, without baton, and with his score remaining closed – wasn’t one to indulge, although the slow movement, even if marked Andante con moto, would usefully have enjoyed more breathing space; nevertheless, contrasts of volume were always ear-tweaking and the music had its share of soul and emotionalism. The Minuet was vigorous, the Trio bubbling along, Mark van de Wiel’s shapely clarinet to the fore, and with the return of the Minuet we went twice-through it again. Blomstedt’s generosity with repeats was notable, and included a reprise of the Finale’s second half; worth it for the initial shock-value alone. Blomstedt’s was a speedy view of the last movement and also rhythmically inveigling to close an outing that was smiling and sophisticated, dynamic and dancing.

Whether Blomstedt (born in the States to Swedish parents) has conducted the Philharmonia since their Bruckner 8 at the 2006 Edinburgh Festival I know not (I cannot recall anything in London from them), but his Bruckner credentials have long been established through recordings and this account of the ‘Romantic’ Symphony was magnificent, save for too loud (if intentionally substantial) brass, even when Bruckner’s requirements were adhered to, for here were six horns (the orchestration calls for four) and four each of trumpets and trombones (three of each). Most of the time it was for reasons of load-sharing, but when in consort the mighty heave of fifteen brass-players (including tuba) was close to painful; trumpets could be strident. But the strings were still to be heard, and there was many good reasons heard for Blomstedt’s use of antiphonal violins, while the double bass line, not least when plucked, was particularly potent. 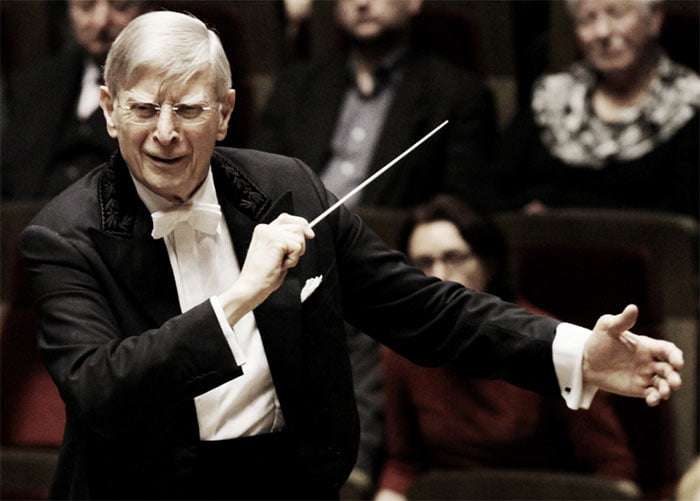 However, now with a rostrum (stick and score details as before), Blomstedt’s reading of the ‘Romantic’ Symphony was a masterclass of Bruckner interpretation, totally convincing and begun on the barest of pianissimos to which Katy Woolley, following a bad-luck first note, floated a quite lovely horn solo, and her duet later with Samuel Coles’s golden flute was a rapt moment. Blomstedt’s view of the first movement was both structurally integrated and expressively yielding. Notable also was the really quiet playing that took us into Bruckner’s inner sanctum.

The middle movements were especially fine, the slow one suitably sepulchral and of sombre tread, the violas sounding wonderful, not least in those passages when otherwise it’s all pizzicato. The Scherzo was majestic, it cantered agreeably and hunted royally and the Trio was a beguiling serenade that was made belonging to its weighty surrounds. From mystery to mountain-climbing via lilting gait, in the Finale Blomstedt and the Philharmonia were at-one in this walk in the country during which breathtaking images are created, and here they tantalised the senses. A passage pared-down to somewhere around pppp was utterly spellbinding. The uplifting coda, awed, broad and triumphant, clinched a momentous deal.

Loudness aside, this was music-making of the highest order, Blomstedt an energised and mercurial figure on the floor and on the rostrum, both performances fastidiously prepared and closely observed yet also spontaneous. The Philharmonia’s dedicated playing left in no doubt the players’ admiration for its guest maestro. This was a very happy reunion. Blomstedt and the Philharmonia are now off on a short tour of Spain. Viva!