Mozart
Piano Concerto No.20 in D minor, K466
Mahler
Symphony No.1 in D 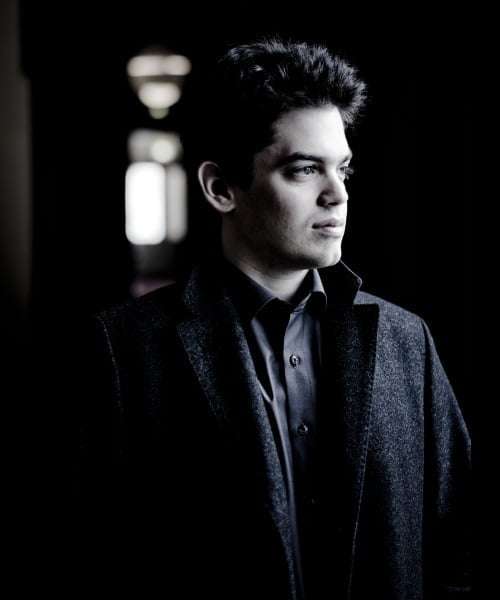 Lahav Shani was born in Tel Aviv in 1989. In 2013 he took First Prize at the Bamberg Symphony Orchestra’s Gustav Mahler International Conducting Competition. He has since replaced Gustavo Dudamel and Michael Gielen at concerts and now has numerous international appearances in his diary. Shani includes Daniel Barenboim among his mentors, and he has a particularly strong relationship with the Israel Philharmonic – in 2007 he appeared as piano soloist with Zubin Mehta conducting, and has since assisted Mehta and he also played double bass in the Orchestra, and more recently has conducted the IPO in his own right.

Music by Mozart and Mahler hallmarked Lahav Shani’s debut with the Philharmonia (Maya Iwabuchi leading, and thus rolling back the years in terms of the Orchestra’s history).

In K466 Shani’s piano was nestled into the string-players (with the keyboard facing the Stalls), the violins antiphonal (twelve firsts), and with four double basses positioned to the left. It was a good blend of weight and clarity. Shani stood to conduct and deftly seated himself to play. If not the most turbulent account of this minor-key Concerto, it was wonderfully musical, Shani ‘first among equals’. His contribution was subtle, with nothing forced; understated, yes, but full of character, and he has a particularly agile left-hand.

The Philharmonia chugged along animatedly and there were some especially beguiling woodwind contributions. In the outer-movements Shani chose Beethoven’s peerless cadenzas and in doing so opened up his volume and tone – an acknowledgement of Beethoven’s additives to the piece. The second-movement ‘Romanze’ flowed with poetry and the agitation of the middle section once again found Shani accommodating his colleagues without denuding drama. The Finale, although nippy, didn’t lack for poise. It was a real team-effort, and if Shani was his own double-act, he was also singularly impressive.

The Mahler opened up a few cracks. For all that Shani was now using a baton, there were moments throughout the Symphony when entries and ensemble were smudged, not least the very opening. Yet that introduction was also a gentle, rainbow-coloured, slow-raising dawn (the off-stage brass was ‘just right’ in terms of perspective, while sadly someone’s ringing mobile was ‘just wrong’). The exposition (repeated) was also leisurely, if flexible. Things did get a bit sleepy at the mid-point though, but there was no doubt that an imaginative musician was at work. At times Shani seemed content to let the music play itself – a very responsive Philharmonia obliged – at others there were personal touches, most of which convinced. Detailing and dynamics were well catered for and balances were generally well judged.

The Scherzo managed to be pesante and jocular, although the Trio might have had a little more dance-like current. The ‘Frère Jacques’ third movement benefited from Tim Gibbs’s sinister double bass solo, the music’s raucous and radiant ingredients mixed as one. There was no doubting the stormy power of the Finale – rapid-fire – but the movement overall became somewhat shapeless given it was really fast and then really slow, with that formula then continued, although you could have heard the proverbial pin drop in the quietest moments.

From such contrasts, and a couple of diversions, Shani built a very powerful conclusion, louder than anything prior to it, if a bit too much into the red area. But it could be argued that he had the discretion to keep something in reserve. A shame though that he was tempted (as other conductors have been) to add a crude timpani stroke to the final chord: it detracted

However, as an exemplar of a young man conducting a young man’s Symphony, then, if not consistent and leaving some doubts, Shani displayed much sensitivity and also created a spectacular that brought the house down.

At the end of Mahler 1, the eight horn-players stand (as directed by the composer) to emblazon the Symphony’s triumph, and they were superb. There was extra poignancy on this occasion: “The Horn section of the Philharmonia would like to dedicate this evening’s concert to the memory of their dear friend and colleague Chris Davies, who passed away this Tuesday morning, 2nd of February. He will be sorely missed by all who were lucky enough to have the pleasure of his company, his friendship and his musicianship. Rest in peace (1962-2016).” Mr Davies was a member of the Orchestra of the Royal Opera House.