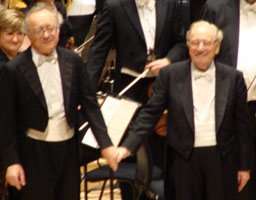 Should you find yourself at a musical quiz-night and a question is posed as to the final music played in London by Alfred Brendel, then the answer is Bach’s Nun komm der Heiden Heiland, as transcribed by Busoni, offered as an encore to a sustained standing ovation following the Mozart; as sublime a leave-taking as can be imagined.

Not that Brendel was seeking a special occasion – after all, his appearance was as part of a ‘normal’ concert and although he was playing one of his signature composers, rather than opt for Mozart’s final piano concerto (K595), Brendel chose the youthful E flat work and brought to its outer movements a sparkle and vivacity that avoided any ‘last word’ tag. This made the middle movement all that more poignant in its visionary pathos and the minuet that interpolates the finale was richly expressed.

As ever, however significant this performance might have been in terms of Brendel’s ‘farewell to London’, the music was the only thing that mattered and was perceptively illuminated. In this he was sensitively accompanied by the Philharmonia Orchestra and Sir Charles Mackerras, one of Brendel’s closest collaborators.

Sir Charles had the string-players of the Philharmonia on the march for this concert. Violins were antiphonal for Haydn and Dvořák, and together (surprisingly) for the concerto, while the double basses were to the left for Haydn, to the right for Mozart, and along the back of the platform for Dvořák.

Haydn’s last ‘London’ symphony (the only one of the 12 to be so named) opened proudly (without undue rhetoric), the non-vibrato strings adding mystery to the slow introduction; then the allegro was elegantly introduced and enjoyed the vivid presence of ‘authentic’ trumpets and drums. This was a performance of affection and variegation, graceful and vigorous as required (the Minuet certainly didn’t hang around!) and the finale captured well a sense of valediction and summation.

After the interval, Alfred Brendel (who retires from the concert platform at the end of this year) joined the audience for the Dvořák and seemed to delight in the exuberant performance, one that enjoyed Mackerras’s ‘native’ insights as to inflexion in a flexible reading, both mellow and fiery. The slow movement was especially expressive and contrasted, magically hushed at one point, and if the finale was curiously reined-in in terms of both tempo and temperament (horn trills subdued) there was also a strength of purpose that built to an ebullient coda.

Should that quiz-night further enquire as to where Brendel gave his ultimate appearance in the UK (Vienna marks the ultimate ultimate!), then the answer is found below!