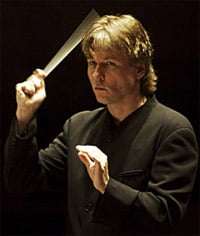 It was unfortunate that Esa-Pekka Salonen’s inaugural concert as Principal Conductor of the Philharmonia Orchestra was marred by the sort of technical issue you can bet he never encountered at the Los Angeles Philharmonic’s swanky Walt Disney Hall: a squeaky podium. A dynamic conductor, Salonen’s energetic movements were accompanied throughout by an obtrusive squeak from the floorboards of his rostrum – especially pronounced in the more furious passages (i.e. pretty much all of The Miraculous Mandarin).

Before a single note (or squeak) had sounded, Salonen had to readjust the height of his music stand, dissipating the pre-music tension and dampening the impact of the Suite’s electrifying opening. Once underway there was much to admire in the ferocity with which the Philharmonia attacked Bartók’s gritty, angular writing. Salonen couldn’t quite maintain the fever-pitch tension throughout, and there were some suspect moments of wind and brass tuning; but the final chase was truly thrilling, the players giving their all (a special medal for trombonists Byron Fulcher and Daniel Scott for their dervish-like contribution). 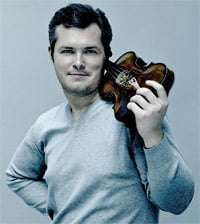 Vadim Repin gave an uneven, often disengaged, account of Prokofiev’s Second Violin Concerto. The almost perfunctory way he began deprived the opening of its darkness and mystery: for all its surface urbanity, Prokofiev needs more grit than this. Repin displayed great sensitivity and beauty of tone in the lyrical passages, with able orchestral support, especially from richly sonorous cellos and double basses.

The exquisite neo-romanticism of the central Andante should not be over-indulged but Repin’s near-nonchalance was too cool for its own good, and there was little sense of poise in the accompaniment. The more animated interlude had character, but was spoilt by an unaccountably raucous clarinet solo (presumably at Salonen’s request). Repin put his back into the finale, resulting in a terrific swagger, and the lively dance-like passages had great intensity; but the side drum and castanets were consistently behind the beat. Fortunately the tribal bass drum was spot-on.

Stravinsky’s opera-oratorio (the composer’s description) “Oedipus rex” fared better. Theatrical lighting (by Philip Gladwell) – or, rather, general lack of it – created a dramatic atmosphere, and the eerie glow from the white pages of the chorus scores was particularly effective (though the light from the bare bulbs of the conductor’s lamp shining directly into the audience was constantly distracting).

The male chorus made the most impressive contribution to the performance, the tone of the professional Philharmonia Voices superbly strong and muscular, with exemplary diction – a crucial aspect of the effect Stravinsky was striving to create. After the spoken introduction (delivered with aplomb and suitable gravitas by Simon Russell Beale) the powerful tutti was truly chilling, leaving no doubt that this tale would not end happily.

Stephen Gould gave a monumental account of the title role, his stridency well-suited to the tragic work. The supporting cast were less consistent, their voices not always carrying across the orchestra (due in part to their heads being buried in the score); but rich-voiced Ekaterina Gubanova gave a commanding (score-free) performance of Oedipus’s ill-fated mother/wife Jocasta.