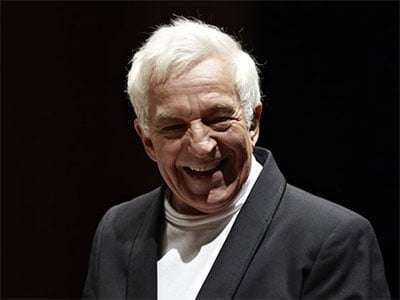 Here was dance and a visit to the cinema – courtesy of Prokofiev, the Philharmonia Orchestra and Vladimir Ashkenazy. True, Scythian Suite, first heard in 1915, is a concert-hall work, but its origins are from sketches for an unfulfilled ballet score, Ala and Lolli. Prokofiev wisely saved some terrific music and laid it out for a large orchestra with consummate skill. Owing not a little to the recently unleashed Rite of Spring, Scythian Suite is brazen and tumultuous and also eerily enchanted with the mysteries of night. Ashkenazy and the Philharmonia did the music proud in this well-prepared, well-executed account, brimful of thrills, incident and atmosphere, undoubtedly aided by the orchestra (once again, see Maazel links below) not being positioned on risers, balance and tone much improved. Ashkenazy set a spanking space for ‘Dance of the Evil Spirits’, athletically played, the Philharmonia elsewhere hypersensitive to the wisps of sound that punctuate the hours of darkness and opening up the glaring brightness of the sun as a relentless parade to conclude the Suite, such persistence conversely referred to as “frozen chords” by Pierre Boulez regarding the only Prokofiev work the Frenchman conducts. Ashkenazy, on the other hand, is a consistent champion (as pianist and conductor) of his countryman; here, his control of the music, and his variegation of it, made for 20 very special minutes.

The so-called “Scenes from Ivan the Terrible” was also a great success, if something not envisaged by film-director or composer. Sergei Eisenstein’s ambitious plan was to make three movies about the life of Tsar Ivan IV (aka Ivan the Terrible, 1530-1584). Two were completed – the first released in 1945, the second suppressed by the Soviet authorities until 1958, and the third only reached a reel or two (Eisenstein died in 1948 at the age of 50). Similarly for this director’s film of Alexander Nevsky, Prokofiev wrote the music, but, unlike for that previous assignment, the composer did not fashion a concert-work from his score, although he did re-use some of it, for the ballet The Stone Flower and for the opera War and Peace. It was left to Abram 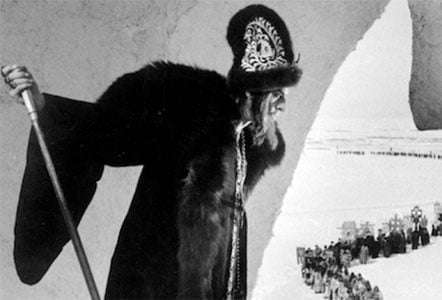 Stasevich, who conducted the soundtracks of the Ivan films, to concoct an oratorio that was first heard in 1961, several years after Prokofiev’s death. Stasevich (1906-71) made a commercial recording of his Ivan creation and the work was entered into Prokofiev’s catalogue as Opus 116a, and requires a narrator. There are later editions by Michael Lankaster (recorded by Rostropovich) and Christopher Palmer, the latter omitting speech. As an aside, the Philharmonia has quite a history with Ivan the Terrible, having recorded the Stasevich score with Riccardo Muti – their first concert outing was an amazing evening – and the Palmer with Neeme Järvi.

William D. Brohn’s adaptation uses Stasevich’s work as a basis, dropping the orator and inserting at the very beginning an a cappella setting of “God Save the Tsar!” (a tune probably best-known from the 1812 Overture). It was good to see the film’s Cyrillic credits first of all (subtitled, as were the other visual selections) and successive Scenes – whether coronation, wedding, intrigue, confrontation, treachery – all lead to an invincible and united Russia, Ivan’s ambition. If the acting is somewhat melodramatic, this is intriguing film-making, sometimes employing thousands of extras (no graphics here!), vividly documenting if stylising historical events, Prokofiev’s music integral to the motion picture while aurally illuminating it. Ancient celluloid (skilfully re-mastered) and live musicians connected well, Ashkenazy holding things together with discreet mastery. Although neither vocal soloist had much to do, Lilli Paasikivi was intensely eloquent and Nathan Berg an uninhibited ringmaster, driving on a male-only bacchanal (taken from film two and shot in colour). The diverse chorus members came together as-one and contributed impressively across the music’s range (including chanting), and the Philharmonia Orchestra continued to play with precision, polish and eagerness. Condensed and abridged as the excerpts were, what we saw of the films seemed just right, Prokofiev’s score (however arranged and adapted) still able to stand tall and be returned to its original role as a genuine collaboration with Eisenstein’s vision, ending with a rousing paean of praise to Russia as a whole.