Prokofiev
Seven, They Are Seven, Op.30*
Violin Concerto No.1 in D, Op.19
Cantata for the Twentieth Anniversary of the October Revolution, Op.74*

[sung in Russian, with English surtitles]* 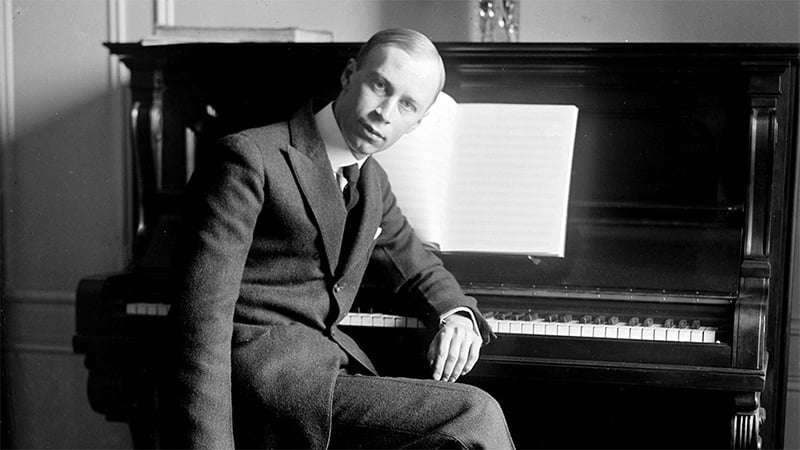 Bringing to a close his 1917 Russian Revolution series Vladimir Ashkenazy turned back to Prokofiev. All three works had delayed premieres. The earliest, the sweetly, lovingly lyrical First Violin Concerto was composed between 1913 and the Revolutionary year itself, and it was the tumult that ensued that scotched any thought of programming it then. It was first heard six years later, in Paris.

The opening work, the wild and uninhibited Semero Ikh – Seven, They Are Seven – evokes ancient Babylonian gods via the words of Russian poet Konstantin Belmont. Composed in the cauldron of Revolution it waited to be heard until 1924, also in Paris; it includes texts from 1917, but also lines from Stalin’s constitution. Prokofiev hoped that Cantata for the Twentieth Anniversary of the October Revolution would be accepted as a suitable commemorative work by the authorities in 1937, but those authorities (Stalinist apparatchiks) were stupefied and suppressed it. It had to wait until 1966 (thirteen years after its composer’s death) – and even then was truncated (Stalin’s texts no longer deemed to be suitable).

Ashkenazy generously rehabilitated them, in the Concerto with the quixotic help of Pekka Kuusisto, alive to every possibility of the solo part: whispering here and scarping horsehair on strings to grating effect there (with many broken hairs dispatched into the air). A few intonation gremlins at the beginning apart, Kuusisto weaved a magical spell through what was the concert’s eye of the storm – respite from the cataclysmic events that the two choral works depict. The Philharmonia accompanied beautifully. Not surprisingly Kuusisto returned with an idiosyncratic encore – at least partially on-message with its Russian theme – a murmured, hummed and whistled improvisation on ‘Moscow Nights’ (dear reader, I failed to catch the name by which the tune is known in Finland), attended by violin techniques unimagined by Prokofiev.

The concert started and ended in choral cacophony. For Seven, They Are Seven the steely tenor of David Butt Philip was on hand, his line miraculously scything through all Prokofiev, Ashkenazy and his large forces could throw in his way. It’s an eight-minute scream which even in its quieter passages has a snarling undertow which builds rapidly to percussion- and brass-led outbursts that conjoin fears of Babylonian supernatural enemies to twentieth-century Revolution and quite a slap in the face as well as packing a punch that should be heard more often.

It’s also an ideal partner for the October Cantata, which dispenses with a vocal soloist, but demands (for a couple of lines) a Lenin impersonator (here Aidan Oliver in a Lenin cap and using an old-style megaphone to bellow his words), a military band and – all-but-hidden amidst the strings – an accordion group providing a jaunty angle to some of the Cantata and certainly more prevalent in its later stages than I’d realised before. The only thing I missed was the siren, but there was no lack of things to listen out for…

While programme note and surtitles gave no indication of the ten separate sections, Ashkenazy made a case for an overall architecture, from the opening scene-setting of ominous, low-pitched grumbling, via the Nevsky-like, folk-inspired choral interjections and orchestral set-pieces to the penultimate symphony and final paean to the constitution. There was a wealth of vivid detail in the story-telling especially from the sixth section on, with genuine exciting narrative-thrust about how the proletariat hung on to achieve victory, and Ashkenazy teased out the colours to magnificent affect. And it’s fascinating to think that this overtly occasional work, maybe intended as a one-off, can now have lasting value as a commemoration of the events of 1917.