Seeing the Philharmonia Orchestra returned to its natural habitat is a heart-warming experience, like watching a captive lion freed from its cage at the zoo and allowed to roam the plains of Africa once again. The orchestra’s release back into the wilds of the refurbished Royal Festival Hall went off pretty smoothly, though the lithe and fearsome beast was clearly suffering a few stiff joints after its lengthy interment in the Queen Elizabeth Hall.

Opening the first ‘proper’ concert in the Royal Festival Hall – after the previous evening’s Gala – was a superbly realised account of Oliver Knussen’s Violin Concerto (completed in 2002 for Pinchas Zukerman). Its opening ‘Recitative’ saw violin and orchestra interspersing colourful starbursts of frenetic activity with a prickly pastoralism reminiscent of William Walton. The second movement, an extended ‘Aria’, seems to intentionally recall Shostakovich’s First Violin Concerto, with its dark, dreamlike string textures, wandering celesta, and intimations of a passacaglia underpinning the soloist’s soaring violin lines. The finale is an extrovert gigue that was occasionally undercut by brooding double basses and urgent orchestral outbursts, but it ends gently on a suspended high-note from the violin. In all, an engaging if slightly forgettable work, one whose colour and clarity of gesture were well served by the Hall’s newly reformulated acoustics. Hats off, too, to Christian Tetzlaff, who always plays new music as though it were core rep. 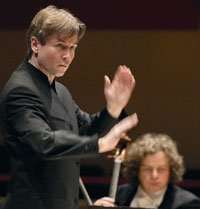 Esa-Pekka Salonen’s career as a conductor really began in 1983 when, at absurdly short notice, he was called upon to direct the Philharmonia in a performance of Mahler’s Third Symphony. He apparently learned the circa 100-minute score in just a few days, a feat that soon saw the man who primarily considered himself a composer suddenly in very hot demand as a conductor. Such demand has hardly abated, and with Salonen due to take charge as the Philharmonia’s ‘main man’ next year, it seemed only natural that he and the Philharmonia should revisit their first collective triumph on a special occasion such as this.

But Salonen is not a natural Mahlerian and his account – good-natured and well-intentioned though it was – failed to convince that 24 years in the symphony’s acquaintance has produced any great insight into the music.

The enormous first movement was probably the best thing about it, beginning with some heroically secure playing from the eight horns and working itself into a pleasingly high-spirited tumult for the great march that eventually succeeds in overwhelming the movement’s more solemn proclamations. Salonen conducted with a smile throughout and the orchestra responded likewise, suggesting perhaps that Mahler was only half-serious when he wrote those dramatic contrasts of craggy expansiveness and carefree merriment. I’m not sure I buy that Mahler ever did anything half-seriously, even when he was having fun, but there you go.

The rest of the symphony suffered more substantially from the general party atmosphere. For a start, there were some uncharacteristic lapses of ensemble from the orchestra, with missed or late cues all over the place. On the flip-side, Salonen was a bit too controlling in passages where a little more raucousness might not have gone amiss, for instance allowing some unforgivably bland playing in the peasant-like dances that permeate the second and third movements.

A couple of excellent soloists saved the day before the finale, thankfully: Alistair Mackie’s astonishingly pure offstage trumpet in the third movement and Michelle DeYoung’s mezzo in the fourth. To be honest, the former can’t really fail to make an audience swoon, but it sounded truly sublime in the revamped acoustic. As for DeYoung, she has a lovely tone and sang Mahler’s Nietzsche setting beautifully, but it could be argued her voice quality isn’t really appropriate to what is really a contralto part.

A short but diffident contribution from three small choirs in the attractively naïve fifth movement and we were onto the Adagio finale, one of Mahler’s most spiritually elevated creations. The strings had clearly been saving themselves up for its hushed opening, playing with heretofore unseen levels of concentration and commitment; when a solo oboe joined in their lament it provoked the most emotionally honest playing of the evening. But it also came a little too late – the sweet balm of this movement would have been so much sweeter had it followed 75 minutes of similarly vital music-making.