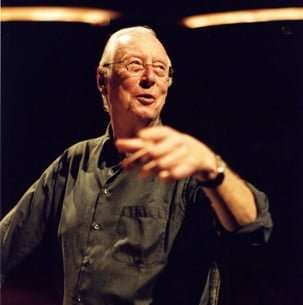 The celebration of Rameau’s work in this year of the 250th-anniversary of his death has ranged from his instrumental and choral compositions to his operas. In London two performances by the Orchestra of the Age Enlightenment and Les Plairis des Nations brought Rameau’s contribution to ballet under the spotlight, with historically informed recreation of the choreography accompanying several stage works. In this concert Les Arts Florissants upped the stakes with its own colourful presentation of two rare one-Act opera-ballets, again bringing to the fore Rameau’s distinctive additions to the world of dance (and also in more or less Baroque realisations). More than the composer’s full-length tragédies-lyriques, these two works are principally vehicles for ballet.

The choreography and costumes for both took their cue from Daphnis et Églé (1753), being a pastorale héroïque, and so the dancers and chorus wore peasant-dress of the period, with the High Priest appearing like a scarecrow. In the first work, Daphnis and Églé discover the true nature of their close relationship once the Priest reads the situation as one of love rather than friendship. But the message, consistent with the theme of much French Baroque drama, is one of moderation, as Cupid draws out the moral: “love hides beneath a veil of friendship and all friends are lovers when close to the object they adore”. To that extent, it seems to be that of Montaigne’s famous description of friendship in his Essais, but looked at in reverse – love analysed in terms of friendship, rather than the other way around.

This theme was aptly realised through both the choreography and the musical performance. The former was well balanced with the dancers and chorus distributed evenly between the two sides of the stage, but the routines remained fluid and mobile. That was also true of the music, with William Christie’s direction of Les Arts Florissants ensuring distinctly vivid rhythms, but not so starkly contrasted as to become garish. The well-honed tone of his ensemble lay at the root of that, creating more than just a veneer of finesse, such as in the slower section of the Overture, with its suspensions and false relations languidly and tantalising brought out.

Similarly, the singers were in refined voice; Reinoud Van Mechelen’s tenor in the part of Daphnis was seamless, conveying the character’s emotional yearnings. Rameau’s music echoes the tension and resolution of the narrative in succumbing to a Classical restraint and order at the two moments when Daphnis and Églé sing together in recognition of the real nature of their feelings. The harmonious chains of sixths in their music anticipate the brief duets between Pamina and Tamino in The Magic Flute after their trials by fire and water.

There is even less singing in La naissance d’Osiris (1754) – a ballet allégorique intended to celebrate the birth of the ill-fated Louis XVI. The drama is simple – Jupiter reveals himself to announce the birth of Osiris, the great hero for whom the people have been waiting. At the beginning, while the people wait anxiously, the dancers were more dispersed, but harmony is restored in the subsequent balance where the protagonists come together in more symmetrical fashion.

However, there was a touch of erotic allure as both Jupiter (Pierre Bessière – initially up at one side of the Circle) and an unspecified male dancer appeared virtually bare-chested, the latter haunting the spectacle by hovering around the fringes of the main action with slower, gymnopédie-like gestures. The mysterious beauty of his lithe form seemed to suggest the miracle that is the bringing into physical existence of any human being. Allied to the complementary way in which the LAF expressed the passionate surges and ebbs of the music, and the pure singing of Sean Clayton and Magali Léger as a shepherd and Pamilie respectively (exhibiting a more straightforward form of love than Daphnis and Églé), all the facets of these performances combined to haunt the senses and the mind.