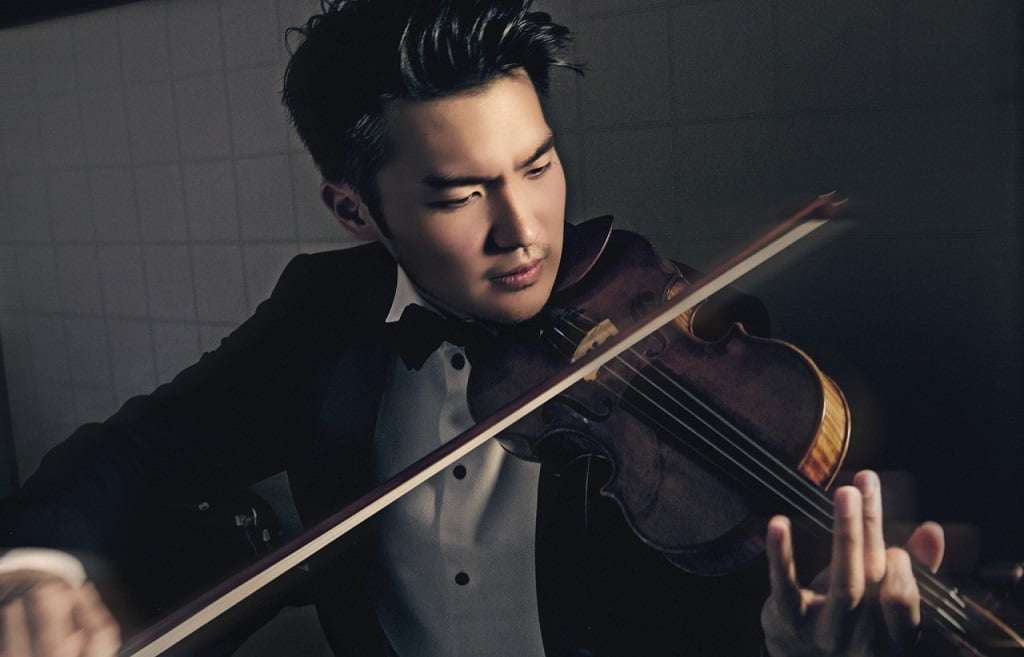 Ray Chen is a natural communicator, apparent from the videos he has created for social media, where he has proven himself a fine comedian, and during the relaxed, often humorous, commentary he gave from the stage during this morning recital. Even his facial expressions corresponded with the musical moods, and were entertaining in their own right. He is also a serious artist, with a flawless technique used in subservience to a mature musicianship that belies his youth.

The ‘Preludio’ of J. S. Bach’s E-major Partita was unflashy. Chen took it at a relaxed tempo, and drew a brilliant tone from the 1715 “Joachim” Stradivarius. His approach to Bach is romantic, with liberal changes in tempo and tone, and completely refreshing. He barely paused for breath between movements. In the ‘Loure’, his bowing was smooth and phrasing was tender, and the ‘Gavotte en rondeau’ was an elegant dance, each episode given a different tone. He boldly allowed his sound to become harsh at times, adding to the drama, and following the pair of ‘Minuets’, the ‘Bourée’ was forceful and celebratory, and the ‘Gigue’ ran the gamut from delicacy to radiance. There seemed to be millions of shades of color in his instrument. A couple of wrong notes in a brief memory slip at the very end only served to prove that he is human.

The ‘Chaconne’ from the D-minor Partita was given a similarly romantic treatment. The passionate opening chords were followed by ghost-like arpeggios and a huge build-up to the modulation into the major key. The middle section was a world in itself, starting slowly with wistful sadness, then growing into a triumphant climax before returning to the minor when a new timbre emerged, both rich and darkly haunting. At one point Chen highlighted the droning open string in arpeggiated chords instead of the melody, creating a sense of suspense laced with angst. He ended by bowing nearly on top of the bridge, creating superb intensity, thrilling to witness. In pre-performance remarks he spoke of the piece being Bach’s emotional response to his wife’s death (a theory that remains unproven).

Eugène Ysaÿe (1858-1931) was a Belgian master-violinist, who also excelled as a pedagogue (with pupils such as Enescu and Thibaud), a conductor (in his later years with the Cincinnati Symphony Orchestra), and a composer, his best-known works being Six Sonatas for solo violin modeled on Bach, all written in 1923.

In Sonata No.2, written for Thibaud, Ysaÿe in the first movement mingles obsessively the ‘Preludio’ of Bach’s E-major Partita with the medieval ‘Dies irae’ chant. Chen elicited different colors while maintaining a powerful undercurrent. The ‘Malinconia’ featured his singing, seamless legato, the ‘Dies irae’ bringing a serene sense of sadness. In ‘Danse des ombres’ he was unrestrained in his virtuosity, but still brought life to the hidden melodies, and in ‘Les furies’, another dissonant riffing on ‘Dies irae’, there was a return to the initial intensity.

Chen was in his element introducing Nathan Milstein’s Paganiniana. He spoke of the blood, sweat, and tears expended by students mastering Paganini’s Caprices and reckoned Milstein put all the most difficult parts into this one piece. Chen then hammed it up with some preparatory muscle stretching but wowed us with his exquisite rendition. At times the brisk tempos pushed the limits of playability, but he still achieved perfect clarity. As an encore, Chen played some “original” Paganini – Caprice No.21. His banter was witty while describing the treacherous up-bow staccato technique this Caprice requires. No remnants of this battle were apparent in his flawless account.

Ray Chen could well be the spokesman of classical music for the millennial generation. His mastery of social media and of the violin all violinists covet makes for an artist just waiting to blow up in our celebrity-obsessed world.