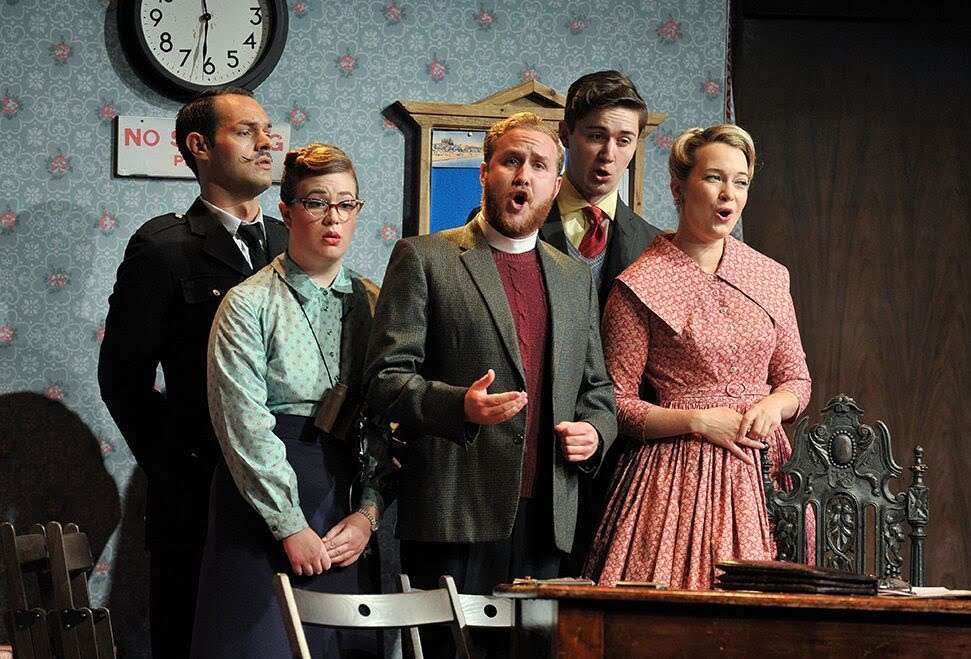 Oh Lordy, I thought, as I ran through the cast list of the Royal College of Music’s end-of-academic-year staging of Benjamin Britten’s comic opera, Albert Herring, there’s one of those additional, modish, invented roles for someone called ‘The Outsider’. Is Britten’s and Eric Crozier’s modest tale of self-discovery in a Suffolk village about to get a significant existentialist make-over? However, ‘The Outsider’, a silent, moody, leather-jacketed piece of James Dean-style rough, turned out to be one of the subtler elements in a staging that couldn’t resist making explicit what has got by with being happily implicit.

Among the more extreme points made by Liam Steel were Albert – pressed into service as May King because not one of the local Loxford girls was virtuous enough – appearing in a white frock as May Queen; the local Nob Lady Billows and Albert’s mother getting royally drunk together during a gruesome tableau of depravity presented during the Act Two interlude; the Mayor trying out the potential of ‘The Outsider’ as a rent-boy; and this added-in character whistling Peter Quint’s eerie siren-call to Miles to join him on the dark side (from The Turn of the Screw) as Albert braces himself for his bid for liberation. Yes, we know that Albert, in his way, is just as much an outcast as his near-contemporary Peter Grimes, and that Albert’s going AWOL is his version of ‘coming out’ – not necessarily as gay, though, as has been suggested and is allowed for in Steel’s staging. I can live with his crude exposé of hypocrisy and double-standards in deepest Suffolk, but the point of Albert in a frock…? The straw that breaks this camel’s back? 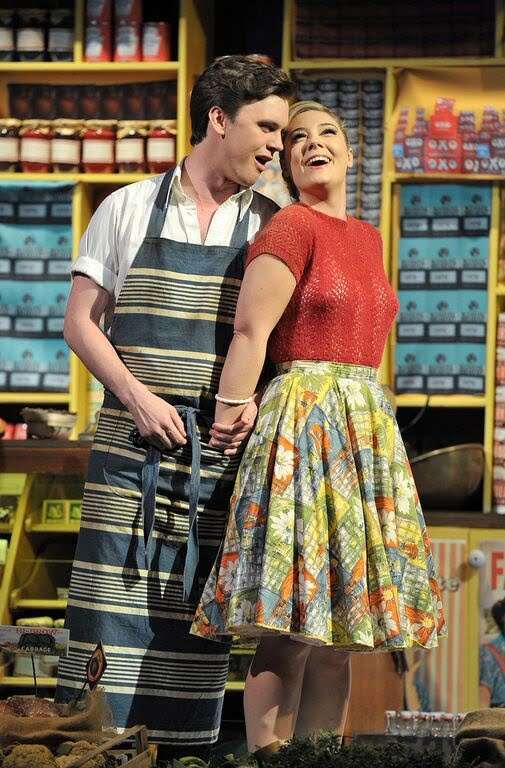 With such directorial larks, Steel’s otherwise traditional staging is unnecessarily destabilised. Anna Fleischle’s wondrous set and 1950s’ costumes neatly teases out the provincial feel of village shop and church hall, with rock ‘n’ roll and Technicolor just beginning to make headway against post-war gloom and British reserve. Wisely, director and designer didn’t attempt the grandeur of Lady Billows’s drawing-room for the May Queen committee meeting in the first scene, placing it instead in the church hall.

With its series of comic vignettes and strong leads, Albert Herring is a frequent conservatoire opera, so that its vital youth versus age tension gets ironed out. But the four singers playing the quartet of local worthies made a good fist of middle-aged solidity. Julien Van Mellaerts as Mr Gedge (the vicar) was the most natural, pursuing the headmistress Miss Wordsworth with glutinous sincerity and some lovely singing. Natasha Day’s Miss Wordsworth was, puzzlingly, a glamorous Grace Kelly-type blonde, but coping impressively with all the wistful, fragile stuff Britten loads onto his not always benign coloratura send-up. Matt Buswell added some G&S gravitas to Superintendent Budd, Loxford’s ponderous Plod, and while Joel Williams looked more like a head-boy than town mayor, his elegant tenor was total pleasure.

Janis Kelly’s Lady Billows was more of a local busybody than terrifying, grand guardian of public morals who simply assumes her social superiority. Kelly had no problems with the role’s angular, often high-lying music. There were passages when she seemed under-directed, and in general words vanished, to the extent that I yearned for surtitles. Her long-suffering, hapless sidekick Florence was played with priceless misanthropic relish by Polly Leech. Mrs Herring, an underwritten role that hardly explains her son’s craven subjugation, was, if anything, over-directed, with Amy Lyddon ‘going to town’ with grotesque outrage. The Mrs Herring I imagine wouldn’t have dreamed of greeting Lady Billows in curlers and face-pack.

Nick Pritchard’s Albert easily presided over the whole evening, his authority, pace and characterisation never in doubt. His drunken soliloquy revealed how skilfully he’d kept us waiting for him to take control, and his warm, lithe tenor did the rest in charm, melancholy and intensity. In its restrained way, it was a knock-out performance, and those don’t come around so often. I also greatly enjoyed Catriona Hewitson’s Albert-struck Emmie, a winning rendition that caught all the dumb agony of growing up, and again summing up the essence of the opera.

Those who might get stuck on Albert Herring as stylistically anonymous with parody overplayed to the nth degree would have changed their mind hearing the quality of the instrumental playing, which managed both to suggest the influences Britten was juggling at the time and their assimilation into his style. It was outstanding, fresh and full of affection. Michael Rosewell had prepared the musicians well.