The Light in the Piazza
Musical in two Acts, book by Craig Lucas, music & lyrics by Adam Guettel, based on the novel by Elizabeth Spencer and MGM’s 1962 film [sung in English and Italian] 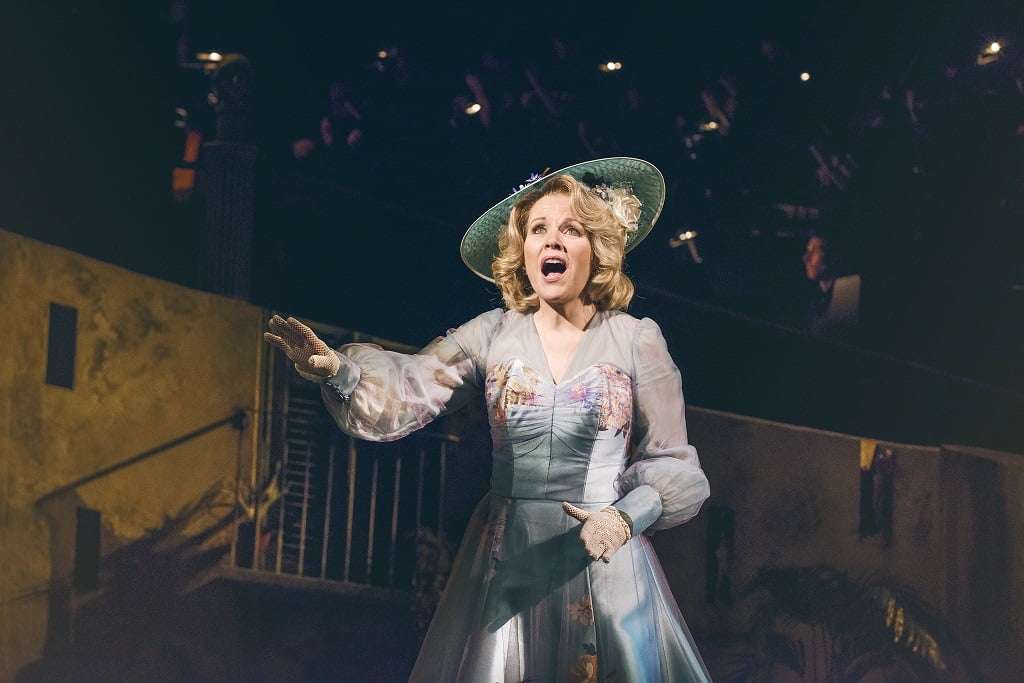 There was a definite buzz in the foyers of the Royal Festival Hall on press night for John Berry and Anthony Lilley’s new company Scenario Two’s first production: The Light in the Piazza. An unusual sight was a merchandise stand, more so (for this venue at least) was the popcorn on sale (thankfully no chomping was heard during the performance).

Inside the auditorium the stage was transformed with Robert Jones’s sweeping set, a curved wall, rising diagonally before ending stage-right with a naked male statue. In front of the wall a circular mosaic dais, with space on the forestage for a scooter to occasionally ply back and forth. Above and behind this open set, the advertised thirty-four-piece Opera North Orchestra (forty-two counting up the personnel in the programme) sat on three levels shrouded in black drapes: piano and basses at the lowest level, with two layers of higher strings above stage-left, wind and percussion to the right, with Kimberly Grigsby dead-centre.

As produced by Daniel Evans (no mean Olivier Award-winning musical actor, formerly director of Sheffield Theatres and now Chichester Festival Theatre), Craig Lucas and Adam Guettel’s adaptation of Elizabeth Spencer’s novel and subsequent 1961 MGM film The Light in the Piazza eschews it’s slim plot and brings some Italianate warmth to a typically unsettled British June (thunderstorms threatening). Helped by some starry casting – Renée Fleming and Marie McLaughlin and two of Britain’s finest actors, Alex Jennings and Malcolm Sinclair – Evans’s attention to detail focuses the story of American mother Margaret (Fleming) who, in the 1950s, is chaperoning her daughter Clara (Dove Cameron) around Florence. Clara meets Fabrizio (Rob Houchen) and, despite their lack of expertise at each others’ language, fall for each other. Margaret is overly protective of Clara after a childhood injury from a Shetland pony, and the thought of her daughter in a relationship is unconscionable, and – despite having met Fabrizio’s father (Jennings) – she sweeps Clara off to Rome. 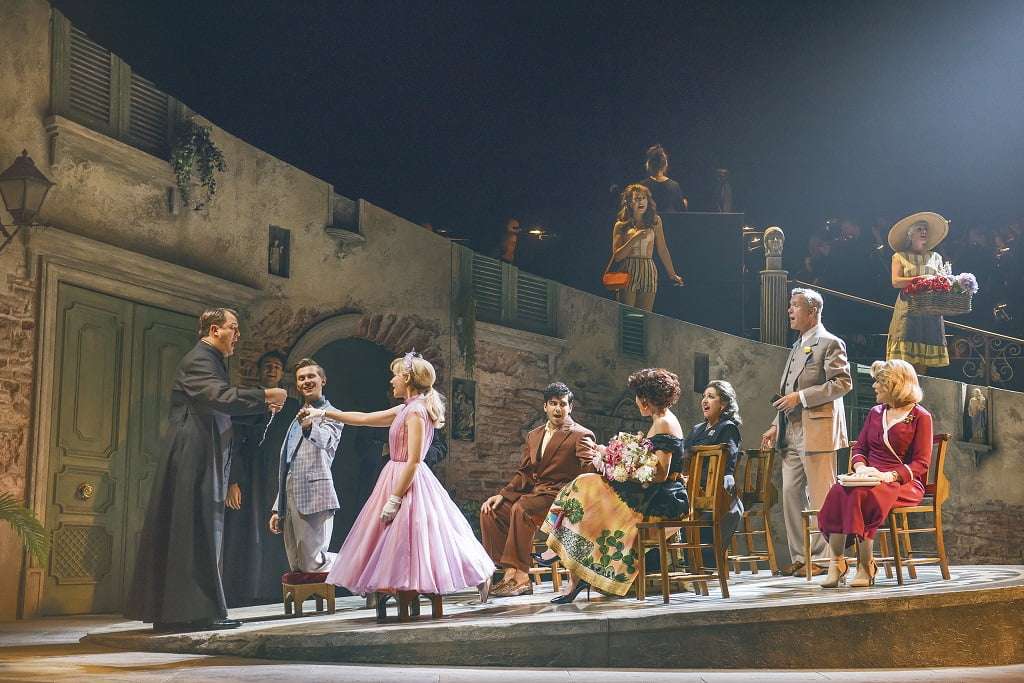 This is the 1950s, when mental disability was less understood, and you get the impression that Margaret is sublimating deficiencies in her marriage to Roy, here intimated through two trans-Atlantic phone-calls with the rather underused Malcolm Sinclair, to show concern for Clara, whose only indication of mental infelicity is a smiley naivety. Meanwhile Fabrizio comes from red-blooded Italian stock, headed by Jennings’s Signor Naccarelli. At least three of the numbers are in Italian, and all credit to the decision not to use surtitles: the production makes it clear as to the emotions expressed.

As it happens, it’s McLaughlin that has the strongest song. ‘Aiutame’ – as Signora Naccarelli helpfully explains – is an encapsulation of family politics involving everyday things such as love, jealousy, adultery, accusation…

Elsewhere, Guettel (Richard Rodgers’s grandson) has a penchant for easy-on-the-ear if not quite memorable melodies, with bags of atmosphere, though he struck lucky with the title song, as there’s a harmonic descent used setting the words “The Light in the Piazza”, as sung first by Dove Cameron, which will stay with me. Towards the end, as an understanding is made between Signor Naccarelli and Margaret that reverses the final hiatus in the marriage plans (Margaret thinks it’s the Italian family’s discovery of her daughter’s perhaps stunted mental development, but it’s something else, which it would be unfair to disclose), they sing ‘Let’s Walk’ – Fleming and Jennings meeting harmoniously in a very natural way. 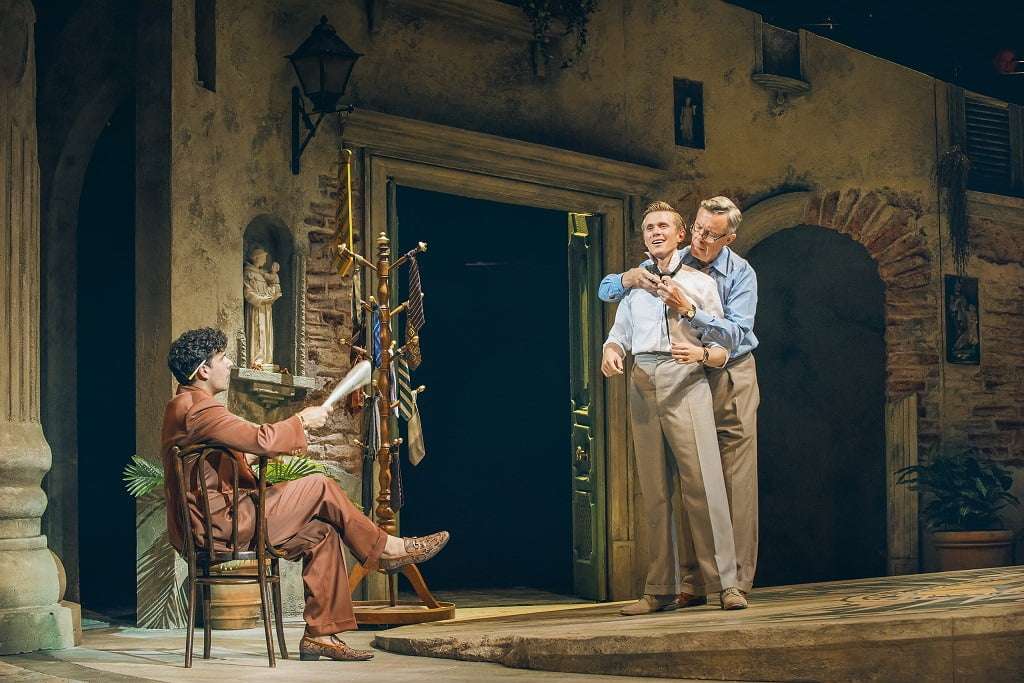 Fleming makes a believable Margaret, with a full bloom to her voice that is carefully controlled not to become overtly operatic. I’m sure she has a career in musicals as long as she wants (she has already appeared in Carousel). Cameron and Houchen are touching and truthful as the young lovers, while Liam Tamne and Celinde Schoenmaker offer a more-realistic view of how messy coupledom can become. The ensemble manage a myriad of characters from tourists, to street venders, to nuns, to priests and Brigitte Reiffenstuel’s succession of 1950s’ Italian fashions evoke the period exceptionally well.

I felt only one thing missing, I longed for one of those brilliant Italian blue skyscapes (not least as the programme cover illustrates one), but even Mark Henderson’s expert lighting can’t provide. Finally, there is a slight like of realistic bloom in the amplification of the orchestra, a dryness to the strings that thankfully my ear corrected within minutes.

You’ve only got until July 5 to bathe in The Light in the Piazza. After that you’ll have to visit Los Angeles or Chicago where the production moves later in the year.